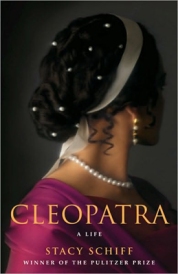 For each of us the name Cleopatra conjures up many vivid images… sensuality, seduction, beauty, the exotic, wealth, excess, Elizabeth Taylor.

While the legend of Cleopatra is prevalent, what has been buried over time is this incredible woman’s real tale. What we know of her today comes to us through the writings of pissy old dead guys.

In her book Cleopatra: A Life, Stacy Schiff attempts to sift through these accounts, many of which are brimming with Roman propaganda, to reveal a woman even more impressive than her modern day persona. I like to think of her as the O.B., the Original Bitch.

Cleopatra became Queen of Egypt at the age of 18, which meant she oversaw an entire nation’s people, economy, military, and foreign relations… yeah no big. As if that weren’t impressive enough, let’s take a look at some of the things she accomplished in her less than 4o years on Earth:

In addition to learning those kinds of fascinating tidbits, what I really liked about this book was Schiff’s take on how Cleopatra’s image was defamed and used against her, both in her time and throughout history.

Schiff argues that as an intelligent and savvy woman Cleopatra was seen as a huge threat, so instead her influence and power were attributed to her sexuality. Schiff clearly did her research thoroughly and draws on many different primary sources for examples.

Her style of writing is a unique blend of being scholarly and yet to the point, and sometimes humorous. It gives an energy to the ancient events she is writing about.

While I will always have a soft spot in my heart for Elizabeth Taylor’s dramatic and bejeweled Cleopatra, I find the real one to be a truly inspiring badass bitch.

Five out of five stars
Check it out at your local library!

Recommendation: 5 out of 5 (a rockin’ non-fiction book about the baddest bitch in the ancient world!)

6 thoughts on “Review: Cleopatra: A Life by Stacy Schiff”