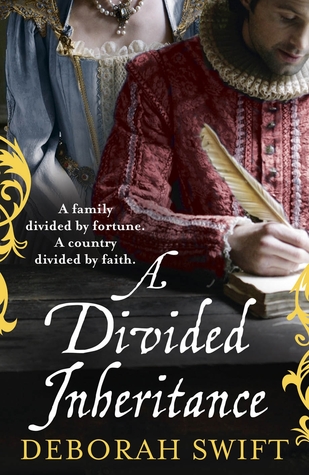 In 1609, Elspet Leviston plans on doing something most women wouldn’t dream of–she hopes to take over her father’s lace business.

In an age where most women only care about finding husbands and having children, Elspet wants nothing more than the learn the trade.

Since her father doesn’t have a male heir the odd of her taking over are pretty good–until a mysterious cousin shows up and starts helping her father with the lace business.

Zachary Deane has basically come from nothing. His mother was a prostitute and with three children. They had little money to support themselves but she had high hopes for Zachary. She told him if anything happened to her, he should find his father, Nathaniel Leviston.

When Zachary arrives at the Leviston house, Elspet is immediately suspicious of him. Her father tells her that Zachary is his sister’s son and now that she is dead, they are taking him in.

Nathaniel has never mentioned this distant cousin before and suddenly Zachary has become the center of Nathaniel’s universe while Elspet is expected to return to her womanly duties of calling on friends and looking for a husband rather than help with the lace business anymore.

Zachary clearly has no interest in the lace business, so Elspet suggests to her father that perhaps Zachary would learn more about the business by traveling abroad. Nathaniel agrees and sends Zachary on a grand tour of the continent away from the London distractions.

Zachary gladly leaves London, his true passion is sword fighting and he would much rather study the art in Spain the learn about the lace industry. When he leaves, Nathaniel suddenly dies. Elspet goes in search of Zachary, hoping to gain back the lace business.

This novel had a little bit of everything–romance, family secrets, and classic swash-buckling adventure!

Swift has consistently impressed me with her writing abilities. The first novel of her’s that I read was The Gilded Lily and I was captivated by all the historic research she did for it. She wrote knowledgeably about the period and the different plot angles in that novel and with this new novel, it met my expectations in every way.

Swift continued to demonstrate her knowledge of the period and showed her specialized research particularly with the lace business and the religious controversies of both England and Spain. I loved how Swift moved the setting to Spain for part of the novel. It gave the novel a unique exotic flavor that I couldn’t help but eat up!

It’s challenging enough creating a vivid, rich historic novel set in one location, but to do it in two locations and do it so superbly is nothing short of amazing!

It took me a long time to warm up to Zachary. The first part of the novel, I was equally as weary of him as Elspeth was. I didn’t trust him and I didn’t really feel any sympathy for him. But as the story went on, I found myself wanting to know more about him and excited to learn more about his character.

Elspeth was easily my favorite character though. She could have come off as spoiled had Swift not allowed us to see exactly where she was coming from and her circumstances. I never felt like she was ungrateful or spoiled thanks to Swift’s character creating abilities.

I loved watching how the relationship developed between the two and to see how it shifted and changed throughout the novel. I had to keep reading to find out what happened to all of the characters!

This book had a lot of action sequences in it too. There is a lot of fencing and sword fighting which is something I haven’t read a lot of. I don’t know a lot about the art of fencing but after reading this novel I do! Again I praise Swift’s ability to construct great details for the reader.

With all the sword fighting and action happening in the novel, I would say this is a historic novel that could be read by women or men. There is so much happening that I think both would enjoy reading this novel. Lots of religious conflict, history, action, and a little romance to sweeten the book.

The only issue I had with the novel was the beginning and set up to the story were a little slow going. It took me a few chapters to get into the novel which was more that I was expecting. I would have liked to have had a little less back story and a little more action to begin but overall it was a great read and a real treat for historic fiction lovers!

Monday, October 28
Review at Historical Tapestry and The Adventures of an Intrepid Reader

Wednesday, October 30
Review & Giveaway at Peeking Between the Pages

Thursday, October 31
Review at The Most Happy Reader

Monday, November 4
Review at Confessions of an Avid Reader

Tuesday, November 5
Guest Post at Confessions of an Avid Reader

Tuesday, November 12
Review at Reading the Past

Wednesday, November 13
Review at The Lit Bitch
Review at Let Them Read Books

Wednesday, November 20
Review at Oh, for the Hook of a Book!

Thursday, November 21
Review at The Musings of ALMYBNENR

Monday, November 25
Interview at Oh, for the Hook of a Book!

Tuesday, November 26
Review at So Many Books, So Little Time

One thought on “Review: A Divided Inheritance by Deborah Swift”