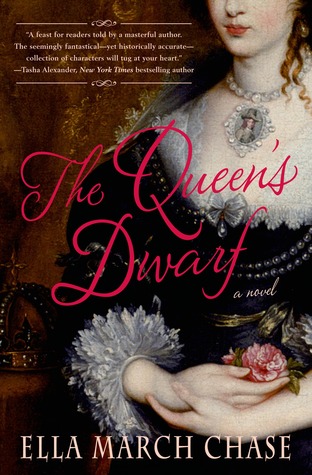 In the court of King Charles I, his homesick bride, Henrietta-Maria, longs to be back in the comfort of her French court.

To distract herself she has created a kind of sideshow to entertain herself with.

The Royal Menagerie of Freaks and Curiosities of Nature is a collection of sorts that consist of a giant, two other dwarfs, a rope dancer, an acrobat, animal trainer, and a special dwarf dubbed Lord Minimus.

Lord Minimus is actually Jeffery, a dwarf who has been trained by one of the most dangerous men at court, the Duke of Buckingham, to be a spy.

The Duke of Buckingham has taken Jeffery from his meager existence in a small village and dropped him into the dangerous English court but Jeffery soon begins to feel that his loyalties are a bit divided.

Even though he knows he is in a dangerous and unstable place, and should his heart betray his mission, Jeffery will be in a precarious position. He will be forced to choose between his mission and his heart, and it won’t be an easy one.

I can honestly say this novel is much different than anything out on the market currently. The main character, Jeffery Hudson, is based on a real life person and real life events.

I have read a lot of Tudor/Stuart era lit recently and a lot of it seems to run together without a lot setting one story apart from another, but this one sets itself apart from the genre.

Reading from Jeffery’s perspective was wonderful. When I initially read that the main character in this novel was a dwarf and a spy, I was a little skeptical of the idea. However, books like Game of Thrones have shown us that a dwarf can be a powerful and often overlooked attribute and compelling character.

Jeffery is cunning, cleaver, and reading from his perspective was a delight. I thought the author did a fine job bringing his character to life in this work of fiction.

I know it’s often hard to write a work of fiction based on a real life character. There is a delicate balance between what is historic fact or known about the character and how the author wants to portray them and portray how they will react to certain events within the story.

In this book, I thought the actions fit the character and time period and historic events very well. She also did a great job with the Menagerie as well. I can’t imagine how it must have been for Jeffery being more or less part of a freak show, more of a pet than anything else.

The Menagerie and supporting characters were well thought out and depicted which made the overall story enjoyable and interesting.

A couple of hang ups that I had was the pace of the book. It too me a little longer than I expected to get into the story. I thought this was going to be a much faster read but it started off a little too slow.

There was a lot of detail put into the story and characters but at times it felt like a little too much detail. For me it slowed the story down when it finally start picking up. That was a bit of a struggle for me and maybe a little more refinement might have been useful to help move things a long.

The suspense was a little too stretched out for me as well. Personally I liked the built up but then when I thought the climax was at its peak–it wasn’t. That style was a little off for me. I don’t think it would effect a lot of audiences but for me it was an unnecessary distraction.

That said, there is much to love in this novel! The story is an original one and much different from the typical run of the mill Tudor/Stuart novels. If you are a historic fiction fan or like this period in history, then you will find a lot to enjoy in this novel for sure!