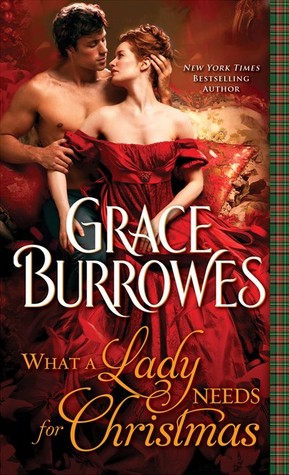 So here we are….almost to the holiday season and I have yet to read a single holiday book though it was on my ‘to do’ this year for reading.

That’s when this book came along for review…..I was originally looking for something like Lauren Willig’s Mischief of the Mistletoe but hey….I’ll take what I can get!

Since this month seems to be romance novel month for me…I figured this was better than no holiday read!

Lady Joan Flynn is heading to the Highlands in order to escape a scandal. A potential client of her’s got her intoxicated and attempted to take liberties with her.

Now she is making a run for the Highlands before her reputation can be tarnished. There she decides she must find a husband by Christmas!

Dante Hartwell is on his way to a house party in the Highlands when he spots Lady Joan looking for a seat on the train. When there is no room he in turn offers to help her by offering a seat in his car. Though but he is in trade, he is very ambitious and looking to further his position by hopefully gaining access to influential investors which is why he is attending the house party.

On the train, Lady Joan confesses her situation to him and he agrees to marry her. It will benefit them both…he gains an influential wife and he protects her from scandal. What neither expect is to find a true, mutual love for one another.

This was challenging for me to read. I didn’t necessarily know that this was part of a series….and other reviewers had said you didn’t need to read the series to enjoy the books….so I thought it wouldn’t matter. I was honestly lost for a while.

I found myself wondering why characters were doing certain things and how they all knew each other. It was pretty evident from the beginning that I needed to read the others in the series.

There were a lot of characters to keep straight and lots of back story that was completely lost on me. I wouldn’t recommend just picking this one up as a standalone.

As I’ve said before, I hate to give a lower rating on a book just because I haven’t read the series….however it does effect my enjoyment level of the book.

That said, I do love Burrowes’ writing style. She has a very fluid style with lots of descriptions but not so much that it bogs down the story. I can see why a lot of people like her books and I would definitely read more by her.

I thought the main characters were likable and their romance plausible….not overly engaging and riveting but I felt that the romance was believable and there was chemistry between them.

Overall I don’t recommend this book if you haven’t read the others in the series….however I would read more books by her because they writing style was different and enjoyable.

Book: What a Lady Needs for Christmas (MacGregors #4) by Grace Burrowes