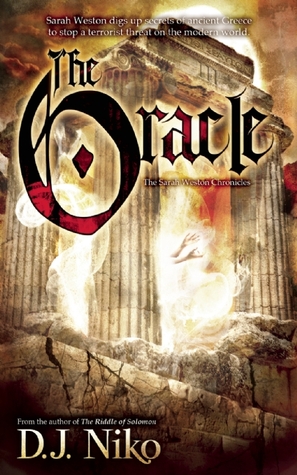 Sarah Weston’s latest adventures and archaeological pursuits have taken her to Greece where she is working with her American colleague (and sometimes romantic interest) Daniel Madigan, cataloging artifacts from a near by dig.

In Delphi, there is a cult of neo-pagans who have painstakingly recreated ancient rituals to glorify the god Apollo and deliver oracles to seekers from around the world.

When some antiquities are stolen from a museum in Thebes, Sarah Daniel are drawn into a dark plot….someone is using the Delphian oracle as a smoke screen for an information exchange, which could result in devastating consequences.

Sarah and Daniel are in a race against time and their own personal demons to uncover clues left behind by the ancients. Their mission is to locate the original stone marked with a lost Pythagorean formula. But will they be able to set aside there personal issues and work together before it’s too late?

I have really enjoyed the Sarah Weston books so far, and this one was no exception. There are a couple of things though that I would like to see change throughout the series though. With this being the third book in the series, I kind of expected a change in the ‘formula’.

I don’t think the separate ‘back story’ on the ancient relics is entirely necessary and I’ve seen Niko do this in all three books. On one hand I like that we are getting a break in the main plot because the ancient stories always follow an intense scene, but for me it’s more of a distraction and I would rather see it woven into the main narrative rather than having its own story.

I am also ready for Sarah and Daniel to just work things out already! They always seen to get things more or less ironed out in the end but all the personal drama around their relationship and the unresolved issues are starting to upset me and when I say upset I mean it in the best way possible.

I love both characters and I really want them to just get together and be happy already because they are just so perfect for each other and when I see them being ‘tested’ or trying to ‘protect’ each other I always feel so anxious that something will happen and they won’t end up together because of their egos!

All criticism aside, this is a wonderful read! I started the series out of order with book 2 and then went back and read book 1, as I said before in those reviews, I am happy that I started with book 2 because book 1 was a little more dense and slow and book 2 was more fast paced and refined. This book was even better than book 2. It moved a long very quickly and there was action filling every page.

As I have also said in my other reviews……the best way I can describe this series as a whole is that it’s a mixture of Lara Croft Tomb Rider,Indiana Jones, The Mummy, and The Davinci Code.

Since most of these are  film references, here are a few literary references that this series reminded me of– a modern day Amelia Peabody mystery meets The Davinci Code.

It’s full of riddles and codes like The Davinci Code, and it’s got the archaeological mystery mixed with the occult that made both Indiana Jones and The Mummy so popular, plus the action and a bad ass heroine like Lara Croft Tomb Raider!

Niko has such as vast knowledge of the ancient world and I am perpetually amazed at just how much she knows! Her knowledge and research brings authenticity and wonder to the story.

This is a wonderful series and I can’t wait to see where Sarah ends up next!

One thought on “Review: The Oracle (The Sarah Weston Chronicles #3) by D. J. Niko”