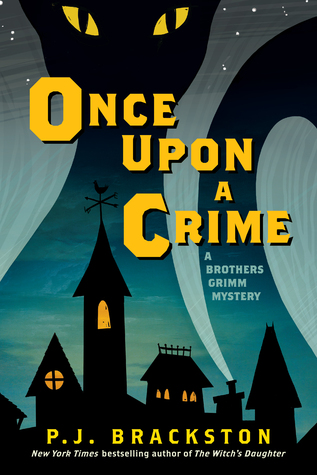 Gretel (yes, that Gretel) is a plump 35 year old woman, still living with her brother Hans and working as a private investigator.

She has just received a new case….while it’s nothing glamorous, it is still a case. Gretel is charged with finding three abducted cats. Not three missing cats….three stolen kitties! Her client assures Gretel that the cats would never just run away, someone must have taken them but she has no idea why.

Reluctantly Gretel accepts….she feels that her skills would be better suited for something better, but she takes the case anyway.

In the mean time, the small Bavarian town of Gesternstadt is about to be rocked to its foundations by a murder. The workshop of a local cart maker is burnt to the ground and Gretel’s nemesis, Kapitan Strudel, is called in to investigate.

Gretel pauses to greet Strudel and see what she can find out about the fire, when she discovers a body in the ashes…..a body that is missing a finger and holding a bell from one of her client’s cats! Could it be coincidence? Did the cats die in the fire? Did the person die trying to save the cats?

Gretel would much rather be investigating this murder but Strudel won’t allow it, so she must focus her energy on the case of the missing–ahh stolen–kitties. But while she is investigating the kitties disappearance, she begins to realize the two events are linked.

Soon Gretel is caught up in a dangerous world of trolls, kidnappings, and murder. Gretel turns to her brother to help her when she is accused of kidnapping the Princess Charlotte, to help clear her name and then find the missing kitties before they meet a terrible fate!

This book combined some of my favorite things….fairy tales and murder mysteries. It was really cute and a fun little escape. It took me a bit to sort some things out since this is the second book in a series, I felt like I was missing a couple of things in the landscape, like how did she become a private investigator in the first place?

As far as the dialogue goes, I struggled a bit with some of the statements. For example, this book is supposed to be set in the 1700s Bavaia…..did they have vodka martinis then? There were lots of little things like this that seemed more like modern dialogue and unlikely in the historic period. Same with some of the hygiene things….people in the 1700s just didn’t care that much about personal hygiene etc.

But once I accepted the fact that this story was a fairy tale and anything could happen in a fairy tale so I just took it at face value and tried to let it not annoy me…it was hard but I tried. Sometimes I just wanted to scream ‘that’s not historically accurate’ but this wasn’t marketed as a historic fiction novel so in the end I just had to let it go and enjoy the story.

Also the constant references to Gretel’s weight was kind of annoying. I don’t know that it added much to the story….it was lighthearted and comical at times but a couple of comments was plenty to get the point across.

All that said, I liked the magical/fantasy elements in the story and the overall premise. The mystery was enough to keep me interested. The book over all was cute and entertaining as well as funny. I liked that Gretel was a more mature heroine and she had a unique and quirky way of looking at things and the mystery. I liked her, I don’t know that I loved her, but I liked her enough to keep reading the book to see what happens next.

Brackston is probably best known for her ‘witch books’, which I love, and I thought this new genre (cozy mystery) was a fun little detour for her. She does a good job with fantasy, and while I liked this book just fine, I still think her strongest work comes from the witch books.

Book: Once Upon a Crime (A Brothers Grimm Mystery #2) by P. J. Brackston