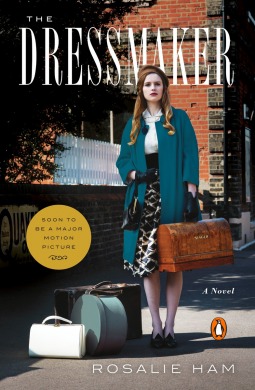 A darkly satirical novel of love, revenge, and 1950s haute couture—soon to be a major motion picture starring Kate Winslet and Liam Hemsworth

This novel is the perfect fit for the dog days of summer: Ham sets her tale of haute couture and revenge in small-town Australia, where the nosy neighbors think they know all your business and don’t like any of it one bit. Sometimes if you can’t beat the heat you have to embrace it, and this novel will have you steamed up alongside dressmaker Tilly Dunnage and the curious cast of characters that populate the town of Dungatar.

After twenty years spent mastering the art of dressmaking at couture houses in Paris, Tilly Dunnage returns to the small Australian town she was banished from as a child. She plans only to check on her ailing mother and leave. But Tilly decides to stay, and though she is still an outcast, her lush, exquisite dresses prove irresistible to the prim women of Dungatar.

Through her fashion business, her friendship with Sergeant Farrat—the town’s only policeman, who harbors an unusual passion for fabrics—and a budding romance with Teddy, the local football star whose family is almost as reviled as hers, she finds a measure of grudging acceptance. But as her dresses begin to arouse competition and envy in town, causing old resentments to surface, it becomes clear that Tilly’s mind is set on a darker design: exacting revenge on those who wronged her, in the most spectacular fashion.

THE DRESSMAKER is soon to be a major motion picture starring Kate Winslet and Liam Hemsworth. You can watch the trailer for the movie here (warning: a shirtless Hemsworth ahead).

Rosalie Ham was born, and raised in Jerilderie, NSW, Australia. She completed her secondary education at St Margaret’s School, Berwick in 1972. After travelling and working at a variety of jobs (including aged care) for most of her twenties, Rosalie completed a Bachelor of Education majoring in Drama and Literature (Deakin University, 1989), and achieved a Master of Arts, Creative Writing (RMIT, Melbourne) in 2007. Rosalie lives in Brunswick, Melbourne, and when she is not writing, Rosalie teaches literature. Her novels have sold over 50,000 copies.