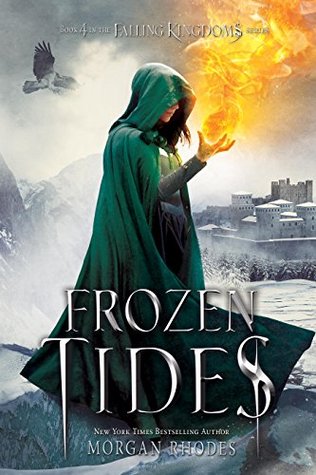 This book was one of the first books I’ve put on pre-order in a long time! I was originally only lukewarm with this series after the first book, but then things started getting really interesting in the following books!

So needless to say I was greatly anticipating the release of this novel!

The last time we were in Mytica, a lot of things were up in the air. Cleo and Magnus are in Limeros trying to figure out what to do now that Magnus has basically committed treason to save Cleo.

Felix and Jonas have parted ways and Felix is back working for the King of Blood while Jonas is fighting to stay alive and keep the rebellion going. Lucia has run off with the fire god and leaving a path of destruction in her wake. And Amara is back in Kreashia coming up with a plan to rule the world.

So basically there is a lot going on and a lot of people to catch up with in this installment. With so many characters to follow up on, for me the beginning of the novel started a little slower than expected.

I would say that the first 30% or so of this book was a little on the slow side. I had kind of expected this novel to start with a bang but instead there was less bang and more subtle crescendo. That said, the second half of the book was jam packed with action and plot advancement!

One of my favorite story lines is between Cleo and Magnus. I love seeing the tension between the two and was just dying to see them officially ‘hook up’ because frankly the tension is killing me! I was not disappointed in that regard! I think that Cleo and Magnus have great chemistry and I am now curious to see how their story advances in future books.

Some of the drastic plot twists, particularly Amara, left me DYING for the next book! I knew she was ruthless but I had no idea that she would be THAT ruthless and cunning. I can’t wait to see how that plot works out.

I think the plot line that I am not that interested in is Lucia’s. I know it’s a huge part of the overall story and I am sure it’s vastly important in many ways, but for me there is just something about her story that just doesn’t fully grab me.

Maybe in future books it will but for now it just isn’t. I think because there is so much going on with the politics of Mytica and the different kingdoms and Lucia is basically wandering around looking for magical landmarks…..I assumed that this book would be more about Lucia which I was excited about. I mean the fire goddess on the cover just suggested more would happen with Lucia but for me it just didn’t deliver….I felt like more happened on Kreashia and in Limeros with Cleo and Magnus! So hopefully more happens with Lucia in future books because I am intrigued by her character but I just don’t feel like I’ve connected with her or become completely taken by her story just yet.

That said this was a great installment to this series! There’s a ton of plotting, intrigue, double crossing, romance, adventure, and action that readers will enjoy. I can’t wait to see what happens next to some of my favorite characters! It’s been truly exciting to watch them all grow and change and evolve into these complex characters and the future of Mytica hangs in the balance…..I feel like we have a lot more story to uncover so I am looking forward to future books!

Come by the blog today and check out this wonderful historical fiction novel! This debut was great and I’m looking forward to reading more by this new author!
Today on my blog I have the latest installment of one of my all time fav series up for review! I love Veronica Speedwell so much. Come by and see what I thought of this one!
Today on the blog I have this stunning own voices novel up for special feature! Come by the blog and read all about it!
This is 40! Today is my 40th birthday and it feels like just yesterday that I was turning 21. I can't tell you how excited I am for a new decade though. To spread the birthday love I am doing a FLASH GIVEAWAY for a $40 Amazon gift card to one lucky follower to celebrate my birthday! ⁠⁠