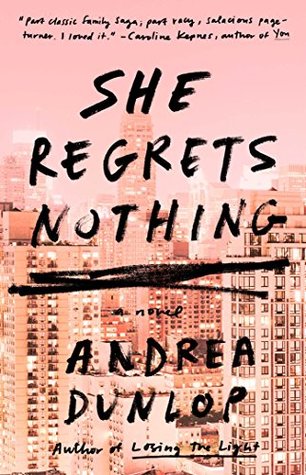 Lately I have had a desire to read a few more contemporary novels that are out of my traditional review genre. I have been particularly interested in books about ‘lifestyles of the rich and famous’ but with a darker twist.

That was what caught my eye about this book…..it sounded like something a little more complex than regular contempo lit. I liked that it featured the wealthy and privileged society but at the same time showed the seedier side of money. It was not a hard sell for me to read this book.

In the tradition of The Emperor’s Children and The House of Mirth,the forgotten granddaughter of one of New York’s wealthiest men is reunited with her family just as she comes of age—and once she’s had a glimpse of their glittering world, she refuses to let it go without a fight.

When Laila Lawrence becomes an orphan at twenty-three, the sudden loss unexpectedly introduces her to three glamorous cousins from New York who show up unannounced at her mother’s funeral. The three siblings are scions of the wealthy family from which Laila’s father had been estranged long before his own untimely demise ten years before.

Two years later, Laila has left behind her quiet life in Grosse Point, Michigan to move to New York City, landing her smack in the middle of her cousins’ decadent world. As the truth about why Laila’s parents became estranged from the family patriarch becomes clear, Laila grows ever more resolved to claim what’s rightfully hers.

Caught between longing for the love of her family and her relentless pursuit of the lifestyle she feels she was unfairly denied, Laila finds herself reawakening a long dead family scandal—not to mention setting off several new ones—as she becomes further enmeshed in the lives and love affairs of her cousins. But will Laila ever, truly, belong in their world? Sly and sexy, She Regrets Nothing is a sharply observed and utterly seductive tale about family, fortune, and fate—and the dark side of wealth (summary from Goodreads).

So let’s get the obvious out of the way, this is a book about rich, privileged people. So if you have a problem with that then you might not want to read this book. The characters live lives that most readers will only dream about and their ‘problems’ aren’t even on the same level as a normal person which makes some of the characters a little unreliable. But for me, I liked the glamour and glitz of the rich and famous. I didn’t care that their ‘problems’ weren’t really ‘problems’ in the normal sense, I knew what I was most likely going to get when I agreed to read this novel. Rich people problems.

This book was really meant to be a character study. Characters should have driven this novel and for me it fell a little short in that. Even though the characters were about as far from ‘average’ as you could get, I had a hard time really liking any of them. I don’t mind if there are characters that I don’t like but eventually I think that at least one needs to be able to redeem themselves, in this book that wasn’t the case. I didn’t really feel like there was very much character development or change throughout the book. The characters are complexed enough but there wasn’t really any development in my opinion.

I think what would have helped me enjoy the story more was an older heroine. Laila was 23, I am a good decade older than her, even though she was a character I loved to hate–I didn’t connect with her beyond that and I think a lot of that had to do with the fact that I am much older than her and am reading the story through the lens of a 30 something.

I did enjoy seeing how the other half lives and examining their lives, secrets, and issues. I know this comparison is going to sounds random, but I love Law and Order and I especially love when they have a ‘rich and famous’ scandal or murder. To me this book reminded me of a Law and Order episode set within the upper echelons of Manhattans elite. Even if the episode isn’t that great, I still love stories set in that unimaginable world that only admits the wealthy. And that’s what this book was for me….without the rich and famous backdrop I don’t think I would have liked it. This book was trying to envelop the reader in a world of glitz and glamour so even if the character development fell short, I still loved reading about the problems of the elite. I did keep reading because I wanted to know how it ended but beyond that I don’t know that I felt really invested in the characters.

Sure there were plenty of juicy, scandalous, and curious secrets that I think readers will like, but for me it landed in the middle. It was good but not great. Others might feel differently, but for me it was a solid 3 star novel.

Book: She Regrets Nothing by Andrea Dunlop

It's #stacksunday and I have this little stack of romance novels for you guys! I love historical romances but didn't really read many up until this year. But after Bridgerton I went on a historical romance bender! Love historical romance! ⁠⁠
I feel like there are some books that should just be read with wine. @candice_reads knows what I am talking about! I am not a huge wine drinker but I think this wine pairs well with this book! ⁠⁠
Come by the blog today and check out this well researched historical novel set in WWII Paris! I really liked this one and fans of WWII novels will surely find a lot to love in this one! ⁠⁠
This book was one I bought thanks to the gram! I saw it on a few of my favorite accounts and thought that it sounded pretty good. Plus it featured an exotic location and I was desperately needing a bookish vacation. ⁠⁠