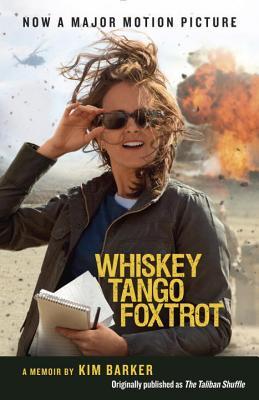 WHISKEY TANGO FOXTROT, the upcoming movie starring Tina Fey, Margot Robbie, Martin Freeman, Billy Bob Thornton and Alfred Molina, is based on Kim Barker’s memoir of her time reporting in Afghanistan and Pakistan (book originally published as The Taliban Shuffle).
To check out the trailer for this hot upcoming new film, click here.  Kim uses her sharp wit and humor to describe her dangerous and exciting time in these troubled countries in her book, WHISKEY TANGO FOXTROT (Anchor; February 23, 2016).
Kim first arrived in Kabul in 2002, with nothing more than a passport and a dire need for a translator. Despite the dangers and the shaky circumstances, Kim’s love for these countries grew, as did her fear for their future sustainability. After five years spent wearing a scarf, abiding by the cultural norms and traveling long hours on unpaved roads, Kim returns to America and is eager to tell of her long-lasting love story with these countries.

Praise for the Book

“Part war memoir, part tale of self-discovery that, thanks to Barker’s biting honesty and wry wit, manages to be both hilarious and heartbreaking.”
—Chicago Tribune
“Remarkable. . . . [Barker] has written an account of her experiences covering Afghanistan and Pakistan that manages to be hilarious and harrowing, witty and illuminating, all at the same time.”
—Michiko Kakutani, The New York Times
“Brilliant, tender, and unexpectedly hilarious.”
—Marie Claire

Kim Barker was the South Asia bureau chief for The Chicago Tribune from 2004 to 2009, based in New Delhi and Islamabad. Her book about those years, “The Taliban Shuffle: Strange Days in Afghanistan and Pakistan,” a dark comedic take on her time in South Asia, was published by Doubleday. The movie version, “Whiskey Tango Foxtrot,” will be released in March 2016, starring Tina Fey, Martin Freeman, Alfred Molina, Margot Robbie and Billy Bob Thornton.

Kim has received awards and honors from the following groups, some shared with colleagues: