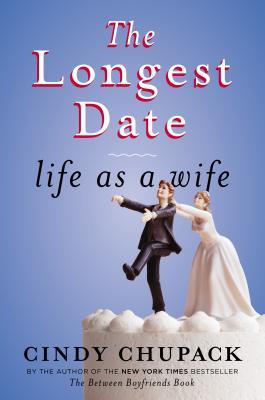 The best selling author of The Between Boyfriends Book and an award-winning writer for Sex and the City and Modern Family takes a hilarious and at times, a heartbreaking look at marriage in her latest novel, The Longest Date: Life as a Wife.

Chupack has spent much of her adult life writing about dating and relationships for several hit TV series and as a sex columnist for O, The Oprah Magazine. At the age of thirty-nine, she finally found The One—and a wealth of new material.

Marriage, Cindy discovered, was more of an adventure than she ever imagined, and in this collection of essays she deftly examines the comedy and cringe-worthy aspects of matrimony. Soulful yet self-deprecating,The Longest Date recounts her first marriage (he was gay) and the meeting of Husband No. 2, Ian.

After the courtship and ceremony, both Cindy and Ian realized that happily ever after takes some practice, and near constant negotiation over everyday matters like cooking, sex, holidays, monogamy, and houseguests. The Longest Date takes a serious turn when it comes to infertility.

As part of the upcoming release of this novel, I am honored to host not only a Q & A with Cindy Chupak but a giveaway that includes a paperback copy of The Longest Date for which I will post a seperate post for you to enter to win! For now, please join me in welcoming Cindy Chupak to The Lit Bitch!

A Conversation with Cindy Chupack

Q: You have written about dating and relationships for several hit TV series, including Sex and the City, and as a sex columnist for O, The Oprah Magazine. Did something in particular inspire you to write THE LONGEST DATE at this point in time?

A: I dated (or didn’t date) for what seemed like forever — long enough to have material for all of those TV shows and columns — so when I married Ian, at 40, I was wishing we could have five years just to be a couple.  But we didn’t have that kind of time, because we needed to try to have kids right away.  Or so we thought.  As it turned out, we spent five years and then some “trying,” and it was, in fact, trying, so I decided to write this book about what I’d learned (and was still learning) about the humbling, humorous and sometimes horrifying experience of life as a wife.

Q: As it turns out, your first husband was gay and then you found Ian, your second husband, at the age of 38. What kind of mindset were you in after your first marriage ended and did you expect to get married again?

A: I felt like a failure when my first marriage ended. I was 27.  We’d only been married two years, and it was a big, fancy wedding with lots of guests, which just meant more people who would need an explanation.  Him realizing he was gay at least meant there was nothing I could do about it; I didn’t feel like “if only I tried harder,” but no matter how original or colorful your reason for divorce, you still feel like damaged goods, or at least I did.  At first, when I started dating again, I only dated men who were superstraight – guys who watched football and drank beer and didn’t have much to say to me, wouldn’t shop with me, who were basically kind of boring.  Eventually I trusted myself to date a wider variety of men who were wrong for me for a wider variety of reasons, which gave me a lot to write about, so that was kind of a bonus.  When I was writing Sex and the City, I felt like every other single woman.  The fact that I had been married seemed like a blemish on my record, but it didn’t make me feel any more or less prepared to find love again, or to be married again.  In fact, I remember feeling annoyed when I had to check the box for “divorced” instead of “single.”  I never understood why it mattered.  I was single for all practical purposes – just single with baggage.  And what single person doesn’t have baggage?

Q: Although the subject matter of THE LONGEST DATE is quite serious at times and even tragic, your voice is incredibly funny throughout.  How are you able to simultaneously convey both emotions so well? Where does your comedic side come from?

A: I think humor is how I cope.  I can get through almost anything knowing SOMEDAY I will laugh about it, I will see what is human and humorous even if it was terrible in the moment, I will test the story on my friends whose laughter will help me find my own… maybe someday I will share the story with an audience.  You can’t find the comedy in tragedy while it’s happening.  You have to get through it, not around it.  But writing this book was very cathartic for me, because in writing about some very tough times, I was able to see the journey Ian and I were on more clearly, including the humor and the heartache.  I hope this book helps others see that there is not only a light at the end of the tunnel, but maybe a lightness as well.

Q: How have people in your personal life (specifically Ian) responded to THE LONGEST DATE? Did you ever hesitate to be so candid about your relationship?

A: I always let Ian read what I was writing to make sure he was okay with it.  He was very game, maybe because no matter what I wrote about him, he always came of sounding dreamy.  That started when I wrote the book proposal.  Every editor who wanted the book wanted to meet Ian.  Then as I was writing the book, I tested a lot of chapters at spoken word events around Los Angeles, and whenever Ian was in the audience, afterwards, people would act like he was the hero of the story!  This continues to baffle me, because I did not set out to write a great personal ad for my husband, but I fear that’s what I’ve done.  So I made him promise not to leave me for someone who read the book and fell in love with him.

Q: You had quite the fairytale wedding proposal. Could you tell us the story?

A: We were in L.A. from New York, because Ian (a lawyer) was taking the California Bar Exam (which was romantic enough)!  Ian taking the Bar exam meant he was willing to leave New York for me, which is no small thing.  I didn’t want to leave NY either, but my work was in LA.  So he’d been studying like mad, and he kept saying the day after the exam was “glass-off” (which he explained as some kind of incredible surfing conditions) and that he would be surfing with his friend Jon at sunset.  Meanwhile, I had fixed up my friend Liz with someone I had never met myself — my dad’s friend’s son, so Liz wanted me “to meet the guy I wanted her to meet,” and we were all meeting at sunset on the beach, and instead, it turns out, that was a ruse to get me to the beach where Ian arrived on a white horse, dressed as a knight in shining (rented) armor.

Q: After the courtship and the ceremony, you and Ian realized that happily ever after takes some practice, and near constant negotiation over everyday matters like cooking, sex, holidays, monogamy and houseguests. Could you share some advice?

A: Start making a list of everything you ABSOLUTELY WILL NOT DO, and then keep that list handy as issues come up in your marriage so you can check off the items as you do them.

Q: Was it difficult transitioning from writing for TV to writing a memoir?

A: I have always loved writing comic first-person essays, so for me, it will be more difficult transitioning back to writing TV and film.  I love writing to any length that seems fitting, in my own voice, being my own censor (or lack of one).

Q: Was it difficult to relive certain moments that you discuss in THE LONGEST DATE?

A: One chapter especially, Vow Now, is a difficult chapter.  I never read it aloud until I was recording the audiobook, and reading it then, into a microphone, with people in the booth listening, I realized how vulnerable I felt, how revealing it truly was, and how hard it was to relive it.  It was also hard to imagine that I was sharing it with a wider audience.  I suddenly felt very naked, in part because I know that what I went through, what Ian and I went through, wasn’t harder than what a lot of people go through.  It wasn’t the most horrible thing that ever happened to anyone, but it was our horrible thing.  And when you’re going through something like that, it doesn’t matter where you are on the scale of horrible, it’s your horrible.  And it still feels painful to relive it, but I feel it’s an important piece of the story.

Q: In THE LONGEST DATE, you are very honest about your struggle to conceive.  Do you have any advice for other families going through a similar experience?

A:  Although nobody can completely understand what you’re going through, don’t be afraid to share your hopes, fears and heartaches with your most loving friends and family.  You might be surprised to learn how not alone you are once you speak up.  And never say never.  Be open to Plan B, C, D and E before deciding (as only you can decide) what feels right for you.

Q: THE LONGEST DATE has already been optioned for a TV series with FOX.  Is there one part of the book that you’re most excited to see portrayed onscreen?

A: I’m excited to adapt The Longest Date for television (Jake Kasdan is directing), because I can take the best true stories, and also now fictionalize, and use other married writers’ experiences, and in that case, it’s nice to be able to hide behind fictional characters.  It gives you plausible deniability.  (That’s not how I feel about you, honey, another writer pitched that about her husband!)

Q: What is your next project either onscreen or off?

A: I’m about to direct my first movie, which is about mothers and their adult sons.  We’re filming in New York, and hopefully you’ll be reading more about it soon!