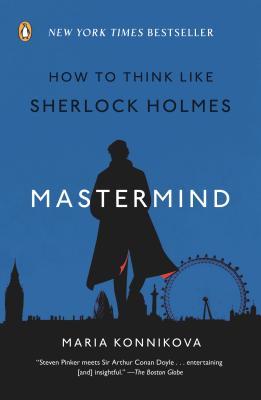 Who hasn’t wanted to know how to be as observant as Sherlock Holmes? Well after reading Mastermind, you might have a few new tips and tricks to help you be more observant!

Sherlock Holmes has been and will continue to be one of literature’s most popular characters. His wit and intelligence being two of the driving forces behind that popularity. His abilities aren’t super human–meaning anyone of us could learn his trademark deductive skills.

So needless to say that’s why I picked up this book for review. Who wouldn’t want to know how to be as observant and intelligent as Holmes? I don’t review a lot of non-fiction on my blog but with this I made the exception.

I was hoping that this book was going to be pretty straight forward, lots of break down and research about Holmes’s deduction and observation process. And while there was that basic structure, it was a bit overwhelming at times.

This novel read a lot like a research paper. There was a lot of theory and science presented that might intimidate the average reader. But that said, it was more or less presented in an understandable fashion.

Konnikova has an extensive knowledge of psychology which is no surprise because she holds a PhD from Colombia and is a graduate of Harvard University, so the reader knows that the author has a lot to offer in the way of information and theory.

I never found myself wondering if she knew what she was talking about, she clearly does and her topic was well researched and thought out. Her writing style was simple enough for the average reader to understand but at times I found some concepts and ideas repetitive.

She uses terms like System Watson and System Holmes to illustrate her theories. System Watson is the overlooking of details and jumping to conclusions based on what seems most likely at the time compared to the System Holmes–looking at everything reflectively and in a structured, disciplined manor before coming to a  logical conclusion.

I thought this was helpful to the reader, something familiar to keep their barrings. She also used examples of her theories from Holmes’s adventures to illustrate her point and prove her theory, which helped the reader for the same reason.

I will also point out, that if you haven’t read Sherlock Holmes and are planning too, this book contains a lot of spoilers so if that sort of thing doesn’t bother you, then read away but if you want to be surprised with Holmes’ mysteries then wait and read this book after!

This book isn’t a light read by any means. It is a novel that involves a lot of thinking and a lot of critical thinking etc. I didn’t “breeze” through this novel like I had expected, that’s not to say it wasn’t enjoyable though. It had a lot of useful information and interesting facts and theories that held my attention.

If you are looking to enhance your intellect and sharpen your mind then this is a great novel to get you thinking. Because the author uses a well known literary figure to demonstrate her theories, I think this would be a book that many would enjoy.

It’s a nice, not overly intimidating book to read and get you thinking about if anything is really just elementary.

Book: Mastermind: How to Think Like Sherlock Holmes by Maria Konnikova

2 thoughts on “Review: Mastermind: How to Think Like Sherlock Holmes by Maria Konnikova”