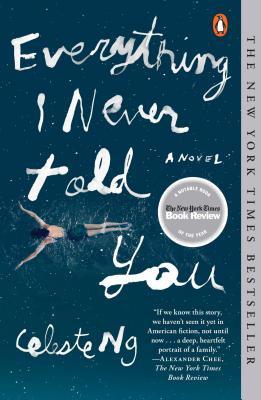 Here at The Lit Bitch we are celebrating the paperback release of Celeste Ng’s best selling novel EVERYTHING I NEVER TOLD YOU!

Celeste Ng is a rising star in the literary world. Her debut novel, EVERYTHING I NEVER TOLD YOU, published last year to widespread acclaim among critics and readers, was named a New York Times Book Review Notable Book and Amazon’s #1 Best Book of 2014, and is an Alex Award winner.

Now available in paperback from Penguin, EVERYTHING I NEVER TOLD YOU has been an instant bestseller, appearing on the New York Times bestseller list for five weeks and counting.

The extraordinary reception to the book has underscored Ng’s beautiful writing and her precise, haunting story of the Lees, a mixed-race family living in 1970s Ohio and the tragedy that may be their undoing or their salvation. When Lydia, the favorite middle child, is found drowned in the local lake, the delicate balancing act that has been keeping the Lee family together tumbles into chaos, forcing them to confront the long-kept secrets that have been slowly pulling them apart.

While EVERYTHING I NEVER TOLD YOU is informed by Ng’s own background—her parents immigrated to the U.S. from Hong Kong and raised Ng and her sister in Pennsylvania and Ohio—it is a stunning, timely work of fiction about the universal themes of family, grief, negotiating between cultures and generations, and the journey to find your place in the world. The Lees are a mixed-race family, but this is not a book explicitly about race; it’s about a family and their instantly recognizable, heartfelt struggles. Ng’s characters are complicated and endearing and their story unforgettable.

The Cleveland Plain Dealer praised the book as “Beautiful and poignant…Deftly drawn…It’s hard to believe that this is a debut novel for Celeste Ng. She tackles the themes of family dynamics, gender and racial stereotyping, and the weight of expectations, all with insight made more powerful through understatement…She has an exact, sophisticated touch with her prose.”

This week I will be hosting a fabulous giveaway for this stunning read to one lucky reader! I would also encourage you to check out Ng’s website as well as this wonderful book club kit!

Celeste Ng is the author of the novel Everything I Never Told You  (Penguin Press), which was a New York Times bestseller, a New York Times Notable Book, and Amazon’s #1 Best Book of the Year 2014. She grew up in Pittsburgh, Pennsylvania, and Shaker Heights, Ohio, in a family of scientists. Celeste attended Harvard University and earned an MFA from the University of Michigan (now the Helen Zell Writers’ Program at the University of Michigan), where she won the Hopwood Award.  Her fiction and essays have appeared in One Story, TriQuarterly, Bellevue Literary Review, the Kenyon Review Online, and elsewhere, and she is a recipient of the Pushcart Prize.

Currently, she lives in Cambridge, Massachusetts.