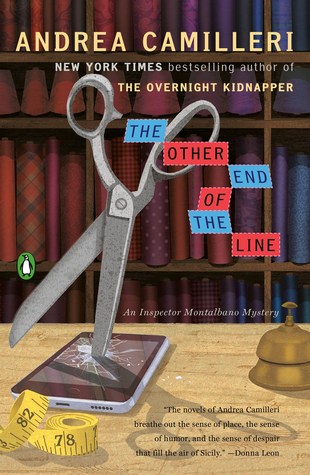 The Commissario Montalbano series has obviously been a successful one! This is the 24th book in the long standing series and it clearly has a large fan base and the latest book is out this week!

Author, Andrea Camilleri, has been widely praised for creating such a beloved character and series that is crafty and smart. Camilleri was 91 years old guys—-91. To be such a prolific writer still at that age is impressive and inspiring.

Though he passed away in July of this year, the fact that he has continued to write such an intelligent series is incredible and again, just so impressive. He leaves behind a huge literary legacy with beloved characters and devoted fans. His is a big loss for the literary community for sure!

This book is the 24th in the series with the 25th book coming out in March 2020. If you like crime novels you need look no further than this best selling series!

A wave of refugees has arrived on the Sicilian coast, and Inspector Montalbano and his team have been stationed at port, alongside countless volunteers, to receive and assist the newcomers. Meanwhile, Livia has promised their presence at a friend’s wedding, and the inspector, agreeing to get a new suit tailored, meets the charming master seamstress Elena Biasini.

But while on duty at the dock one late night, tragedy strikes, and Elena is found gruesomely murdered. Between managing the growing crowds at the landing, Montalbano delves into the world of garments, in the company of an orphaned cat, where he works to weave together the loose threads of the unsolved crimes and close the case (summary from Goodreads)

Andrea Camilleri (born september 6, 1925 in Porto Empedocle) was an Italian writer. He is considered one of the greatest Italian writers of both 20th and 21st centuries.

Originally from Porto Empedocle, Sicily, Camilleri began studies at the Faculty of Literature in 1944, without concluding them, meanwhile publishing poems and short stories. Around this time he joined the Italian Communist Party.

From 1948 to 1950 Camilleri studied stage and film direction at the Silvio D’Amico Academy of Dramatic Arts, and began to take on work as a director and screenwriter, directing especially plays by Pirandello and Beckett. As a matter of fact, his parents knew Pirandello and were even distant friends, as he tells in his essay on Pirandello “Biography of the changed son”. His most famous works, the Montalbano series show many pirandellian elements: for example, the wild olive tree that helps Montalbano think, is on stage in his late work “The giants of the mountain”

With RAI, Camilleri worked on several TV productions, such as Inspector Maigret with Gino Cervi. In 1977 he returned to the Academy of Dramatic Arts, holding the chair of Movie Direction, and occupying it for 20 years.

In 1978 Camilleri wrote his first novel Il Corso Delle Cose (“The Way Things Go”). This was followed by Un Filo di Fumo (“A Thread of Smoke”) in 1980. Neither of these works enjoyed any significant amount of popularity.

In 1992, after a long pause of 12 years, Camilleri once more took up novel-writing. A new book, La Stagione della Caccia (“The Hunting Season”) turned out to be a best-seller.

In 1994 Camilleri published the first in a long series of novels: La forma dell’Acqua (The Shape of Water) featured the character of Inspector Montalbano, a fractious Sicilian detective in the police force of Vigàta, an imaginary Sicilian town. The series is written in Italian but with a substantial sprinkling of Sicilian phrases and grammar. The name Montalbano is an homage to the Spanish writer Manuel Vázquez Montalbán; the similarities between Montalban’s Pepe Carvalho and Camilleri’s fictional detective are remarkable. Both writers make great play of their protagonists’ gastronomic preferences.

This feature provides an interesting quirk which has become something of a fad among his readership even in mainland Italy. The TV adaptation of Montalbano’s adventures, starring the perfectly-cast Luca Zingaretti, further increased Camilleri’s popularity to such a point that in 2003 Camilleri’s home town, Porto Empedocle – on which Vigàta is modelled – took the extraordinary step of changing its official denomination to that of Porto Empedocle Vigàta, no doubt with an eye to capitalising on the tourism possibilities thrown up by the author’s work.

Camilleri lived in Rome where he worked as a TV and theatre director. About 10 million copies of his novels have been sold to date, and are becoming increasingly popular in the UK and North America.

In addition to the degree of popularity brought him by the novels, in recent months Andrea Camilleri has become even more of a media icon thanks to the parodies aired on an RAI radio show, where popular comedian, TV-host and impression artist Fiorello presents him as a raspy voiced, caustic character, madly in love with cigarettes and smoking (Camilleri is well-known for his love of tobacco).

He received an honorary degree from University of Pisa in 2005.