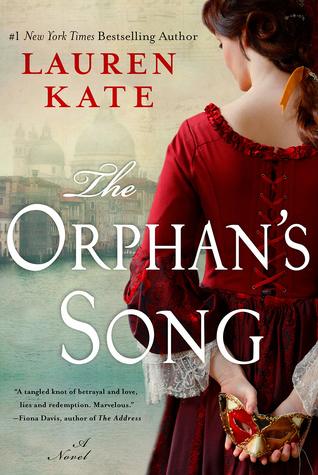 Lauren Kate is probably best known for her young adult series, Fallen. I haven’t read the series but I do know her books and had them on my TBR. This book, The Orphan’s Song, is her first attempt at adult historical fiction.

When it came across my desk for review a couple of months ago, I met it with mixed emotions. On one hand I was excited for the book because it sounded fun and clearly she’s an experienced author. Not to mention this cover is to DIE for! But I also had reservations because sometimes the transition from YA to adult fiction isn’t always a smooth one.

But in the end curiosity won out and I went into this one as a blank slate. As I mentioned I haven’t read her Fallen series so I have no idea how they compare but I was eager to see how this book was!

A song brought them together.
A secret will tear them apart.

Venice, 1736. When fate brings Violetta and Mino together on the roof of the Hospital of the Incurables, they form a connection that will change their lives forever. Both are orphans at the Incurables, dreaming of escape. But when the resident Maestro notices Violetta’s voice, she is selected for the Incurables’ world famous coro, and must sign an oath never to sing beyond its church doors.

After a declaration of love ends in heartbreak, Mino flees the Incurables in search of his family. Known as the “city of masks,” Venice is full of secrets, and Mino is certain one will lead to his long-lost mother. Without him, the walls close in on Violetta and she begins a dangerous and forbidden nightlife, hoping her voice can secure her freedom. But neither finds what they are looking for, until a haunting memory Violetta has suppressed since childhood leads them to a shocking confrontation.

Vibrant with the glamour and beauty of Venice at its zenith, The Orphan’s Song takes us on a breathtaking journey of passion, heartbreak, and betrayal before it crescendos to an unforgettable ending, a celebration of the enduring nature and transformative power of love (summary from Goodreads)

This was a difficult one for me to review. On one hand, I love historical romances and this should have been one that swept me off my feet, but it ended up being a little too cliche for me. On the other hand I thought the characters had a lot of chemistry, I think what troubled me most was the speed at which the characters were completely in love with each other. I felt like the book had barely begun and they had only met a couple of times and then—boom—they were completely smitten with each other. For some reason that just came across as a little cliche with the ending being rushed and a little too neat. I personally love the chase element of historical romances and I was hoping for a little more when it came to their courtship. They had great chemistry to be sure, but I would have liked to have seen her capitalize on that a little more by building up their romance.

The other thing I really enjoyed about this book was the setting and I thought the writing was pretty good. I couldn’t tell if at times the writing showed that she had a background in YA novels or if I noticed it because I knew she wrote YA novels first. Either way at times the writing was a little juvenile but overall I felt that she did a nice job with this adult debut. This is a coming of age story so maybe parts were meant to be more youthful than others. It was hard for me to decide which.

Overall the setting and historical period won me over. I adored the historical period and thought Kate did a great job at creating a realistic feel for Venice at that time and I enjoyed ‘exploring’ the period and city. While this book was a little on the predictable side, I still thought it was a worthwhile read and I enjoyed my time spent with the characters and am excited to see what the future holds for Kate’s adult historical romances!