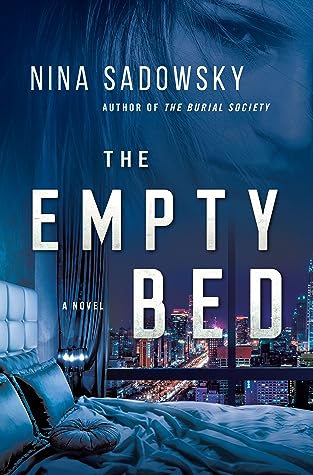 The Burial Society was a book that was released last year that I tried to work into my review schedule but I just couldn’t swing it. I had no idea that it was going to be turned into a series but I am thrilled to see that this new release is a follow up the Sadowsky’s acclaimed novel!

Since I hadn’t read the first book in the series, I opted for a feature instead, as I feared that I might be a little lost in the series. I had seen a few reviews stating that it could be read as a standalone but that reading it as a series made more sense and allowed the reader to connect with the characters more.

So that’s what ultimately swayed my opinion to do a feature on this one instead. Though this series sounds like it’s a thrilling ride to be sure! If you love modern thrillers then this will likely be a book you need on your radar as your winter reading draws to an end! It is out tomorrow so be sure to check it out!

Catherine excels at helping desperate people disappear. But now she must use her unique skill set to find a missing woman in this electrifying novel from the author of The Burial Society.

Eva Lombard is being followed. Or so she suspects. . . .

Eva and her husband, Peter, are in Hong Kong on a romantic getaway from London when Peter wakes up in their hotel room to an empty bed, his wife gone without a trace. His worst fears are confirmed: Eva wasn’t imagining things. Suddenly, he finds himself the number one suspect in his wife’s disappearance, trapped in a foreign country with no one to turn to. He calls his boss, Forrest “Holly” Holcomb, who enlists the help of Catherine, his ex-flame and the enigmatic operator behind the darknet witness-protection program known as the Burial Society.

As a favor to Holly, Catherine sends her team of highly trained Society members on a dangerous chase through Hong Kong to find Eva–while she takes care of pressing business at home. Not only is she tasked with a mission in Mexico City, protecting a family that knows too much from a vengeful pharmaceutical company, but an FBI agent tracking down the missing wife and child of a charismatic businessman is about to come dangerously close to exposing the Society’s secrets.

In these intertwining story lines that converge in unexpected ways, not everyone is who they appear to be–and not everyone who is lost wants to be found. (summary from Goodreads)