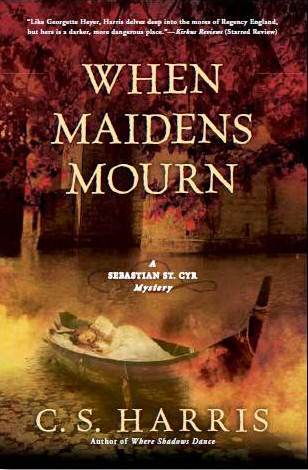 This series has really held up for me. It’s not easy to binge read a series as lengthy as this one but I am doing it and not even apologizing. I love this series and while some books might be slightly formulaic, it’s the evolution of Sebastian’s character that stands the test of time for me.

Regency England, August 1812. Sebastian’s plans to escape the heat of London for a honeymoon are shattered when the murdered body of Hero’s good friend, Gabrielle Tennyson, is discovered drifting in a battered boat at the site of a long-vanished castle known as Camlet Moat. A beautiful young antiquarian, Miss Tennyson had recently provoked an uproar with her controversial identification of the island as the location of Camelot. Missing and presumed also dead are Gabrielle’s two young cousins, nine-year-old George and three-year-old Alfred.

Still struggling to define the nature of their new marriage, Sebastian and Hero find themselves occasionally working at cross-purposes as their investigation leads from London’s medieval Inns of Court to its seedy back alleys, and from grand country homes to rural enclaves where ancient Celtic beliefs still hold sway. As he probes deeper, Sebastian also discovers dark secrets at the heart of the Tennyson family, and an enigmatic young French lieutenant with a dangerous, mysterious secret of his own.

Racing to unmask a ruthless killer and unravel the puzzle of the missing children, Sebastian and Hero soon find both their lives and their growing love for each other at risk as their investigation leads to Hero’s father, who is also Sebastian’s long-time nemesis… and to a tall, dark stranger who may hold the key to Sebastian’s own parentage. (summary from Goodreads)

This mystery was simply ok for me. It didn’t really stand out too much from the others besides all the references to Camelot and a famous poetic family. What really held my interest was the personal character development of Sebastian and Hero. I love watching how Sebastian is always being tested personally and the ways in which Hero has changed from the very first book until now. I loved how there were new tantalizing possibilities raised about Sebastian’s parentage and history for future books. Having read some of the later books in the series, I kind of know what’s coming but what I love about reading this series from beginning to end is seeing the who and the why evolve.

As with each and every Sebastian St Cyr mystery, I am always impressed with the author’s historic detail and knowledge. I don’t think I talk about that often enough in my reviews of the series, so instead of focusing on how much this book set into motion changes in our favorite characters, I am going to touch on how well written the history is.

As I said before, the mystery was just ok for me in this one, but the scope of historical research that Harris does for each and every book is unparalleled. She is undoubtably well versed in both English and French Regency history and the subtle nuances and details of the period, all the way down to the dialogue and slang, is solid. I am eating it all up and I can’t wait for more in the rest of the series.

I have jumped around in the series of course and there are certainly books that could be read as standalones (like this one) but do yourself a favor and read them all from the beginning. Each mystery is satisfying and while I might not have enjoyed the mystery as much in this one, the character development across the books and the historical research is impressive and worth it.