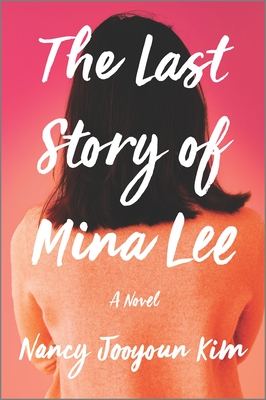 Right from the start, I really liked the sound of this novel. An unconventional mother daughter story just sounds refreshing and interesting to me.

I couldn’t fit this one in on my review schedule which made me so sad but I was able to do the next best thing and bring you guys a little sneak peak with an excerpt today.

After reading that excerpt I am even more excited for this one to release! It is out on Sept 1st so only a couple more days to go! I can’t wait to read this one and I hope you guys are as excited about this one as I am!

THE LAST STORY OF MINA LEE (on sale: September 1, 2020; Park Row Books; Hardcover; $27.99 US/ $34.99 CAN). opens when Margot Lee’s mother, Mina, doesn’t return her calls. It’s a mystery to twenty-six-year-old Margot, until she visits her childhood apartment in Koreatown, Los Angeles, and finds that her mother has suspiciously died. The discovery sends Margot digging through the past, unraveling the tenuous and invisible strings that held together her single mother’s life as a Korean War orphan and an undocumented immigrant, only to realize how little she truly knew about her mother.

Interwoven with Margot’s present-day search is Mina’s story of her first year in Los Angeles as she navigates the promises and perils of the American myth of reinvention. While she’s barely earning a living by stocking shelves at a Korean grocery store, the last thing Mina ever expects is to fall in love. But that love story sets in motion a series of events that have consequences for years to come, leading up to the truth of what happened the night of her death.

Margot’s final conversation with her mother had seemed so uneventful, so ordinary—another choppy bilingual plod. Half-understandable.

Business was slow again today. Even all the Korean businesses downtown are closing.

What did you eat for dinner?

Everyone is going to Target now, the big stores. It costs the same and it’s cleaner.

Margot imagined her brain like a fishing net with the loosest of weaves as she watched the Korean words swim through. She had tried to tighten the net before, but learning another language, especially her mother’s tongue, frustrated her. Why didn’t her mother learn to speak English?

But that last conversation was two weeks ago. And for the past few days, Margot had only one question on her mind: Why didn’t her mother pick up the phone?

Since Margot and Miguel had left Portland, the rain had been relentless and wild. Through the windshield wipers and fogged glass, they only caught glimpses of fast food and gas stations, motels and billboards, premium outlets and “family fun centers.” Margot’s hands were stiff from clenching the steering wheel. The rain had started an hour ago, right after they had made a pit stop in north Portland to see the famous 31-foot-tall Paul Bunyan sculpture with his cartoonish smile, red-and-white checkered shirt on his barrel chest, his hands resting on top of an upright axe.

Earlier that morning, Margot had stuffed a backpack and a duffel with a week’s worth of clothes, picked up Miguel from his apartment with two large suitcases and three houseplants, and merged onto the freeway away from Seattle, driving Miguel down for his big move to Los Angeles. They’d stop in Daly City to spend the night at Miguel’s family’s house, which would take about ten hours to get to. At the start of the drive, Miguel had been lively, singing along to “Don’t Stop Believing” and joking about all the men he would meet in LA. But now, almost four hours into the road trip, Miguel was silent with his forehead in his palm, taking deep breaths as if trying hard not to think about anything at all.

“I’m just thinking about my parents.”

“What about your parents?” Margot lowered her foot on the gas.

“About why you’re really moving down to LA?” The rain splashed down like a waterfall. Miguel had taken a job offer at an accounting firm in a location more conducive to his dreams of working in theatre. For the last two years, they had worked together at a nonprofit for people with disabilities. She was as an administrative assistant; he crunched numbers in finance. She would miss him, but she was happy for him, too. He would finally finish writing his play while honing his acting skills with classes at night. “The theatre classes? The plays that you write? The Grindr account?”

“Do you ever think about telling them?”

“Do you think they know?”

“Of course, they do. But…” He brushed his hand through his hair. “Sometimes, agreeing to the same lie is what makes a family family, Margot.”

“Ha. Then what do you call people who agree to the same truth?”

She laughed, having expected him to say friends. Gripping the wheel, she caught the sign for Salem.

“Do you need to use the bathroom?” she asked.

“Yeah, should be another hour or so.”

“I’m kinda hungry.” Rustling in his pack on the floor of the backseat, he found an apple, which he rubbed clean with the edge of his shirt. “Want a bite?”

His teeth crunched into the flesh, the scent cracking through the odor of wet floor mats and warm vents. Margot was struck by a memory of her mother’s serene face—the downcast eyes above the high cheekbones, the relaxed mouth—as she peeled an apple with a paring knife, conjuring a continuous ribbon of skin. The resulting spiral held the shape of its former life. As a child, Margot would delicately hold this peel like a small animal in the palm of her hand, this proof that her mother could be a kind of magician, an artist who told an origin story through scraps—this is the skin of a fruit, this is its smell, this is its color.

“I hope the weather clears up soon,” Miguel said, interrupting the memory. “It gets pretty narrow and windy for a while. There’s a scary point right at the top of California where the road is just zigzagging while you’re looking down cliffs. It’s like a test to see if you can stay on the road.”

As she refocused on the rain-slicked road, the blurred lights, the yellow and white lines like yarn unspooling, Margot thought about her mother who hated driving on the freeway, her mother who no longer answered the phone. Where was her mother?

“What about you?” Miguel asked. “Looking forward to seeing your mom? When did you see her last?”

Margot’s stomach dropped. “Last Christmas,” she said. “Actually, I’ve been trying to call her for the past few days to let her know, to let her know that we would be coming down.” Gripping the wheel, she sighed. “I didn’t really want to tell her because I wanted this to be a fun trip, but then I felt bad, so…”

“She hasn’t been answering the phone.”

“Hmm.” He shifted in his seat. “Maybe her phone battery died?”

“It’s a landline. Both landlines—at work and at home.”

“She never goes on vacation.” The windshield fogged, revealing smudges and streaks, past attempts to wipe it clean. She cranked up the air inside.

“Hasn’t she ever wanted to go somewhere?”

“Yosemite and the Grand Canyon. I don’t know why, but she’s always wanted to go there.”

“It’s some kind of Korean immigrant rite of passage. National Parks, reasons to wear hats and khaki, stuff like that. It’s like America America.”

“You’re probably right. I’ll call her again when we stop.”

A heaviness expanded inside her chest. She fidgeted with the radio dial but caught only static with an occasional glimpse of a commercial or radio announcer’s voice.

Her mother was fine. They would all be fine.

With Miguel in LA, she’d have more reasons to visit now.

The road lay before them like a peel of fruit. The windshield wipers hacked away the rivers that fell from the sky.

Born and raised in Los Angeles, Nancy Jooyoun Kim is a graduate of UCLA

and the MFA Creative Writing Program at the University of Washington, Seattle. Her work has appeared in the Los Angeles Review of Books, Guernica, The Rumpus, Electric Literature, Asian American Writers’ Workshop’s The Margins, The Offing, the blogs of Prairie Schooner and Kenyon Review, and elsewhere. Her essay, “Love (or Live Cargo),” was performed for NPR/PRI’s Selected Shorts in 2017 with stories by Viet Thanh Nguyen, Phil Klay, and Etgar Keret. THE LAST STORY OF MINA LEE is her first novel.

One thought on “Special Feature and Excerpt: The Last Story of Mina Lee by Nancy Jooyoun Kim”