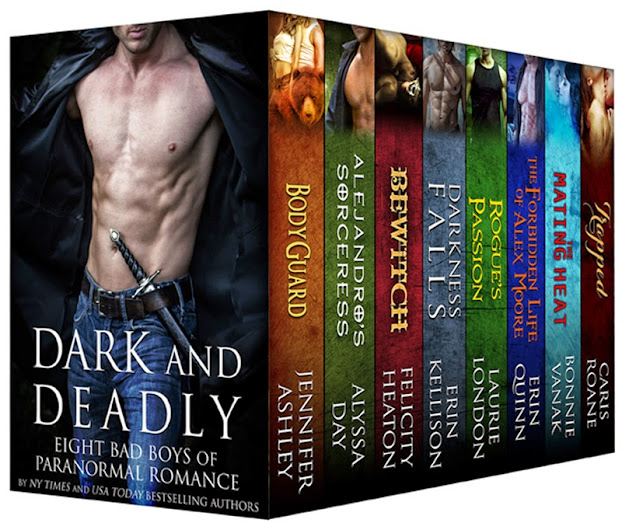 Dark and Deadly: Eight Bad Boys of Paranormal Romance Boxed Set is now available worldwide for a special introductory price of only $0.99!

Here’s more about this fantastic eight book boxed set, including an excerpt from one of the stories.

Eight hot paranormal romances by New York Times and USA Today bestselling authors. Alpha-male bad boys will fulfill your darkest, most deadliest desires in these stories about shifters, werewolves, vampires, magic, special powers and other realms. But only if you dare…

Elizabeth Chapman is saved from an armed attacker by a Kodiak bear who shifts into a tight-bodied, naked human male. Ronan takes Elizabeth to Shiftertown, becoming her 24/7 bodyguard. The mateless Ronan has adopted a houseful of orphaned Shifters–having grown up in foster care, Elizabeth is touched by his protectiveness. Ronan only wants to keep Elizabeth safe, but the sassy woman is triggering his long-buried need to mate.

He’s a warrior, hardened by years of protecting his town from vampire attack. She’s a garden witch who sees the world in shades of sunshine and delight. Opposites don’t only attract, they go supernova in this sizzling tale of magic and mayhem.

A vampire with a bloodstained past and a soul tainted with darkness, Payne is perfect in his self-control, never surrendering to his darkest desires. Now a beautiful witch in the shadowy fae underworld reawakens long denied hungers and tempts him with pleasure. When one incredible night of fulfilling their fantasies leads to more than just keeping a promise and saving a friend, will they be able to overcome the barriers that stand between them and forever?

Agent Malcolm Rook is hunting for people with the rarest of talents—the ability to master dreams. He finds the undeniably gifted Jordan Lane, but she’s wary of mysterious Rook and resists his pursuit as long as she can. Yet the dreamwaters they enter are too exhilarating to resist, and attraction soon ignites electric passions. Delving too deep stirs a nightmare, one they must defeat, or be forever lost to darkness.

Blaming himself for the death of a friend, Iron Guild warrior Asher Kane vows to bring those responsible to justice. After he’s hurt on a mission and nursed back to health by a beautiful yet mysterious woman, this dangerously sexy bad-boy finds himself falling for Olivia…even as he struggles to stay away. But stalking them on the streets of New Seattle is a cruel and vengeful evil—one that threatens to destroy them both…

THE FORBIDDEN LIFE OF ALEX MOORE by Erin Quinn

Alex’s mission: Kill the hellhounds that have invaded earth and return to his home in the Beyond. But from the start, things go horribly wrong. The hounds are cunning and a human female witnesses their attack—she intervenes and saves Alex’s life. Now he must keep the alluring Lilly alive while fighting his desire for her. When passion flares, Alex risks all to protect her and defend the forbidden life he craves.

THE MATING HEAT by Bonnie Vanak

Werewolf Kara Mitchell fled with her brother Aiden to Montana after their alpha father punished her for kissing sexy omega werewolf Ryder Carrington. Left scarred by her father’s cruelty, Kara believes no one can love her. After killing his alpha to save the pack, Ryder now rules, but needs a mate. His blood runs hot for Kara. Ryder will do anything to claim her, even risk an all-out pack war that could cost them everything…

Mastyr Vampire Zephyr, a one-man fighting force, struggles to save the life of a woman who despises his warrior ways. She’s been a thorn in his side, but he has one goal: to keep her safe. For Alesia, however, she just wishes he’d leave her alone since she can never approve of his profession. She broke up with him months ago and wants to start a new life. The trouble is, he’s still the one man who can curl her toes.

EXCERPT FROM THE MATING HEAT BY BONNIE VANAK

Someone switched on the stereo in the corner to a thumping dance tune. Couples began gyrating and swaying to the melody. Ryder stood and held out a hand. “Dance with me, Kara.”

She went into his arms.

Kara leaned into his embrace, resting her cheek on his broad shoulder. Contentment filled her for the first time in years. Murmurs rippled through the air. Glancing up, she saw everyone had stopped to look at them. Many were smiling and some of the older Lupines nodded in approval.

They wanted this match. She sensed it.

Ryder buried his face into the curve of her neck.

“I want you in my bed, now. Your scent is driving me mad,” he whispered. “I’ve dreamed of it, tried to forget it. Every night I spent dreaming of lavender and vanilla. Going outside and searching the fields, the garden, desperate to see your face one more time, hold you in my arms. And then I wake up, my arms empty, my dreams shattered. I’m afraid to open my eyes in case this is a dream.”

Halting, she framed his face with her hands. “I’m not a dream. I’m very real.”

Ryder’s nostrils flared. The warmth of her touch burned through his shirt. He kissed her hand, and then trailed his fingers down the softness of her unmarred right cheek, across to her slender neck where a pulse beat hard and fast beneath his thumb. He stroked the big vein.

“This is where I’ll bite you and put my mark on you.”

Kara trembled harder. “Will it hurt?”

“They say it stings, but then has an unimaginable pleasure.” He blew a hot breath against her skin. “It’s an intimacy only mated couples share, intoxicating both male and female into consummating their bond.”

Tunneling his fingers through the heavy fall of her ebony hair, he tugged her head backward, gazing down at her.

“I don’t believe there’s been a case of Lupines who didn’t consummate the bond. I imagine it would be quite unpleasant. But it’s not an experience I intend to have.”

He kissed her, relishing how sweet she tasted, and how she opened for him on a sigh. Kara’s lips were plump and ripe as cherries and the flavor bursting onto his tongue tangling with her rich, female scent shot straight through to his groin.

Ryder slid a hand up her back, holding her tight against him, never wanting to release her.

That awareness of connection surged again. He felt awake and free, and wanted to laugh with the joy of it. Two grim years spent without Kara, and with her in his arms once more, he felt alive.

Her lips were lush, plump and wet as he ravished her mouth. Ryder kept kissing her, feeling her light push away the darkness consuming him since her departure.

Sensuality was in their nature, the craving to touch and connect, but for a long time he’d only felt the touch of Alastair’s lash. The memory of Kara’s kiss had eased that sting.

Ryder surrendered to carnal bliss as he licked and tasted in a kiss meant not only to claim, but to awaken.

Breaking the kiss, he gazed down into her smoky eyes, aware of their ragged breaths and pounding hearts. Sex with Kara would not be fleeting pleasure.

And tonight, he intended to burn both of them. Ryder tugged her hand. “Come Kara,” he said softly. “Upstairs. It’s time.”

Grab the boxed set for just $0.99 to read this story and seven others…