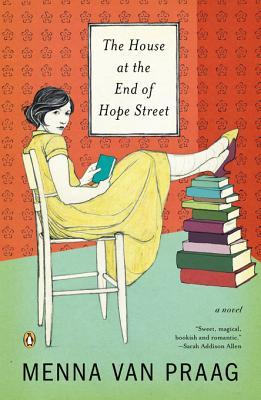 Alba’s life is falling apart. Everything that she has been working for has literally come to a grinding halt, she has lost all hope.

While working on her MPhil at Cambridge, she suddenly gets rejected and can no longer continue pursuing her passion–history.

While wandering the streets of Cambridge one night, she suddenly finds herself in front of a house that she has never seen before.

Mysteriously drawn to the house, Alba is met by the land lady, Peggy, who invites her into the house for some tea.

As soon as Alba enters the house, she notices the hundreds of photos of famous women in British history–Beatrix Potter, George Eliot, Daphne du Maurier to name a few.

All of these women stayed at the house at a time when things were most desperate in their lives only to reemerge 99 days later successful woman who leave their marks on history.

Peggy offers Alba this same chance, 99 days to change her life and let the house heal her. With few other options she accepts residency at 11 Hope Street.

She quickly discovers that she isn’t the only resident at Hope Street. There are two other women also staying there–a down on her luck actress, Greer, and a mysterious Portuguese beauty, Carmen.

The house is also full of non-living residents–a ghost haunts the kitchen waiting for Alba and her name is Stella, but Stella is only visible to Alba.

Alba soon grow quite close to Stella and Stella helps her realize the deepest desires of her heart. But will Alba have the courage to follow this new path the house has shown her?

I was really excited to read this book. It held tons of promise for literature lovers. The novel has a distinct element of magical realism but it isn’t the central point of this novel.

I loved meeting all the literary greats in this book as well as many other famous women in history. They weren’t the central focus of the novel though either…the book was about the four women of Hope Street (Peggy, Greer, Carmen, and Alba).

Reading the four stories had an interesting effect on the overall plot. On one hand, it was intriguing and each woman was very unique and I liked getting to know each one for different reasons. On the other hand, it bogged the plot down a little with all the changing perspectives.

Part of me would have liked to have seen the Hope Street plots split into a series, so one book for Greer, one book for Carmen, one book for Alba, and one book for Peggy rather than a single novel containing parts of four unique stories.

Each character had so much potential and intrigue that I really wanted to get to know them more and read their back stories instead of having it all crammed into one book.

I think of all the women, I liked Greer best. I thought her story was the most relevant to me based on her place in life. Here was a woman who was more or less past her prime in the film industry so the big question is, what will she do now? She’s sacrificed her basic desires for her dream and now suddenly here she is, left with nothing and a grey future.

Alba and Carmen were younger and to me still had time to make the most out of their lives. Peggy was coming to the end of her life and was trying to make up for lost time, where as Greer was sort of stuck somewhere in the middle.

The novel was predominantly about Alba and her journey to self discovery. Sadly I didn’t connect with her in the way I had hoped. As the novel went on she started to grate on me. She needed so much encouragement and she was so timid, I just couldn’t relate to her in any way. So I struggled with her as a character throughout the novel.

I did enjoy the feminist qualities about the novel. I am a huge fan of Women’s Studies and Women’s History. I loved that the author brought this unique flavor to the novel touching on issues of sexuality and female empowerment….WONDERFULLY executed!

I am so glad the publisher redesigned the cover. I am in LOVE with the new orange cover. The hardback cover with the tree on it was completely uninspiring to me. This new design really caught my eye and I thought captured the essence of the novel. Well done!

Over all I think this novel was a good read….I liked it, perhaps I didn’t LOVE it, but I enjoyed it all the same. The beginning of the story was whimsical and fun.

I loved the house with all it’s character and magical powers. Meeting the women in the photos also endeared the book to me. I now want to go back and read, Rebecca, Middlemarch, and A Room with a View since these novels were referenced heavily in the book.

Book: The House at the End of Hope Street by Menna van Praag

It takes great courage and determination, to keep looking for light in all the darkness of life

4 thoughts on “Review: The House at the End of Hope Street by Menna van Praag”