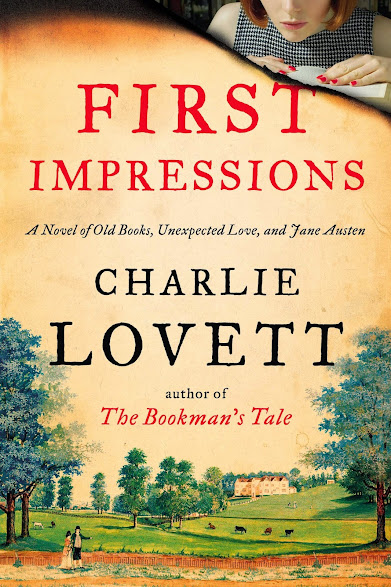 I’m very excited to share with you the beautiful cover of Charlie Lovett’s upcoming novel, FIRST IMPRESSIONS, which will be published by Viking this October. This charming book is sure to appeal to the same readers who loved his novel The Bookman’s Tale, and will be especially exciting for Jane Austen fans (maybe the title rings a Pride and Prejudice bell?).

Book lover and Austen enthusiast Sophie Collingwood has recently taken a job at an antiquarian bookshop in London when two different customers request a copy of the same obscure book: the second edition of Little Book of Allegories by Richard Mansfield. Their queries draw Sophie into a mystery that will cast doubt on the trueauthorship of Pride and Prejudice—and ultimately threaten Sophie’s life.

In a dual narrative that alternates between Sophie’s quest to uncover the truth—while choosing between two suitors—and a young Jane Austen’s touching friendship with the aging cleric Richard Mansfield, Lovett weaves a romantic, suspenseful, and utterly compelling novel about love in all its forms and the joys of a life lived in books.