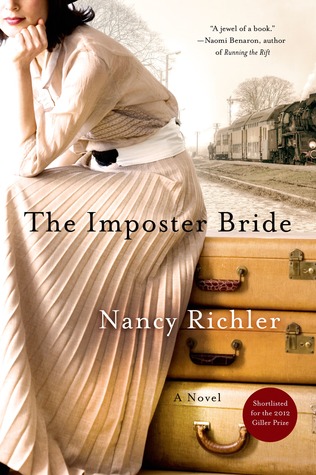 In post WWII Montreal, Lily Azerov arrives to meet her betrothed for the first time.

But this stranger harbors a secret. In Eastern Europe she stumbles upon a dead woman and assumes her identity.

After fleeing Eastern Europe for Palestine, as a new woman, she becomes engaged via mail order to a Canadian names Sol Kramer.

After arriving in Montreal, Sol refuses to marry her rather quickly after the meeting. Luckily for Lily, his brother Nathan steps in and marries her.

At the wedding, a couple of uninvited guests of the groom arrive. Ida has heard from her cousin, Sonya,  in Tel Aviv that a woman has been there pretending to be their cousin Lily.

Ida and Sonya have both determined that Lily isn’t their cousin at all but rather a woman who assumed an identity in order to escape the horrors of the Holocaust.

Soon Lily has a daughter, and all of a sudden she abandons her whole family–no one seems to understand why. Lily fears exposure from Ida and has no choice but to flee and hope for the best.

The book focuses largely on her daughter Ruth’s quest to find out who her mother is and what happened to her. All that Ruth has to go on is her mother’s journal and a large uncut diamond.

This novel was difficult for me to review. It started out so strong with a lot of promise. After the first few chapters I was easily convinced it would be a 4 star novel for me.

But then somewhere along the way it just ‘fell off’ for me. I wasn’t as engaged as I had been previously about half way through. I was a little lost in the narratives that were happening and I just felt like it moved too slowly.

I liked the idea of a woman assuming the identity of someone else during the war. The concept sounds intriguing and different. I was really looking forward to this novel with that concept in mind.

What I didn’t count on was the pace of the novel. I expected something with that much intrigue and mystery to be a bit more fast paced. Not that I expected it to be ‘action packed’ but I did expect it to move faster than it did.

I wasn’t a fan at all of how the book ended. Nothing was really explained and brought to a close. Ruth and her mother meet and even though Ruth has a lot of questions, her mother just basically says ‘sorry I don’t know why I did that but I just did’ and Ruth was seemingly ok with that.

I wanted more drama, more answers, more explaining and I just never felt like I got that in the conclusion of this novel.

I was surprised by how quickly this book went from a 4 star rating to a 2 star rating. It has such promise but the execution was lacking. The story and concept was different and unique…right at a precipice and it had great potential but it lacked development and execution.

I liked the idea of this novel more than the novel itself. It’s wasn’t bad per-say but it wasn’t off the charts amazing either. I would say average.