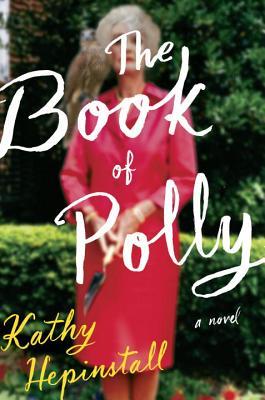 I have a soft spot for local writers and when I saw that this author lives in Portland, OR I had to at least do a special feature on her novel!

This is an unforgettable story about the grip of love in a truly quirky family, told with a particular blend of sass and warmth. Polly is one of those can’t-forget-her female characters with whom readers are destined to fall in love, and her daughter Willow’s coming of age story is one to which both mothers and their daughters will relate.

Publishers Weekly says, “Polly is a hybrid of Granny from The Beverly Hillbillies and Shirley MacLaine’s Ouiser Boudreaux in Steel Magnolias… [THE BOOK OF POLLY] is full of laughter and warmth” and Kirkus Reviews said, “classic elements of Southern comedy—evil twins, people dropping dead, a faith healer, a river-rafting trip—surround a lovable pair of central characters.”

The character Polly is based, in part, on Kathy Hepinstall’s own wicked-tounged mother and Hepinstall has incorporated her mother’s sayings, and some family anecdotes in coloring the narrative of THE BOOK OF POLLY. Although the story itself is fictional, Polly’s stories and persona are on every page.

Willow Havens is ten years old and obsessed with the fear that her mother will die. Her mother, Polly, is a cantankerous, take-no-prisoners Southern woman who lives to shoot varmints, drink margaritas, and antagonize the neighbors and she sticks out like a sore thumb among the young modern mothers of their small conventional Texas town. She was in her late fifties when Willow was born, so Willow knows she’s here by accident, a late-life afterthought. Willow’s father died before she was born, her much older brother and sister are long grown and gone and failing elsewhere. It’s just her and bigger-than-life Polly.

Willow is desperately hungry for clues to the family life that preceded her, and especially Polly’s life pre-Willow. Why did she leave her hometown of Bethel, Louisiana, fifty years ago and vow never to return? Who is Garland Jones, her long-ago suitor who possibly killed a man? And will Polly be able to outrun the Bear, the illness that finally puts her on a collision course with her past?

Kathy Hepinstall grew up in Spring, Texas, near the Louisiana border. Her most recent book is The Book of Polly. Polly is based, in part, on Kathy’s own mother, who has as wicked a tongue as her fictional counterpart. Kathy now lives in Portland, Oregon.

Be sure to check out this thrilling Q and A with the author as well!

One thought on “Special Feature: THE BOOK OF POLLY by Kathy Hepinstall”