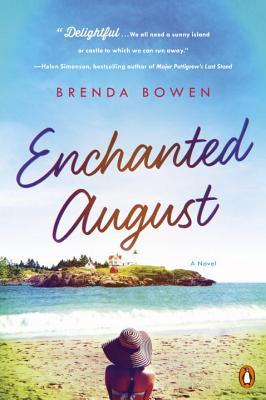 Last summer I had the pleasure of reading and reviewing ENCHANTED AUGUST by Brenda Bowen and now it’s coming to paperback this summer!

This fun summer beach read, is out in paperback on July 5th from Penguin Books with a gorgeous new cover.

A Maine Literary Awards finalist, ENCHANTED AUGUST transports readers to a tiny island in Maine, telling the story of four mismatched people who learn that sometimes—if you’re lucky—a change of scenery can lead you right back to where you belong. Romantic, optimistic, and as refreshing as a summer cocktail, the novel itself is a perfect escape.

Mary Kay Andrews agrees—she recently recommended ENCHANTED AUGUST as a summer pick, saying “Do yourself a favor and escape from the withering heat and humidity of a Southern summer by steering a course for Little Lost Island.”

Below is a great Q & A with Bowen sure to get you excited about summer reading!

It’s an unusually rainy summer in Park Slope, Brooklyn, when Lottie Wilkinson and Rose Arbuthnot spot a battered index card on their children’s preschool bulletin board:

Old pretty cottage to rent on a small Maine island.

Neither of them can afford to take a month away from their spouses and kids, but one look at Hopewell Cottage online and they are smitten. To share expenses, they find two unlikely companions to join them: Caroline Dester, the damaged, beautiful darling of the independent movie scene, and Beverly Fisher, a retiree recovering from a heartbreaking loss. Though they get off to a rocky start, soon the four begin to relax into island life. And, as the sea breeze works its magic, they rediscover the best versions of themselves, and find, to their surprise, that they can indeed be happy, and with the people they least expect.

Brenda Bowen is a literary agent. She lives in New York, and spends as much of her summer as she can on an island much like Little Lost Island in Maine. ENCHANTED AUGUST is her adult debut.

A Conversation with Brenda Bowen,

Q:  How did the idea for ENCHANTED AUGUST develop?

In 1991, I saw the movie Enchanted April, which transported me to Italy, a place I love, and made me feel as if life could be very magical indeed, if only for a short while. It wasn’t till the credits rolled on the movie that I realized it had been based on a book, THE ENCHANTED APRIL, by Elizabeth von Arnim. I read the book, fell in love with it; saw the movie again (and again), and loved it more each time. And every time I saw the film or read the story, I felt: “This could be happening now.”

For many years as an editor and publisher and agent, I’ve given authors and artists ideas for books. Usually the ideas are very vague, and the author then takes the idea and makes it into a bona fide story. I was thinking about giving the idea of an updated ENCHANTED APRIL to an author, so I started roughing out a story to see if it could work. Then I kept going. And gong. And now…it’s a book under my own name, which is thrilling indeed.

Q: Your book is based on a 90-year-old novel, which was made into an Oscar-nominated film. Did you feel apprehensive taking on such a well-loved work? What are the differences between your novel and the original ENCHANTED APRIL? Why did you move the story to Maine, and to August?

I didn’t actually feel apprehensive, though in retrospect I should have. THE ENCHANTED APRIL is a bit of a well-kept secret: those who know it tend to adore it; but many do not know it at all. The story seemed to be crying out to be replayed by women (and men) who move in the modern world.

When I started the book, it was called APRIL, ENCHANTED, and it took four bedraggled New Yorkers to an island based on St. Lucia over spring break. I loved the idea of setting the new book in the Caribbean because the colors and fragrances are so strong, as they are in the von Arnim original. But I didn’t really know the place, in my bones, so the manuscript didn’t work at all. Plus, I couldn’t imagine a month-long spring break. I talked to my agent, the wonderful Faith Hamlin, about my dilemma, and proposed to her that I take the characters to Maine, where I’ve spent summers for many years. She said, “Yes, get them up to Maine and leave them there a month, and then send me the manuscript.” So I did.

Q: You seem to have a great affection for Maine. Have you spent a lot of time there? Do you have your own “Hopewell Cottage?”

I do love Maine. I went to Colby College, in Waterville, where I learned to tough it out in wintery, inland Maine. I never even visited the coast of Maine till my last week at Colby, and then, like everyone else, I fell in love with it. A friend of mine has a family cottage on one of Maine’s thousands of islands, and I spent many summers with her there in my twenties and thirties. Then I had a family, and we started renting a cottage of our own. I have my own Hopewell, the place we go year after year, though, like the characters in ENCHANTED AUGUST, it’s only mine to rent. But that’s enough. “My” Hopewell doesn’t have two turrets, but in every other respect it’s as charming, peaceful, evocative, and breathtaking as the cottage in ENCHANTED AUGUST.

Q: Besides THE ENCHANTED APRIL, what were your literary (or non-literary) influences while writing this book?

I’m such a magpie: I steal everything. So I’m influenced by the words and actions of people around me. I just take whatever they say and put it into my stories. I love many of the 19th-century writers: Jane Austen, Charlotte Bronte, E. M. Forster, Henry James, J. M. Barrie.  I’m not crazy about Dickens and I can’t read Trollope (I’ve tried!). I love Philip Roth’s books: they are so different from what I like to write but they are just what I like to read. I am very influenced by movies – screwball comedies in particular. Mistaken identities, mixed signals, tiny lies that turn into big trouble – those are the stories I most adore. I go to the theater as much as I can. I like to hear the sound of stage dialogue: like real life, but heightened. When I get stuck, I read Mary Wesley.

Q: Could you talk about your writing process? How did you get in the “Little Lost” mindset?

I spent three years writing the first third of ENCHANTED AUGUST, and then – once I had a publisher and a deadline — six months writing the second two thirds. I do a lot of my writing at the Hungarian Pastry Shop in New York City, where there is no wi-fi and there are no electrical outlets. You can’t go online, and you can only use your computer for as long as it keeps a charge. The computer I wrote the book on only kept a two-hour charge, so I’d write for two hours and then stop, wherever I was.

When I had to step things up to meet the deadline, I’d do two writing sessions of 40 minutes each in the very early morning before I went to work at 8:30AM. Then I’d write for a half-day on Friday and as much time as I could on Saturday and Sunday. I also spent most of August of last year finishing the novel on my own Little Lost Island.

I generally put on headphones to write. I play birdsong or sounds of the forest or the ocean as my writing soundtrack. When I write a rainy scene, I play a rainstorm on the headphones. I’m always shocked I’m not drenched to the skin when the scene is done.

Q: You have spent many years in the publishing world. What’s it like being an author, rather than an agent or publisher?

This could be a really REALLY long answer, or a short one, so I’ll go with the short one: I love being an author. As Neil Gaiman says, “I get to make up stories all day and someone pays me.” That is a great thing. I am grateful for every reader, every bookstore owner, every librarian who touches my book. I know what it takes to get a book to market and I am deeply appreciative of everyone who has a hand in it.

Q: What would your perfect summer day look like? If it includes reading, what would you read?

Start on a Maine island. Get up early. Make coffee very quietly so as not to wake up the cottage. Heat up a sticky bun from the farmer’s market; vow to eat only half. Sit on the porch with coffee and sticky bun. Break vow. Watch the water. Pick up a book from the cottage bookshelves and dip in. Go inside and realize three hours have passed.

Put on some clothes, many of which are the same as clothes worn yesterday. Walk to the other side of the island in the sun. Watch the kids play tennis with the olds. Knit a little. Eat something for lunch. Read on the porch: I am very susceptible to the latest summer novel, or else I’m rereading a favorite classic like The Great Gatsby or Vilette (great book; bad title). Or my darling Mary Wesley. Notice there are no more sticky buns; bake a blueberry cake for tomorrow.

Maybe take the boat into town to get groceries. Go to a friend’s cottage to contribute to a communal feast of a dinner, usually involving fresh fish on the grill and always involving vegetables from the garden. Also involving pie. Eat. Talk. Drink. Walk home under the stars with no flashlight, if it’s not too dark. Go to bed early. Get up with the first bird and do it all over again.

Q: Will you write another book about Little Lost Island?

A lot of readers have asked me that question! Someday I’d like to write a book about Max and Kitty, and their on-again/off-again romance. I love that they’re from different worlds but they’ve grown up together, and the possibility for conflict (and attraction) there. But for now I’m at work on another, very different novel. More on that to come….

Q: If you could have your own Hopewell Cottage who would your ideal houseguests be? They can be living or deceased.

NOTE: Shakespeare would get a whole summer of his own.

Jane Austen, though I fear the journey would tire her

In the drinkers’ corner:

So that we’d have some artists to go with the scribblers:

And some photographers to go with the artists:

On the grill:
Bobby Flay

That’s it for one summer.

Praise for the book

“A charming, thoroughly engrossing novel that’s the next best thing to being there.” —People

“Charming and witty. . . with a setting that could not be more appealing—from the woodland fairy houses and twin turrets in the island cottage to the rocky beaches and all-day lobster bakes. ENCHANTED AUGUST reminds us that sometimes it just takes a change of scenery to reveal that love is right in front of us.” —BookPage

“A frothy and fun retelling using a fictional Maine island as the backdrop…It’s hard to argue that a small cottage on a large island would not cure most of life’s challenges – if anywhere could, it would be this fictional Little Lost Island.”—Portland Press Herald

One thought on “Special Feature: ENCHANTED AUGUST by Brenda Bowen”