Her first marriage was an epic fail.

Lady Avalon Warwyk never did love her husband. Arrogant, selfish, and cruel, it’s a blessing when she’s widowed and left to raise her son all by herself. Finally, Avalon can live freely and do the work she loves: helping fallen women become businesswomen. She’s lived these past ten years with no desire to remarry―that is, until Mr. Devan Farris comes to town.

Can he convince her to take another chance at happily ever after?

Devan Farris―charming vicar, reputed rake, and the brother of Avalon’s son’s guardian―is reluctantly sent to town to keep tabs on Avalon and her son. Devan wishes he didn’t have to meddle in her affairs; he’s not one to trod on a woman’s independent nature and keen sense of convictions. But she’ll have nothing to do with vicar with a wild reputation―even though he’s never given his heart and body to another. If only he could find a way to show Avalon who he really is on the inside―a good, true soul looking for its other half. But how can prove that he wants to love and care for her…until death do they part?

Praise for the Cavensham Heiresses Series

Janna MacGregor was born and raised in the bootheel of Missouri. She credits her darling mom for introducing her to the happily-ever-after world of romance novels. Janna writes stories where compelling and powerful heroines meet and fall in love with their equally matched heroes. She is the mother of triplets and lives in Kansas City with her very own dashing rogue, and two smug, but not surprisingly, perfect pugs.

An Excerpt from WILD, WILD RAKE by Janna MacGregor

Inch by inch, he moved nearer. In response, she did the same with her heart pounding in approval. With his breath fanning her lips, she forced her gaze to his. “Devan, I want…”

The words came from a place inside so deep, so forlorn, that she hardly recognized herself.

Without answering the undeniable plea in her voice, he closed the distance between them. Like a touch of a feather, he brushed his lips against hers. Before she could grow accustomed to the indescribable heat of his mouth against hers, he drew away and looked at her as if memorizing every feature of her face.

This time she did moan in protest. After so many years to be denied the feel of lips against hers was a sin against humanity. She leaned forward shamelessly to capture his mouth against hers again. Awkwardly, her nose bumped against chin. “I’m sorry.”

“Don’t be. I want to kiss you as much as you want to kiss me.” He moved closer, and his mouth descended to claim hers deliberately with tender care.

This time his lips pressed against hers, and she could do nothing except push her body close to his as if seeking him—ready to claim him. He tasted of brandy and mint, and she wanted to drown in it. Instinctively, her arms curled around his neck holding tightly while she pressed her chest against his. Immediately, her breasts grew heavy, aching for him as her nipples tightened into painful points as if pouting for him to give them attention.

When his arms encircled her waist, she sighed against his mouth when he pulled her tighter against him. The buttons of his waistcoat were a delicious torment, and she wiggled against them seeking relief.

He nipped her lower lip playfully, and she tried to return the gesture. When she opened her mouth, he slanted his mouth over hers and his tongue slipped inside. It was heaven. For the life of her she couldn’t remember ever sharing anything so personal and intimate with another person. His tongue slowly danced with hers and she groaned in appreciation as hers matched each intricate movement.

He drew back slightly, and by his rapid breath he was as affected as her. “Avalon,” he whispered.

The sound of her name made everything inside her soften into a molten heat. With infinite care, she kissed him again. At first, she teased him by sweeping her lips across his. When he made to deepen the kiss, she pulled away. He allowed her to play before capturing her lips with his. The caress turned sweet and tender, then like a wildfire, it became a force to be reckoned quickly with.

Eventually, he was the first to pull away, and she protested with a whimper. His breathing had grown ragged, and he rested his brow against hers.

“We must stop.” He pressed his lips against her forehead.

Her own breath raced as if trying to keep up with her frantic heartbeat. “Why? Am I doing it wrong?” Even to her own ears, she sounded like a petulant child having a treat taken away. “You could teach me. With your experience, it shouldn’t take long.”

He pulled away from her.

She’d been denied such pleasure all her life. For once in her life, he made her feel and believe she deserved it. She never coveted a physical closeness with another like she had with him tonight.

“It’s not a matter of experience, Avalon. These aren’t ordinary kisses, are they?” He waited for her to answer.

Instead she pressed her face against his neck cloth and inhaled deeply. The smell of starch and orange bergamot along with the stiffness of his cravat combined into a maelstrom of sensual excess. She wanted to bury herself in it.

“Are you afraid to do more because I’m your benefactress? Please don’t be.” God, she wanted more kisses and more of him. It was paradise in his arms, and his kisses tasted of ambrosia straight from the gods. But a startling truth grabbed ahold and woke her from the sensual dream they’d created. If he told his brother, Larkton, what she’d said or done, Thane would be ripped from her and Warwyk within a week. After one last deep inhale, she forced herself to back away from him.

The sharpness of his gaze told her he missed nothing when he studied a person. He was much too intelligent not to know how much she wanted him.

“I got carried away,” Avalon offered. She pressed a hand against her pounding heart with the unintended effect of her arm pressing against her hardened nipples. How would she survive the cold of the night and the deluge of new sensations that was her new companion?

“We both did,” he answered. The tenderness in his voice immediately made her wary.

One kiss from Devan Farris, and she’d turned into a love-sick fool. No wonder he was so popular with ladies. She straightened her shoulders as she struggled with how to address what would happen next.

“This whole night should stay a secret. If word got out, I’m concerned…your brother would take Thane.” Memories of Richard’s threats that he’d take her son resurfaced. The fears and horrors of his rants grew. She gulped a breath of air desperate to flush away the haunting reminder.

He silenced her with a finger against her lips. It only took one look at the affection shining from his eyes, and she felt as if she was falling endlessly head first down the tallest cliff at Dover.

“Avalon, what happened between us is no one’s business but ours. Larkton will never hear of it from me. If you choose to tell him, that’s your prerogative.”

She swallowed the fear that had lodged her throat. “I’d hoped we could keep this private.”

“Of course.” He dipped his head until his gaze met hers. “But this does change things between us.”

“How so? Aren’t I just another in the long line of women…” She let the words trail to nothing as she immediately regretted the tartness of her words. “That was unbecoming of me.”

She nodded as if mesmerized by him.

Which she was—completely and irrefutably entranced by him tonight.

“Do you know why I call you Lady Warlock?”

Without her gaze leaving his, she shook her head slowly.

She blinked slowly. Was he just saying it out of kindness or did she dare hope there was a kernel of truth in his words. Her heart thudded so loudly against her chest Devan had to hear it.

He took his greatcoat and spread it around them. “Now, I think we best figure out a way to stay warm.”

Saturday, February 29
Review at Reading is My Remedy

Tuesday, March 3
Excerpt at What Is That Book About

Tuesday, March 10
Review at The Romance Dish
Excerpt at I’m All About Books

Friday, March 13
Review at A Chick Who Reads

Friday, March 20
Review at Coffee and Ink
Review at Pencils and Pages

During the Blog Tour, we are giving away a paperback copy of Wild, Wild Rake! To enter, please use the Gleam form below.

– Giveaway ends at 11:59 pm EST on March 20th. You must be 18 or older to enter.
– Paperback giveaway is open to US only.
– Only one entry per household.
– All giveaway entrants agree to be honest and not cheat the systems; any suspicion of fraud will be decided upon by blog/site owner and the sponsor, and entrants may be disqualified at our discretion.
– The winner has 48 hours to claim prize or a new winner is chosen. 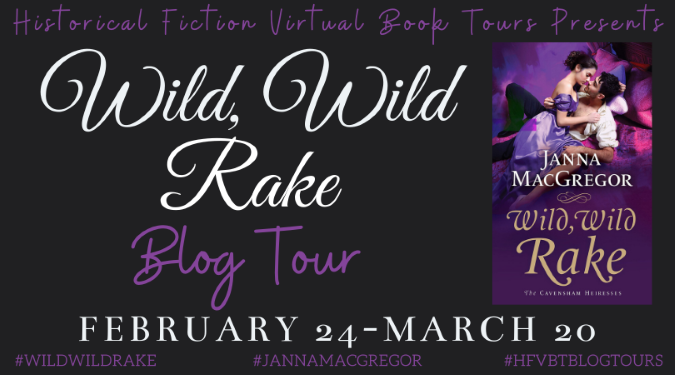 One thought on “Special Feature and Excerpt: Wild, Wild Rake by Janna MacGregor”