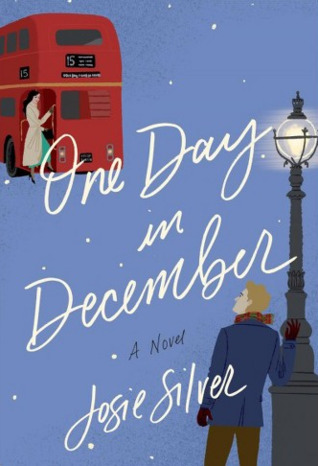 One of my absolute favorite holiday movie is Love Actually. I watch it every year and it never gets old no matter how cheesy and unrealistic is it.

My favorite couple David (Hugh Grant) and Natalie (Martine McCutcheon) followed closely by Juliet (Kira Knightly) and Mark (Andrew Lincoln). So when I saw this book so heavily compared to Love Actually and the Juliet/Mark couple, I was eager to read it.

It was my December Book of the Month pick and truth be told I almost passed on all the books for December on BOTM but, I saw so many excellent reviews about this one and decided at the last minute…..why not?

Laurie is pretty sure love at first sight doesn’t exist anywhere but the movies. But then, through a misted-up bus window one snowy December day, she sees a man who she knows instantly is the one. Their eyes meet, there’s a moment of pure magic…and then her bus drives away.

Certain they’re fated to find each other again, Laurie spends a year scanning every bus stop and cafe in London for him. But she doesn’t find him, not when it matters anyway. Instead they “reunite” at a Christmas party, when her best friend Sarah giddily introduces her new boyfriend to Laurie. It’s Jack, the man from the bus. It would be.

What follows for Laurie, Sarah and Jack is ten years of friendship, heartbreak, missed opportunities, roads not taken, and destinies reconsidered. One Day in December is a joyous, heartwarming and immensely moving love story to escape into and a reminder that fate takes inexplicable turns along the route to happiness (summary from Goodreads).

So yes this book was similar to Love Actually……or more accurately, the book mentioned Love Actually without actually saying that it was Love Actually. So if you are a fan of the movie, you will see quite a bit of influence in this book, but I wouldn’t say that it is entirely like the film.

This book was a hard one to review. On one hand I read it super fast and enjoyed it but on the other hand there was nothing about it that made me love it if that makes sense.

It started out promising with Laurie seeing Jack on the bus and then wondering when and if she would ever find the guy, only to have him turn up on the arm of her best friend. The first third of the book was actually pretty comical and entertaining, but then things got a little more serious.

I never really warmed up to Jack and only ever felt that his feelings for Laurie were nothing more than curious. He seemed really into Sarah, her friend, and when he recognized Laurie he didn’t say anything and instead just kept on dating her friend Sarah. Then as he started to realize that he had feelings for Laurie, rather than break it off he just kept right on dating Sarah. I thought the author did a good job explaining the reasons behind it and in truth, it was very real and plausible, however this is fiction and a part of me wanted a more honest love interest/hero for Laurie.

For me Laurie was too basic. There was nothing about her character that stood out to me. She had a lot of mixed feelings about Jack and Sarah and eventually her romance with Oscar but never really recognized them until it was too late and she never seemed to find her own voice. She just seemed to stay the same for me and just meandered through the story and romances.

The book ended too abruptly for me as well. There was all this build up and complicated life saga that stretched over ten years and then all of a sudden it wrapped up in like two chapters. That was frustrating for me because I felt like a lot of the middle melodrama could have been condensed and then finished off with a stronger ending.

Ok so it sounds a lot like I didn’t enjoy this book doesn’t it? On the contrary, I did like it. While there were things that for me were problematic, the overall story was enjoyable to read. It was one of my favorite Christmas reads this year and I thought that even though the characters were flawed and not very like-able, I thought that they were very real and honest. Not every holiday book or film needs to be all cheeky and perfect with a flawless hero and heroine who fall desperately in love. In real life, love is messy and all roads aren’t always easy when you are looking for your match. I thought this book did a great job of capturing this perspective and I think that’s why a lot of people absolutely loved this book.

When the heart is involved, people make mistakes and make choices that they normally wouldn’t and we see that very evident in Jack, Sarah, and Laurie. This book while not always easy to read, was very honest and at times funny mixed with some sadness, but in the end we get everything we ever hoped for—-a Christmas-y happily ever after.

If you loved this book and are looking for something similar to read then be sure to check out this list of other titles from the blog Books Like This One. My TBR grew from this list so pop by and check it out!

Book:  One Day in December by Josie Silver

One thought on “Review: One Day in December by Josie Silver”