Bittersweet Seraphim has been released from Hell.

Satan Jack invites you to come…and indulge yourself in his journey to save the angel he loves. After running Hell for over a thousand years one foul-mouthed Seraph has changed his end game.

Even if it means destroying the universe, Jack refuses to give up on Emma. He didn’t know what love was until Emma’s skin pressed against his, the addiction to any of his other vices paling in comparison. Jack has never been a fearful man, but he gets it now. Fear comes when you have something to lose. Or someone. 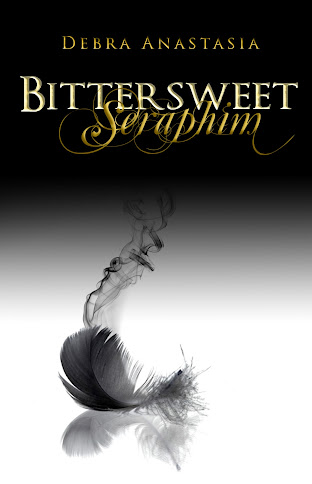 Suffering is worst when you’re doing it alone. But Emma’s taking Hell like an angel—even though her languishing began with having her seraph wings torn from her back. Now her worst enemy lords his body and his evil desires over her while she tries desperately to remember the words to her favorite prayer.

As Devil, Jack used to have Hell and its women humming like well-oiled machines. Too bad he’s nowhere near the place now. Stuck on Earth as a human, he must work with a ragtag team of exiled minions and half-breeds to save the angel who’s become all that matters.

Rescuing a seraph is the plan, but breaking into Hell means letting evil things out. Once they collide, minions and angels converge in the battle of the ages: good versus evil. But which side is which? Will Jack destroy the world as he fights to save Emma, his true and timeless love, from a damnation he designed?

An action-packed sequel to Crushed Seraphim, this tale reveals—time and again—what happens when the heart’s deepest desires break free. With a story both sizzling and sensual, emotional and enigmatic, Debra Anastasia invites readers to join a battle with nothing less than love on the line.

Get some Jack links

Thank you for letting Bittersweet Seraphim fly here today! Go to Debra Anastasia’s BLOG for a list of tour stops, more chances to win, and a buddy prize with crystal bracelets!

Winners will be announced 11/29/12 and notified by email.

Winners have 5 days to claim their prize, if not a new winner will be selected.