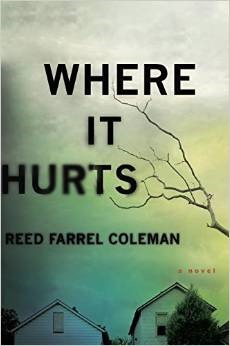 What struck me as interesting about this novel was that it was set on the ‘wrong side of the tracks’ section of Long Island.

Most people think of the Hampton’s when they think of Long Island and of course all the wealth and privileged that that neighborhood entails.

This book is set on the other side of Long Island. This immediately struck me as a gritty novel that promised almost ‘film noir’ like characters…..maybe ones that were hard boiled and morally questionable so I was drawn to this book for it promised something ‘different’.

When we first meet Gus Murphy, though he is a retired cop, he is living in a run down hotel driving the courtesy van. His son’s death has taken it’s toll on Murphy which lead to the end of his marriage. Basically life is pretty terrible for him.

An ex con, Tommy Delcamino, approaches Murphy about an investigation. Tommy’s son’s body was found four months earlier and the local police don’t seem too invested in solving the case.

Murphy encourages Tommy to work with the police but Tommy explains that Murphy was the only cop he ever trusted. Though Murphy initially turns it down, he has second thoughts and decides to go forward with the investigation.

It becomes quickly apparent that there more to this case than meets the eye! This case is part of a deeply rooted cover up involving a bunch of people on all sides of the law that stand to lose something if Murphy solves it.

I have never read anything by Farrel Coleman before so this is my first experience with his writing and his style. This is not a ‘feel good story’ nor is it a ‘tidy’ mystery. It’s dark, gritty, and has complicated characters that you will most likely not enjoy…….however, Murphy’s character evolves from a broken man in the beginning to a man who is forced to face his demons and become the man he once was.

Murphy’s character’s evolution throughout the novel was well written and inspiring. As a reader, I was really rooting for him and I was happy with the resolution of the novel. You can’t help but enjoy the main character…..some of the secondary characters not so much but the main guy is relate-able!

I went into this book with the idea that it was going to be edgy, gritty, and different…..and I was not disappointed in the least. This book read super fast and every page advanced the novel and mystery. This book reminded me a little of a James Patterson novel when it came to pace. I read this book in a matter of days with a large chunk being in one sitting.

The last 30% of the novel was especially fast paced and kept me on the edge of my seat. I really enjoy a well written crime novel and this one did not disappoint. The only thing that I struggled a bit with was that this novel was almost ‘too busy’ with characters. There were a lot of different characters to keep track of and I found myself distracted some times by the amount of characters.

That said, this was still a worth while read and if you are into crime novels or thrillers this one does not disappoint!

Book: Where It Hurts (Gus Murphy #1) by Reed Farrel Coleman