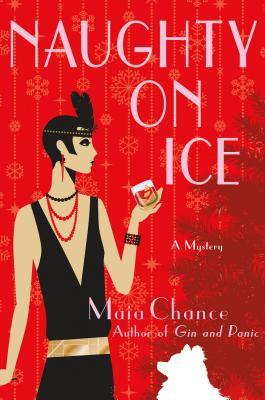 This excerpt kicks off a blog tour full of reviews and giveaways so don’t miss you chance to get this one for your holiday reads! I posted a link at the end go the excerpt for you to see what else is happening on this tour!

The Discreet Retrieval Agency is doing a brisk holiday business of retrieving lost parcels, grandmas, and stolen wreaths. But with their main squeezes Ralph and Jimmy once more on the back burner, both Lola and Berta pine for a holiday out of New York City. So when they receive a mysterious Christmas card requesting that they retrieve an antique ring at a family gathering in Maple Hill, Vermont, they jump at the chance. Sure, the card is signed Anonymous and it’s vaguely threatening, but it’s Vermont.

In Maple Hill, several estranged members of the wealthy Goddard family gather. And no sooner do Lola and Berta recover the ring–from Great-Aunt Cressida Goddard’s arthritic finger–than Mrs. Goddard goes toes-up, poisoned by her Negroni cocktail on ice. When the police arrive, Lola and Berta are caught-red-handed with the ring, and it becomes clear that they were in fact hired not for their cracker-jack retrieving abilities, but to be scapegoats for murder.
With no choice but to unmask the killer or be thrown in the slammer, Lola and Berta’s investigations lead them deep into the secrets of Maple Hill. In a breathless pursuit along a snowy ridge, with a lovelorn Norwegian ski instructor and country bumpkin hooch smugglers hot on their heels, Lola and Berta must find out once and for all who’s nice…and who’s naughty (summary from Goodreads).

The circumstances, I do realize, were ghastly. A chunk was missing from the molasses layer cake on the kitchen table. A corpse lay, probably still warmish, out on the living room carpet. And I was aware that, having been caught in the act of removing a ruby ring from an elderly lady’s finger, my detecting partner, Berta Lundgren, and I looked as guilty as masked bandits in Tiffany’s.

The policeman, who had announced himself as Sergeant Peletier, stood over the kitchen table, wearing an Oho, what have we here? expression. “You’re the uninvited guests, I reckon,” he said. “Mrs. Lundgren and Mrs. Woodby?”

“We were invited,” Berta said coldly.

“That’s not what I was told,” Peletier said. He surveyed drunken Aunt Daphne, the ring, and the cake. “Having a bit of dessert with a side of jewel thieving, I see. Mighty funny thing to do right after your hostess has expired.”

“I beg your pardon?” Peletier said.

I swallowed cake. “Allow me to explain,” I repeated.

Thiswasn’t the plan. The plan had been to retrieve the ring, pop it in the breadbox, slink out of the house, and skip town on the next train out.

“Yes,” Peletier said. “Please explain. Mrs. Goddard lies dead in the other room, and you’re here in the kitchen shimmying a ring off Mrs. Lyle’s finger?”

At the mention of her name, Aunt Daphne raised her champagne glass. “Cheers,” she crowed.

“I will explain,” Berta butted in. She was a rosy, gray-bunned lady of sixty-odd years who spoke with a faint Swedish accent and resembled a garden gnome. “What you see before you is a tried-and-true method for removing stuck rings from fingers—fingers, you understand, that have . . . expanded.”

We all regarded Aunt Daphne’s fingers, which, short and plump and swollen, resembled a litter of Dachshund puppies. The too-small ring had been maneuvered to just below the knuckle with Berta’s trick of looping embroidery thread under the ring, winding the thread tightly around the finger, and then unwinding the thread from the bottom. With each loop that was unwound, the ring edged up another millimeter. The downside was that it looked rather painful. However, Aunt Daphne, drinking champagne and shoveling cake with her free hand, had yet to complain. There really are no better painkillers than cake and booze.

“A pound of butter wouldn’t get this thing off me,” Aunt Daphne said. “Believe me, I’ve tried it! This darned thing’s been stuck on my finger since the summer of 1919.”

“When you stole it,” I prompted.

“Stole it?” Aunt Daphne snickered, and with her free hand she lifted the glass of champagne to her lips and polished it off. “I never said that!”

“Yes, you did.” Panic zinged through me. I turned to look up at Peletier. “She stole it. She told us she did. In the summer of 1919. We have merely been, um, asked to remove it.”

“Sounds like thievery to me. And now, coincidentally, Mrs. Goddard is dead.”

My cheeks were growing hot. “As I said, Aunt Daphne stole the ring, and we are merely attempting to restore it to its rightful— Hold it. What are you suggesting? ‘Coincidentally’? Mrs. Goddard died of a heart attack, didn’t she? That’s what it appeared to—”

“I smelled it on her breath. Cyanide. Likely in the cocktail she’d been drinking at the time of her death.”

“Are you certain?” I said. “I happened to notice she was drinking a Negroni. Those are made with Campari, you know, which itself is as bitter as poison—”

Phooey. It had been Berta’s idea to carry on with the ring-retrieval job even after Judith Goddard had kicked the bucket about an hour earlier. Having nothing else to do while waiting for the authorities to turn up, we had conferred in the butler’s pantry amid the family silver. I had whispered that it was unseemly to filch a ring under the circumstances. Berta had whispered, “Oh no, we did not come all the way up here to the snowy wilds of Vermont for nothing, we are finishing the job.” I had conceded. Our train tickets had been costly.

Now I gave Berta a bug-eyed I told you so look.

She ignored it and busied herself with completing the ring removal.

“Oh, all right,” I said to Peletier with a sigh. “The jig is up. We’re private detectives—”

Berta flicked Peletier a frosty look. “I did not expect to be asked to provide my credentials this evening. Ah! There. The ring is—” She wiggled it from Aunt Daphne’s fingertip. “—off.”

“You’re an angel of mercy,” Aunt Daphne said to Berta. “Thank you. My! Just look at the divot it left behind.” She massaged her finger, and then helped herself to more champagne.

“Buying that’s against the law, you know,” Peletier said, pointing to the champagne bottle.

“Oh, to Hell with your Eighteenth Amendment,” Aunt Daphne said. “It’s for the dogs. And politicians and church ladies.”

“Would you mind if I placed the ring in the breadbox?” Berta asked Aunt Daphne.

“Not at all. I never want to see that thing again.”

Berta went to put the ring in the metal breadbox on the counter—plink—and then sat back down.

Peletier pulled out one of the ladder-back chairs, sat, and extracted a notebook and pencil from inside his coat. He was small and wiry, with a flushed face, beady eyes, and tufting gray hair and eyebrows. He called to mind a disgruntled North Pole elf. His embroidered badge read Maple Hill, VT Police and featured a deer and a pine tree.

“Start at the beginning,” he said.

In a tumbling back-and-forth, Berta and I explained to Peletier that we were private detectives with our own small agency in New York City.  How, last week, we’d received an invitation from an anonymous sender asking us to dinner at Goddard Farm, requesting that we retrieve a stolen ring, place it in the breadbox, and to subsequently expect payment in the mail. That we’d only arrived in Maple Hill earlier that afternoon, having taken the night train, and that we had rooms at the Old Mill Inn only for that evening. How Anonymous had not revealed him- or herself to us upon our arrival at Goddard Farm (really a mansion on a ridge above the village).

How we’d been gobsmacked when Judith Goddard went toes-up only fifteen minutes after our arrival.

“I understand that this was a family gathering to celebrate Mrs. Goddard’s recent engagement,” Peletier said. “How did you explain your appearance at a family affair?”

“Well, at first it was a bit awkward,” I said. Only Judith Goddard, her brother Roy, her aunt Daphne, Judith’s three adult children, her brand-new fiancé, and two servant women had been present in the house. “Youknow how it i—”

“We had no choice but to fabricate an explanation,” Berta interrupted. She was serenely sawing the molasses cake.

“They said that I invited them,” Aunt Daphne said. “That we’d met at a ladies’ poetry luncheon at the country club in Cleveland. I can’t remember much any more, of course, and poetry knocks me out cold, so I didn’t realize that they were lying—”

“Mrs. Woodby and I are innocent of any wrongdoing,” Berta said. “We were merely doing our job. Surely, Sergeant Peletier, you are able to understand that.”

Peletier snorted and stood. “Come down to the station tomorrow morning, and if you can show me this anonymous invitation of yours, maybe I’ll let you off the hook. Until then, don’t even think about leaving town. Good evening.” He left the kitchen, Aunt Daphne drifting after him with the champagne bottle.

Berta and I looked at each other across the collapsing cake. “Would it be absolutely unconscionable to leave right now?” I whispered.

“There has been a death in the family, Mrs. Woodby, and we are strangers. We should leave them to their grief.”

“Maybe there is something we could do to help—”

“There is nothing worse than having to speak with strangers when one’s heart is breaking.”

Honestly, I hadn’t gotten the impression that Judith Goddard’s demise was cracking anyone’s heart in two. Not even the heart of her fiancé-to-be. “They aren’t an especially happy family,” I said, “but I suppose none are. Happy families are a myth.”

“Nonsense. You must simply know one when you see it. They sometimes come in unusual forms. Now, come along. After we show the invitation to Sergeant Peletier in the morning, our hands will be washed clean of this terrible affair.”

I felt like an absolute gink as we sneaked to the entry hall to fetch our coats, hats, scarves, and gloves. We didn’t encounter any of the family or the servants, although voices rose and fell in distant rooms. We stepped out the front door into the night. Our breath billowed in the icy air. Berta bent her head into the wind and toddled toward our rented pickup truck, an REO Speedwagon with a boxy cab and wooden rails around the bed. She winched herself up into the passenger seat.

I followed, mincing like Comet or Cupid through the crunchy snow in my high heels. I took the hand crank from the cab floor, resuscitated the engine, climbed behind the wheel, flicked on the headlamps, and we were off.

“Oh, it is so very cold,” Berta said with a shiver. “As cold as I remember Sweden being when I was a girl, but I am no longer young.” I inched the truck down a steep, snow-packed road. Bristling black forest encroached from beyond the headlamp beams. I was accustomed to the glitter and hum of Manhattan. Nighttime in the countryside was giving me the jumps.

“I have a bad feeling about this,” I said.

“If you slip, steer into the slide. That is the only way to avoid a tailspin.”

“We will be on our way home tomorrow.” How I wished I could believe it.