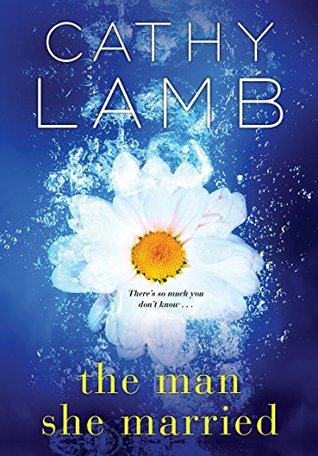 I always love meeting new to me authors in roundabout ways. Earlier this year I happened to be invited to book blogger week over at Tall Poppy Writers and found an outstanding community of authors who are dedicated to interacting with their audiences.

I have read and reviewed a number of authors from this group, but at the time I didn’t know they were part of this amazing community…..in fact I only just discovered the group a few weeks ago as I mentioned, and I had been reading a number of Poppy Writers for years!

Anyway, so I participated in their book blogger week met a number of new to me authors, one of which was Cathy Lamb, who also happens to live in the Portland, OR area which is about 45 min north of where I live. Small world!

She asked if I would be interested in reading her latest book, The Man She Married, and I was happy to do so. I didn’t really know much about the book or the author, but I was at least willing to support a fellow Oregonian by reading the book…..but was I in store for something that was not only interesting, but also different that I hadn’t been expecting.

When Natalie Shelton thinks back to how things were before the car accident, she remembers a great marriage. She and her husband, Zack, seem as strong and dependable together as the houses he builds. They live in Portland, Oregon, and Natalie is co-owner of a successful accounting firm. They’re happy, she’s almost sure of it.

Yet as Natalie lies trapped in a coma, unable to communicate though aware of everything around her, she realizes that her husband is hiding something. Zack has always been reticent about his past, which she attributed to an unhappy childhood. Now the strange calls he’s receiving, the apologies when he thinks she can’t hear him, and her fragmented memories from the morning of the accident suggest a deeper secret.

When she finally awakens, Natalie is determined to find out the truth. Sorting through clues as her brain heals, she realizes she has a rare opportunity—to reexamine the life she’s made and the man she’s made it with. But as answers come to light, she faces surprising, heartrending decisions, as well as a danger that could upend her world once again, as Zack’s past finally catches up with them (summary from Goodreads).

I don’t normally read a whole lot of women fiction or contempo lit, as my general review genre is historical fiction, however there are times when I pick up a book that is more contemporary. Which is the case with this book. Though when I skimmed the summary, it almost sounded like it was going to be a thriller or mystery.  However, this is truly more of a women’s fiction novel. At least for me it was. I know a lot of people, including Book Bub have classified this book as a psychological thriller, but for me it had a little too much humor to be considered that. For me, it wasn’t a disappointment to read a women’s fiction novel rather than a thriller, but I would say that the summary definitely suggests thriller so if you are expecting a thriller, some readers (though as I said, many consider this a psychological thriller) might be a little disappointed.

As I said, I wasn’t the least bit disappointed reading this one. I loved that it was set in Portland. There are so few novels set in Portland that when I find one that is, I always feel so fortunate!

I also loved that even though this book was an easy read for me, it still packed a lot of emotion into the narrative. It was fast moving and had a lot of comical moments, but there were also enough serious and moving moments that would satisfy readers who were looking for something a little more emotional.

This novel does a great job at telling the story of Natalie in her coma. While most of the book is about her recovery, the coma part for me was the most interesting. I haven’t read any books that tell a story from the POV of the person in the coma. So I thought it was interesting and while the recovery is the meat of the story so to speak, the come part stood out for me.

The characters were well developed, Natalie was interesting and relatable (coma and all) and her dad was really a unique and fun character to get to know. Zack was a little underwhelming for me. He wasn’t a bad character by any means, but he just seemed a little blah for me as a reader for some reason. A little one dimensional perhaps? It’s hard for me to really identify what it is about him that didn’t work for me, but there were just other characters that I liked better.

One thing that I noticed about the prose of the book was that it was unique. I was struggling to put a name to it and then I read another reviewer that described it perfectly—-irreverent. Yes yes yes, such a great word to describe her signature style!  It’s a very quirky, but yet recognizable prose. I don’t know that it’s for everyone, but for me it worked. Lamb’s humor and style rang through in this book.

For me this was a solid book. I have’t read anything else by Lamb before, but she has written a lot of other books that sound excellent. I love that I found this author in a roundabout way and now I have a bunch of new books to add to my TBR list!

Book: The Man She Married by Cathy Lamb

One thought on “Review: The Man She Married by Cathy Lamb”