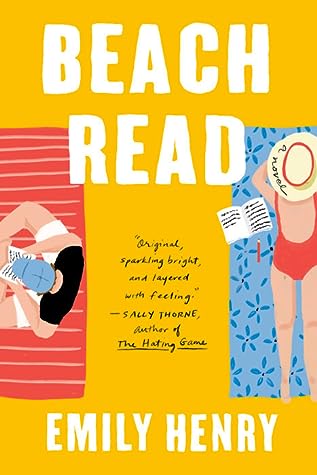 Before this book was everywhere, it was in my inbox. five months ago no one had been buzzing about this book when the pitch email came in, but it sounded cute and my spring calendar was open so I decided to give this one a go.

I picked it up one sunny afternoon in April and two days later at 6 am I was done reading it.

A romance writer who no longer believes in love and a literary writer stuck in a rut engage in a summer-long challenge that may just upend everything they believe about happily ever afters.

Augustus Everett is an acclaimed author of literary fiction. January Andrews writes bestselling romance. When she pens a happily ever after, he kills off his entire cast.

In fact, the only thing they have in common is that for the next three months, they’re living in neighboring beach houses, broke, and bogged down with writer’s block.

Until, one hazy evening, one thing leads to another and they strike a deal designed to force them out of their creative ruts: Augustus will spend the summer writing something happy, and January will pen the next Great American Novel. She’ll take him on field trips worthy of any rom-com montage, and he’ll take her to interview surviving members of a backwoods death cult (obviously). Everyone will finish a book and no one will fall in love. Really. (summary from Goodreads)

This book is incredible. If you were on the fence about it because of the hype, don’t even worry because it was absolutely worth the hype! It’s not often that a romance book like this packed such a heavy hitting punch but this book totally does it. The second I started reading, I was hooked and couldn’t put it down, but it was a book that while I was devouring it, I was also feeling so many things at a core level.

I adored Gus, I mean, my god he was sexy, sweet, and even if he came with emotional baggage, I was swooning for more Gus! I like my heroes complicated with issues (I know I’m weird like that!) and Gus was this complex, multilayered beef cake that I wanted to know more about every time he was there! As for January, even if she was romantic in the extreme and emotional, I found that I very much wanted to be friends with her even if I am not the emotional romantic that she is. All the shit she was going through with her family and her personal life was so real and raw, I couldn’t help but be drawn into her life and feel all her emotions.

I was incredibly caught up in this book and the romance between Gus and January. I thought it had spark, chemistry, and feeling. This book was easily a favorite for me. There was just so much cuteness, romance, and real life shit that I just devoured it. This was easily a top read for me this year and deserves all the 5 star ratings it can get. If you are worried that this might be ‘just another romance’ it is absolutely not. This romance has so much to enjoy, especially if you love books! Pick it up this is going to be a huge book for the spring/summer crowd!