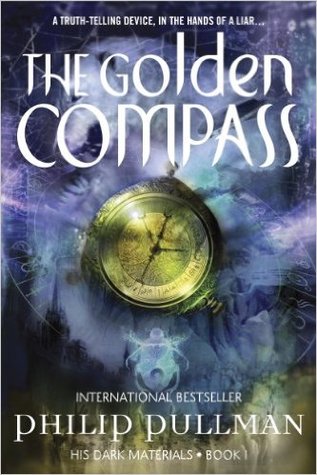 Lyra quickly becomes suspicious of Mrs Coulter and flees her London residence and is saved by the gypsies. There have been gypsy children disappearing for months, the rumor is they are in the north where dangerous and mysterious experiments are being performed on them…..and the gypsies intend to get their children back…..at any cost. Lyra joins them for their journey north and discovers that the experiments are far more dangerous and gruesome than anyone every imagined.

I have seem the movie which wasn’t awful, but I feel like it kind of ruined the book for me in some ways and normally that doesn’t happen for me……typically the book is so much better and engages me. In this case the movie mostly followed the book, there were some things that were out of order but more or less it was very similar. I had hoped that the book would fill in some lingering questions for me that the movie didn’t answer…..which in some ways it did but not as extensively as I had hoped.

While I think the book was better, I would say that it wasn’t ‘much’ better than the movie. I would say they were about the same. I was hoping for more suspense, new details, and more explanation of the characters and the events happening……but I felt like I got a surface overview of everything. I will probably read the other books in the series as I am curious where this is going, however I don’t know that I will move them up my TBR list any time soon.

Maybe it’s because the book and movie were so similar but I didn’t feel that whole ‘what happens next’ intrigue pulling me in to keep reading…..there wasn’t any suspense for me unfortunately but that could be different in the other books which will be ‘uncharted territory’ for me.

On another note….I can’t believe this book is for children! Now, I don’t believe in book banning or censorship, however I do think that there is an age where some themes are more appropriate than others. I think this book would probably be for older teens (14-18) rather than 11-18 as it is marketed. I think the religious themes and challenges to convention/tradition are wonderful for the 11-18 age group and I think with guidance from parents this would be a great book to encourage discussion about religion etc…..what I was hesitant about was the violence of some of the scenes. I thought some of the descriptions….the missing heads for example….. of the missing heads etc were a little graphic and ‘scary’ for children 11-18….I would say 14-18 would be a little better for some of the violence and the graphic nature of part of the book. Overall though, adults and children a like would enjoy this book.

The other thing that bothered me a little is was the language. For a young girl growing up with a lord has her guardian and living in the most exclusive Oxford colleges…..I expected Lyra to speak better but instead the way she spoke was almost more ‘working class’. Yes I know she hung around with a lot of servants and such but it bothered me that her linguistics didn’t match her ‘class’….minor though it may be, this bothered me for a number of reasons but mostly I thought what are we trying to teach these young readers? A lot of children are reading this book and looking up to Lyra and in my opinion it would be nice to see Lyra’s speech be equal to that admiration.

Overall this was a decent read…..I think I would have liked it better if I hadn’t seen the movie first (again, a rarity for me) but it satisfied a need that I was craving…..more cold winter-ish books.  It also inspired me to pick up books that I loved in my childhood such as The Lion, The Witch, and The Wardrobe and A Wrinkle in Time. I am curious to see where this story goes and the potential for the alternative universe…..what would that world look like? That is the big reason that I will pick up the other books in the series….to see what that world might look like.

Book: The Golden Compass (His Dark Materials #1) by Philip Pullman

4 thoughts on “Review: The Golden Compass (His Dark Materials #1) by Philip Pullman”