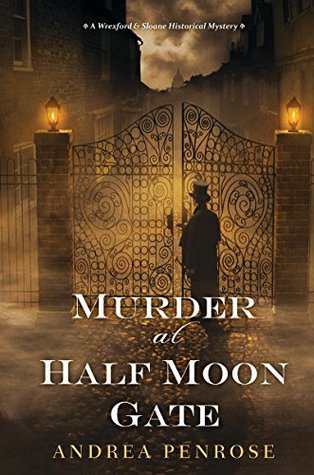 Last year I had the pleasure of reviewing the first book in a new series, Murder on Black Swan Lane, which was an exciting first book. I was anxious to read the next book and was thrilled to finally see it on Netgalley!

In the first book, I loved getting to know the protagonist, Lord Wrexford and Mrs Slone. While each had something that I liked independently, the thing I loved most about them was the chemistry. This book would no doubt capitalize on that chemistry.

When Lord Wrexford discovers the body of a gifted inventor in a dark London alley, he promptly alerts the watchman and lets the authorities handle the matter. But Wrexford soon finds himself drawn into the murder investigation when the inventor’s widow begs for his assistance, claiming the crime was not a random robbery.

It seems her husband’s designs for a revolutionary steam-powered engine went missing the night of his death. The plans could be worth a fortune . . . and very dangerous in the wrong hands.

Joining Wrexford in his investigation is Charlotte Sloane, who uses the pseudonym A. J. Quill to publish her scathing political cartoons. Her extensive network of informants is critical for her work, but she doesn’t mind tapping that same web of spies to track down an elusive killer. Each suspect—from ambitious assistants to rich investors, and even the inventor’s widow—is entwined in a maze of secrets and lies that leads Wrexford and Sloane down London’s most perilous stews and darkest alleyways.

With danger lurking at every turn, the potent combination of Wrexford’s analytical mind and Sloane’s exacting intuition begins to unravel the twisted motivations behind the inventor’s death. But they are up against a cunning and deadly foe—a killer ready to strike again before they can recover the inventor’s priceless designs (summary from Goodreads).

As I mentioned in my review of the first book, the plot doesn’t exactly sound terribly original. In fact based on the plot summary on each book, I felt like I had read a number of mysteries like this before. So why did I love this book and the series so much? Character, character, character.

I love Lord Wrexford. His sarcasm and pragmatic view of the world strikes a chord with me and I can’t help but love him. He is intelligent, brooding, and has a armor that no one dare break through. I feel like in many ways him and I are kindred spirits which is what makes me simply love his character so much. I would read this book just because of him. He isn’t this squeaky clean, bored aristocrat. He’s got a checkered past and puts on this arrogant pomp in order to protect his heart and I simply can’t say enough great things about him.

Charlotte Slone is the counterpart to Lord Wrexford. She’s had to struggle her whole life and now she is finally in a place to move on from her previous life and start to regain some of her former life. She is taking care of two orphans, Raven and Hawk, and trying to offer them a civilized and better life than what they know on the streets. She is honorable, sassy, courageous, but yet stubborn and proud to a fault.

Putting her together with Wrexford is a recipe for chemistry and spark. If it wasn’t clear in the first book, than it’s undeniable in this book, that Wrexford and Charlotte have feelings for one another. Their budding romance was one of my favorite things about this novel. I loved watching each character discover and admit that what they felt was more than just admiration. However, I think that could have been stretched into one more book. I almost felt like the ending between the two was rushed so that it would fit in the narrative by the end. I think it would have almost worked better to have them each discover how they felt and then in the next book have the romance be more about declaration. I think they needed more time to fully develop the sexual tension and romance. Don’t get me wrong, I love their romantic plot line, but I think it might have teased readers a little longer and built more suspense and tension for them.

This mystery was a tangled mess….in a good way. I thought there were enough red herrings to propel the story and keep readers guessing. I also liked how Wrexford continued to return to the scientific method to solve the case. Sometimes the obvious, simplest, and neatest solution is the answer—and then sometimes it’s more complicated than that. I loved trying to sort out and piece everything together and just found that I couldn’t do it until the final piece of the puzzle was revealed.

I read this story very fast and loved so many aspects of it. I can’t say enough good things about this series. I am eager to read the next installment. Penrose’s writing is superb and her ability to write complex characters that readers can still admire and relate to is perfection. I love each character in their own way and the romance is exciting not to mention the mystery itself. A win on a number of levels!

Book: Murder at Half Moon Gate (A Wrexford and Sloane Mystery #2) by Andrea Penrose

One thought on “Review: Murder at Half Moon Gate (A Wrexford & Sloane Mystery #2) by Andrea Penrose”