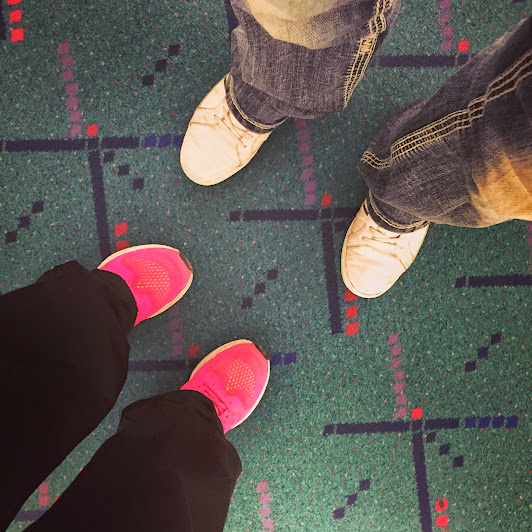 Virgin Air breaks the bad news and tells us that they have us flying stand by from SF to LAX. We were like UMMMMMM WTF we had everything confirmed!! They told us that everyone who bought tickets were assured a place on the flight…..so then why the F are we flying standby?! My wonderful husband calmly reminded me that things always seem to work out…..I on the other hand don’t always share his optimism.

We decide that we will try and not stress over it and head through security…. no issues (thankfully). While we are waiting to get on the plane we start to notice that Virgin Air seems to be like the hip hop airline. It is the only terminal blasting top 40 hits in the waiting area at 6 am. The area is full of young ‘soulful’ passengers and staff…..so we are literally wondering how we managed to book a seat on Soul Plane.

So as we get loaded, the interior lights of the plane are actually ‘moon lights’ or ‘black lights’…..Sam and I were literally dying. The safety video they showed was even a rap video…..it was awesome! So basically we road Soul Plane for the first leg of our trip and we were left to wonder why we were the oldest people on the flight.

When we arrived in SF, we found out that no we didn’t have a ‘for sure’ seat on the flight after all and we might have to wait for the next flight. Sam…..the ever calming presence…..was so good about asking the Soul Plane staff about our stand by status and stressing the importance of us making our connecting flight in LAX. I love when he starts to get a little stressed about things because his freak outs are epic compared to mine.

Fortunately we did get a seat on the plane and we were set to arrive in LAX with plenty of time to board the plane for Amsterdam. Everything seems like it’s going to work out…..but then they drop the bomb on us. While we are taxiing the runway, my husband looks at me and is like so are we going to drive there or what? We have been taxiing for literally 15 minutes, randomly all over the runway.

Evidently they are doing construction at LAX and they had to ground all planes for about 45 mins. So here we are thinking that we have plenty of time between LAX and Amsterdam plane changes to you know, grab lunch or something. It’s becoming rapidly apparent that we are never going to make it to LAX in time if we are going to be grounded in SF. Thankfully, we were only about an hour late leaving SF for LAX. When we arrive in LAX we then have to find the international terminal…..easier said than done.

We literally ask 4 different people and they all point in the same direction…..which ends up being the wrong direction. We end up on the far end of the domestic airport and have to run….literally run…..with our heavy ass jackets on outside (it’s 80 degrees and blazing sun) to the international terminal with our bags because not only are we an hour late arriving but now we have been wandering around lost for about 25 minutes.

So we make it to the international terminal and check in and the agent is like wait are you just checking in now?!?! The flight is already boarding! So we run….literally RUN to security and by this point we are both sweating profusely and the customs agents are like why are your backs hot? Sam and I are like oh God please don’t stop to search us we can’t wait another minute longer. Fortunately they accept our reason and don’t delay us further.

We run the terminal and see 3 giant lines all waiting to board the plane to Amsterdam. So Sam thinks he has time to grab us food (we haven’t eaten since 4:30 am and it’s now 1:30 pm). Well as he is waiting in line at the food place the lines start moving….and fast. I text him and I’m like we are boarding.

He’s like go to the end of the line we have time. I’m like no….see I am at the end of the line and we are waiting on you, I am the last person. At that moment they are like “last call for flight 235 to Amsterdam”! Sam leaves his food and runs to meet me in line.

So we are now starving and of course we are sitting next to ‘that guy’ on the plane. A large American man who talked the entire time and drank large amounts of alcohol during the flight. Lucky for me Sam took the middle seat.

The flight after this was more or less uneventful. The food on KLM Airlines was actually pretty good! The staff were super friendly and they were constantly bringing refreshments and snacks through. They had a large range of movie options, I didn’t feel like I was on a 10 hour flight at all. They were great and I will fly with them again gladly! If you are thinking about flying international, consider booking with KLM. The food, drinks (even alcohol) were all free of charge.

Our hotel sent a driver to retrieve us from the Prague airport and was there right on time. He took us safely to the hotel room and we only had to pay 690 CZK (about $27) for the car which was comparable to other shuttle services. If you are traveling abroad I would suggest contacting your hotel and see if they do airport pick up.

Our hotel room and staff were fantastic. We stayed at the Design Hotel Neruda which is in Mala Strana or Lesser Town. The room was a little on the small side but it didn’t matter to us. It had enough amenities (private shower, clean, king size bed etc) and they had a full service breakfast included.

The staff was always helpful (especially the night girl who got me hot water for my tea and brought it to my room each night) and I can’t say enough good things about their facility and service not to mention the location…..the location was to die for.

We were literally like 500 meters from Prague Castle. The Charles Bridge was a short walk as were a number of different tourist sights and shops. The location, price and service were unbeatable. Outstanding and affordable, I highly recommend the hotel (about $100 USD for a small room).

After getting settled in our room, we headed over to the Red Lion restaurant for a real meal, which was also wonderful. I had the steak and mashed potatoes and Sam had the chicken breast and potato dumplings. No complaints…..a 5 star meal that was also affordable (about $45 USD total for both of us).

Once we had dinner we knew it was time to settle in and try to sleep since we had an excursion planned for early the next morning (8:30 am). It was 4:00 pm local time and though that sounds early we had been up basically 24 hours. We literally crashed once our heads hit the pillow…..and then proceeded to wake up every 2-3 hours for the rest of the night.

I have never had jet lag like that…..I can’t believe I only slept 2-3 hours at a time and then was up for another 2-3 hours that night and for the remaining 3 nights after. I don’t know what was up with that but I literally felt like a zombie on the third day.

We quickly discovered that we weren’t going to sleep as easily as we had the other times we have traveled to Europe. Sleep deprivation will no doubt catch up to us at some point…..but not today.