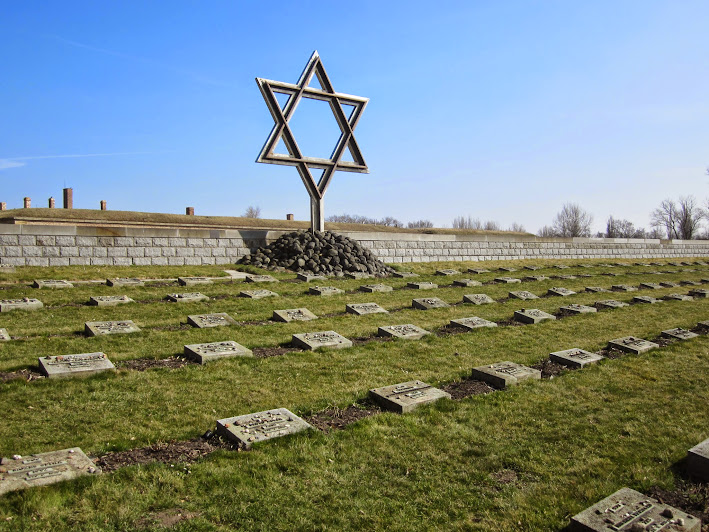 Hands down visiting Terezin concentration camp was the coolest thing we did while we were there. If we are going to the Czech Republic this is a must do! It was probably one of the most impactful experiences I’ve had in my life.

Sam and I had the morning free before we got picked up by our tour company at 12:30. So like any good tourists we were up with the sun (more or less) and headed out to look at the Castle.

So even though we knew our hotel was ‘500 meters’ from the castle, we still weren’t exactly sure how to get there……well let’s just say…..we are f-ing stupid. So We walk out of our hotel and head up the street.

We look to the right and we are like hummmm looks like a bunch of stairs, we don’t want to take the stairs to the castle so let’s walk uphill for about a half mile instead. So that’s exactly what we do.

It’s like 8:00 am and there really aren’t people out yet, and the sun was out so this was actually not entirely a bad idea……until we realized that the ‘stairs’ to the castle weren’t actually to the castle but instead stairs to some place that wasn’t the castle, so that was good…..but the castle was actually truly 500 meters away from our hotel we just missed it some how. Don’t ask me how but we are literally f-ing idiots.

The uphill walk wasn’t all bad though because we were able to see some stunning views of the city and Strahov Monastery. So we finally make it up to the castle, and low and behold there is like no one there. The tourists aren’t out in droves…..hell the castle doesn’t open until 9:00 am so we basically had the place to ourselves for a precious 15 minutes.

We were able to photograph the stunning St Vitus Cathedral, we were even able to go inside (free of charge) to see just the interior, past the interior you had to pay though. So for a whole 15 minutes we had basic peace and quite.

Then as we were leaving…..they hit…..the Asians arrived. Now if you have followed my travels before, Asian tourists give me major anxiety. They are literally everywhere and in large groups. Large groups of people in general practically send me into panic mode, so when there are large groups of people who are constantly bumping into me and don’t speak the language…..I literally can’t handle it.

But you will see as the days go by, my anxiety was not limited to Asians, but other groups of people who don’t speak the language and insist on traveling in huddled masses.

But luckily we had seen most of the outside of the church before a ton of tour groups showed up. I will obviously be posting more pics of St Vitus Cathedral on our “Castle Day” but I have included a few pics here for you to enjoy in the mean time.

So once we really that the tourists were now out in full force, we thought it would maybe be time for a short coffee break. So where else does one go when at the castle for a good cup of coffee……well Starbucks of course! Yes I traveled thousands of miles to have a Starbucks coffee. But how could I resist when the view from the rooftop cafe was to die for?!

So after that we wandered back down toward our hotel and stopped at a few shops along the way. One of the stores we stopped at was a marionette shop. At that point we decided we needed to take home a real marionette doll…..no matter how creepy and weird it looked. We made it a point to return to the shop later in the week to select our doll.

After leaving the marionette shop we made it back to our room with about 30 mins to spare before our tour company came to get us. The trip to Terezin was about $48 per person and worth every penny. It was only a half day tour (1 pm-5 pm) but that was actually prefect for us. We had the morning free and got back early enough that we could still go eat and walk around the city.

After our driver picked us up, we had a few minutes to look around the square. The whole time that Sam and I had been walking around the city the day before we kept noticing all these Asians with ‘selfie sticks’ and immediately Sam was like WE NEED ONE! So we looked at a few different stores and had no such luck. Well near our tour meet up point there was an Apple store……and low and behold, they had a selfie stick for about $20 USD. SOLD! We bought one with Bluetooth compatibility. We are officially tourists now.

This time our tour group contained 8 people which was perfect since we could take a small bus and not have to talk to anyone and rest assured that we weren’t going to be carted off and sold on the black market. There were also two Jews in our group, from Florida–a father and son doing a ‘grand tour’ of Europe. The dad knew pretty much everything when it came to Jewish history which was awesome, he added a lot of background to the tour…..the son on the other hand drove us crazy…..more on that later.

Terezin is about 30 mins outside Prague to the north west. It began as a fortress town in the late 18th century, and remained such until the early 20th century when it was used as a political prison during WWI.

One of the most famous political prisoners held at Terezin was Gavrilo Princip, a Serbian college student who assassinated Archduke Franz Ferdinand of Austria triggering the start of WWI.During WWII after the Nazi’s invaded and occupied Czechoslovakia, on June 10, 1940, the Nazi’s took control of Terezín and set up a prison in the “Small Fortress”. The first inmates arrived June 14. By the end of the war, the small fortress had processed more than 32,000 prisoners, of whom 5,000 were female.

Though Terezin was not an extermination camp, it was a work camp and it also remained a political prison. But it’s important to remember that more than 33,000 people died in the camp before it was liberated by the allied forces.

For those that are curious, here are some stats about the camp:

Approximately 144,000 Jews were sent to Theresienstadt (Terezin). Most inmates were Czech Jews, but 40,000 were from Germany, 15,000 from Austria, 5,000 from the Netherlands, and 300 from Luxembourg. In addition to the group of approximately 500 Jews from Denmark, Slovak and Hungarian Jews were deported to the ghetto. 1,600 Jewish children from Białystok, Poland, were deported from Theresienstadt to Auschwitz; none survived. About a quarter of the inmates (33,000) died in Theresienstadt, mostly because of the deadly conditions, which included hunger, stress, and disease. About 88,000 prisoners were deported to Auschwitz and other extermination camps, including Treblinka. At the end of the war, 17,247 had survived. An estimated 15,000 children lived in the ghetto.

So with those staggering figures in mind, we entered the camp. We all know that the conditions for concentration camps were appalling…..I’ve read lots of books on the Holocaust and listened to Holocaust speakers, but nothing can prepare you for seeing the actual conditions themselves.

As Sam and I walked through the rows and rows of ‘beds’ and ‘cell blocks’ and ‘showers’ there really wasn’t a lot to say, there was so much running through my head. The people in our tour were equally as somber so we had time to reflect on the tragedy that took place there.

After leaving the camp, our guide also took us to the Jewish Cemetery and Crematorium. At the Crematorium we learned about the mass graves and the Jewish ghetto.  I was really sad we had to rush through the Crematorium, we only had about 10 minutes before it closed so our guide took us through the highlights (we weren’t allowed to take pics but I did find some from the internet and included them here) and then we moved in and toured the town and the Memorial Museum.

Here we had to rush as well which was also frustrating. I could easily have spent hours and hours there. One of the most impactful things I saw at the Memorial Museum was the rows and rows of first hand accounts….letter and diary entries……from prisoners displayed for all to read as well as the large map showing all the different camps throughout Europe.

After we finished at the museum, it was time to return home. Our guide was very knowledgeable and provided us with lots of background and answered all of our questions so the ride home was basically time for us all to reflect…….or lecture.

So the Jewish kid with his dad decided it was now time to educate everyone on this tour about literally everything. Now I am totally going to stereotype here for a minute…..and I can do that because my grandfather was Jewish so I feel like I have a little leeway here.

This kid was your typical Jew….he had the Jew fro and everything……and he basically knew everything and he was only 15. I had no idea that when I got on that tour that I was going to get not just a Jewish history education, but a global events and political commentary for the 30 minute drive back to Prague.

So let’s see…….I learned about ISIS, Barak Obama’s parentage, the voting records of our past presidents, how Mormons are ruining the world with their polygamy, how most Jews are liberal and why, except for his grandma voted for Reagan which upset him but she was attacked by black people in NY so he can understand why she would vote for a conservative party (was this kid even alive during the Reagan administration?!?), international politics, the progression of terrorism in the western world and the rise of Islam in the east, capitalism, oil prices and the need to ‘go green’……I could go on and on. This kid was like a walking Wikipedia!

He talked so loud and actually looked and sounded like Screech Powers from Saved by the Bell. No shit. I exaggerate not. So basically he was that stereotypical ‘one Jew kid’ who is an insufferable know-it-all which I thought was rather ironic since we were doing the ‘Jew thing’ today.

After the longest and most informative 30 minutes of my life, we arrived back in Prague where our tour bus dropped us off near Old Town Square. We were just in time for the most amazing sunset over the Vltava River…..the oranges and pinks were breathtaking. The water literally sparkled.

After watching the sun go down, Sam and I found yet another pizzeria, this one in Old Town Square and ordered the most amazing (and probably fattening) quattro format pasta for dinner. After inhaling dinner, we wandered around Old Town Square, again at night and then made our way back to the castle for some more night photography. By 9:00 pm we were totally done and ready for bed.

We once again fell asleep thinking…..for walking 21,600 steps (just over 4 miles roughly) in one day, our feet sure aren’t that sore……..