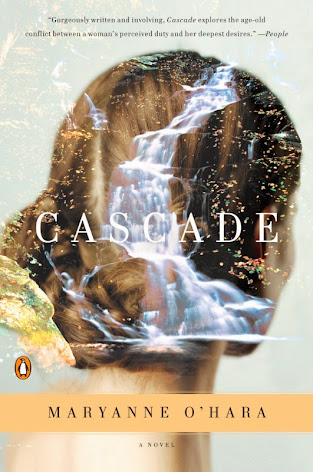 In addition to reviewing this outstanding novel, the author also agreed to stop by for a guest post about the research she did for Cascade. Without further ado please welcome Maryanne O’Hara to The Lit Bitch!

3 things I learned about the 1930s as I researched Cascade

1: Like many people who did not actually live through the Great Depression, I had a whole bunch of stereotypical images in my mind: that everyone tucked cardboard into their shoes, then stood on streetcorners trying to sell pencils and apples. Of course, some areas of the country were hit harder than others, but my book is set in Massachusetts and New York City. When I interviewed people who lived in those places during the time period, I often heard, “Oh yes, things were bad. Although….not so bad for my family. My father always had a job.” I came to realize that it is uncertainty that makes hard times hard for everyone. My characters are not “down and out.” They are average people struggling to make it through the hard times of the era.

2: The United States still felt very new in the 1930s, and after the excess and crash in the 1920s, when there were few social programs to offer safety nets to people, there was this terrible sense of unease. No one knew what was going to happen. Certainly, civilizations throughout history had risen and fallen.  A lot of people were truly afraid that the USA was one big experiment that had failed.

3: I was appalled by how and open casual anti-Semitism was. You wanted to denigrate Roosevelt? You called him Rosenfeld. I reference an actual Roper Poll in Cascade. The poll asked, “What kinds of people do you object to?” The majority answer was, simply, “Jews.” I was horrified, and felt obliged to remind people that not all the bad guys were in Germany.

Thank you for having me visit your blog.

Publication Date: April 30, 2013
Publisher: Penguin Books
Paperback; 384p
A Slate Magazine “Best Books 2012″
A People Magazine “People Pick”
A Library Journal 2012 “Best Bet”During the 1930s in a small town fighting for its survival, a conflicted new wife seeks to reconcile her artistic ambitions with the binding promises she has madeFans of Richard Russo, Amor Towles, Sebastian Barry, and Paula McLain will devour this transporting novel about the eternal tug between our duties and our desires, set during in New York City and New England during the Depression and New Deal eras.It’s 1935, and Desdemona Hart Spaulding has sacrificed her plans to work as an artist in New York to care for her bankrupt, ailing father in Cascade, Massachusetts. When he dies, Dez finds herself caught in a marriage of convenience, bound to the promise she made to save her father’s Shakespeare Theater, even as her town may be flooded to create a reservoir for Boston. When she falls for artist Jacob Solomon, she sees a chance to escape and realize her New York ambitions, but is it morally possible to set herself free?

Maryanne O’Hara was the longtime associate fiction editor at the award-winning literary journal Ploughshares. She received her MFA from Emerson College fifteen years ago, and wrote short fiction that was widely published before committing to the long form. She lives on a river near Boston.
www.maryanneohara.com

Monday, April 29
Review & Giveaway at Peeking Between the Pages

Tuesday, April 30
Feature & Giveaway at Passages to the Past

Wednesday, May 1
Review & Giveaway at Sharon’s Garden of Book Reviews

Friday, May 3
Review at Tiny Library

Wednesday, May 8
Review & Giveaway at Confessions of an Avid Reader

Thursday, May 9
Review at A Bookish Affair
Review & Giveaway at The Relentless Reader

Friday, May 10
Guest Post & Giveaway at A Bookish Affair

Monday, May 13
Review at Write Meg

Wednesday, May 15
Review at Raging Bibliomania

Friday, May 17
Review & Giveaway at The Blue Stocking Society

Monday, May 20
Review at Amused By Books
Review at Oh, For the Hook of a Book!

Tuesday, May 21
Interview & Giveaway at Oh, For the Hook of a Book!

Wednesday, May 22
Review & Giveaway at The Worm Hole

Thursday, May 23
Review at A Book Geek

Friday, May 24
Review & Giveaway at The Picky Girl

Monday, May 27
Review & Giveaway at The Novel Life

Wednesday, May 29
Review at Turning the Pages

Tuesday, June 4
Review at Historical Tapestry & Adventures of an Intrepid Reader
Giveaway at Words and Peace

Wednesday, June 5
Review & Giveaway at A Chick Who Reads

Friday, June 7
Review at A Novel Review
Review & Interview at A Bookish Libraria

One thought on “Guest Post: Cascade by Maryanne O’Hara”