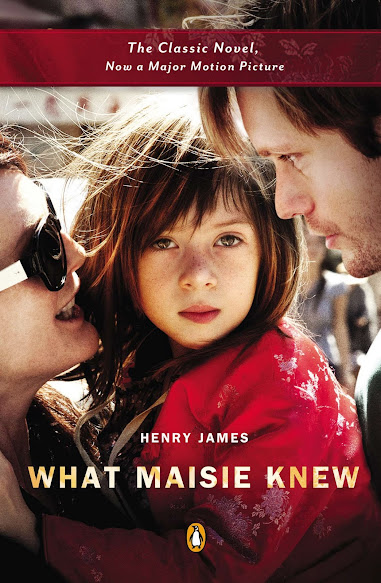 The classics are making a vivacious come back to the silver screen this year! This year we have seen modern takes on old favorites with such blockbusters as Anna Karenina, Les Misérables and The Great Gatsby.

The Henry James classic, What Maisie Knew, has also been made into a feature film!

Though there hasn’t been as much buzz about this film as some of the others, it has been highly praised by the critics after its debut at the Toronto Film Festival in Sept 2012.

The movie has now been released to the masses in May and continues to   garner much critical praise for the performances of Julianne Moore, Alexander Skarsgård, Steve Coogan, and the young Onata Aprile.

But adapting this classic to the silver screen hasn’t been easy. Articles from The New York Times, Wall Street Journal, and others have discussed the difficult task of adapting What Maisie Knew and some of James’ other works to film. But overall this film as been a success thanks to two visionary directors: Scott McGehee and David Siegel.

The original novel is set in 1897, but the film uses a modern setting for this classic. What makes the novel timeless and relevant in modern day, is the drama of a dysfunctional, crumbling home remain stubbornly and viscerally the same as it was in 1897.

Maisie is subjected to custody battles after her parent’s bitter divorce, shuttled back and forth, each selfishly using her as a tool to hurt the other. When asked about the adaptation, Julianne Moore aptly replied, “People have a tendency to think of broken families as modern, but obviously there have been lots of iterations of that theme throughout history. It’s sad that it has that much elasticity — you can set it in any time period.”

This is a classic piece of literature, its cover revitalized with images from the new motion picture, that is sure to delight old readers and new with a subtle, devastating tale of a broken family by the seminal Henry James.

Thanks to the publisher, I am thrilled to be able to offer a paperback copy of this classic novel which contains a film tie in!

(GIVEAWAY OPEN TO US ONLY)

3 thoughts on “Special Feature and Giveaway: What Maisie Knew by Henry James”