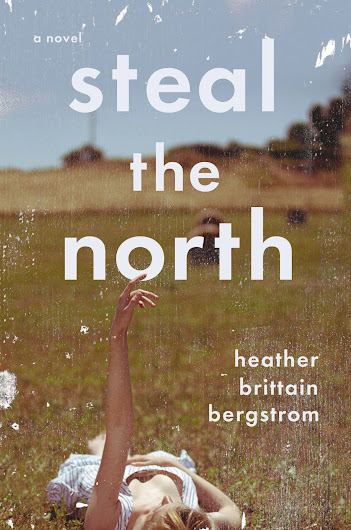 Even though I couldn’t fit Steal the North by Heather Brittain Bergstrom into my review schedule this month, this book caught my eye for a couple of reasons.

First, I liked the idea of a YA novel with a romance between a Native American boy Reuben and a white girl, Emmy. I thought this was something different and new in the YA market.

Often the YA market is full of teenage love triangles and dystopian badass female heroines. Emmy sounded different than the ‘normal’ YA heroine and I thought that was a bold move and made me want to know more.

I loved that this book was set in a region that I was familiar with! So I asked the author specifically to write a post about living in the Snake River area and how the tribes and culture of this special area influenced her novel!

Steal the North is set in eastern Washington, where I was born. The foremost river in Steal the North is the Columbia, particularly the upper Columbia, rather than the Snake River. However, the lower Snake River is definitely in the book. I have one chapter set in the Palouse region of eastern Washington where the lower Snake is a potent force. Famers in the Palouse ship their wheat to the Columbia River via the Snake. My protagonist’s mother and father used to meet along the Snake River (at Bureau of Reclamation parks) back when they were teenagers. Or they’d meet in tiny Snake river farm towns with Indian names, parking in the shade of enormous silos. The main Indian reservation in my novel is the Colville Reservation. Two of the twelve tribes on the Colville were originally from the Snake River: the Palus and the Nez Perce (Chief Joseph and his band of Nez Perce settled on the Colville after their exile to Indian Territory).

My male protagonist, Reuben, a Native American teenager, narrates as many chapters as my female protagonist, Emmy, a white girl from California, sent to eastern Washington for the summer. They meet and fall in love in a trailer park in Moses Lake. I had no intention of narrating in the voice of a Native American character when I began this novel. In fact, Emmy was going to be the sole narrator. Reuben, however, jumped off the back steps of his sister’s trailer and insisted I let him tell his own story. His chapters practically wrote themselves: I just let him speak. Reuben brings a whole culture to his chapters and a richer, more complex look at the eastern half of my home state.

I grew up between the two largest Indian reservations in Washington: the Colville and the Yakama reservations. Grand Coulee Dam divides my home county from the Colville Reservation. Native Americans are very much part of the area where I grew up. There’s extreme prejudice against them for being “drunks” and “lazy,” for being allowed to fish in places where whites can’t (part of their treaty rights), and lately for being allowed to help manage some of Washington State’s natural resources.

As a kid, my school took frequent school field trips to the enormous dams on the Columbia River. Dams scared the hell out of me, so I’d sneak into the tiny Native American cultural centers adjacent to the visitor centers. The museums fascinated me. I didn’t realize as a young girl that the museums were afterthoughts by the Bureau of Reclamation: a nifty place to display the tattered remains of indigenous cultures whose centuries-old and sacred fishing sites were now drowned forever in backwater.

Most places in eastern Washington (rivers, towns, dams, schools, lakes) are named after Indians, as if to honor them, but in reality many Native Americans live in extreme poverty. You can drive on highways and roads in eastern Washington, where to the left is reservation land and to the right is nonreservation land. The difference is incredibly sad and unfair. Native Americans in Washington State have survived despite everything whites have done to their land and heritage. Just as southern literature is still haunted by the legacy of slavery and racism against blacks, so is western literature haunted by the near annihilation and continued marginalization of the Indian. In a way, through the act of writing Steal the North, I stepped back into those tiny museums.

Perhaps it’s because I grew up so isolated (geographically, and my family was part of a cultish fundamentalist Baptist church) that I feel compelled to represent Native Americans who are even more isolated in the same part of the country. Their isolation keeps them united as a people, as a nation, but it leaves them without jobs and resources. The landscape of eastern Washington—the coulees, sage, wind, rivers, lakes—is shared by whites and Indians. It has shaped both cultures. The main difference is that Indians have lived on the land for thousands and thousands of years. The land holds the bones of their ancestors. They see themselves as the appointed caretakers. The legends that explain the land originated in their languages. Their spirits continue to linger, as Chief Seattle warned whites, everywhere. I sensed these spirits as a child. You just had to listen. I’ve always been a listener. And I’ve always been an observer.

Too often people think of Indians as relics from the past. In my novel, they are not relics, they are people living their lives as kids in high school, struggling with algebra, and playing football; health care workers; dancers at powwows; riders at rodeos; teenagers cruising in trucks and eating gas station nachos; old people waiting at medical clinics; all ages drumming at churches; elders wearing Nikes and praying beside creeks for the salmon to return.

I have deep personal connections to the Snake River. Three of my four grandparents, as well as my father, were born in Idaho, near the Snake. My grandmother used to tell stories of how the Snake flooded their house every spring. I broke my ankle when I was fifteen tubing down the Snake River. Last summer, on a research trip, I drove my daughter to the Snake River Canyon. As usual, at dusk, the wind was howling—almost screaming through the canyon. A wide smile spread across my face. My daughter, a California native, got back into the car. The Pacific Northwest is a rugged place, but it’s in my blood and bones—as much as in my fiction. I have to admit I love the Columbia far more than the Snake. However, when I look at the Snake River, it feels as if I’m looking at old sepia-colored family photographs. In one photo my grandmother is trying in vain to clean the muddy river stains from her linens.

Emmy is a shy, sheltered sixteen-year-old when her mom, Kate, sends her to eastern Washington to an aunt and uncle she never knew she had. Fifteen years earlier, Kate had abandoned her sister, Beth, when she fled her painful past and their fundamentalist church. And now, Beth believes Emmy’s participation in a faith healing is her last hope for having a child.

Emmy goes reluctantly, but before long she knows she has come home. She feels tied to the rugged landscape of coulees and scablands. And she meets Reuben, the Native American boy next door.

In a part of the country where the age-old tensions of cowboys versus Indians still play out, theirs is the kind of magical, fraught love that can only survive with the passion and resilience of youth. Their story is mirrored by the generation before them, who fears that their mistakes are doomed to repeat themselves in Emmy and Reuben. With Louise Erdrich’s sense of place and a love story in the tradition of Water for Elephants, this is an atmospheric family drama in which the question of home is a spiritual one, in which getting over the past is the only hope for the future

Find her on Goodreads http://www.goodreads.com/author/show/4196296.Heather_Brittain_Bergstrom