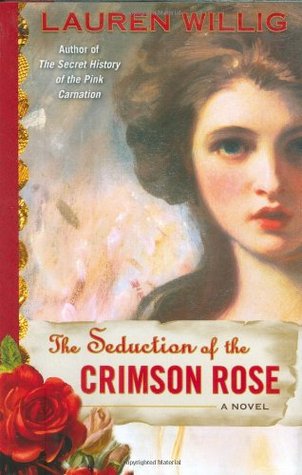 Many of you die hard ‘Pink Carnation‘ fans will undoubtedly notice that flowers play a huge role in the books and are meant to convey some symbolism and foreshadowing in the series and books.

Each character embodies the title flower in some way or another. For me, one of my favorite Pink heroines was Mary Alsworthy from The Seduction of the Crimson Rose.

The rose is not only beautiful and alluring but thorny and at times dangerous to an inexperienced handler. It’s a classic flower long associated with beauty and love. It’s chic, regal, and alluring, while at the same time the thorns remind us of suffering and sacrifice.

What better flower than the red rose to describe Mary Alsworthy? Mary has a reputation as a manipulating temptress…..fiery, fierce, unyielding, fearless, ruthless and proud. She is exquisite and alluring–especially to her love interest Lord Vaughn.

Though she is beautiful, she also makes no apologies for who she is….to her society, she seems like a cold, heartless, and manipulative woman who cares only for herself.

Like the thorns of the rose remind us….Mary has suffered and sacrificed much. Mary’s hopes of eloping with Lord Pinchingdale were ruined when Letty uncovered their plan…now alone with no prospects and her best chance at independence now married to her sister, Mary faces a third season ‘on the shelf’ with Letty and Lord Pinchingdale financing her debutante season.

Like the rose, under all the physical, stunning beauty, there lurks a strength, resolve, and determination in Mary’s character that we haven’t seen in any of the other Pink books up until this point.

The previous three books: The Pink Carnation, The Black Tulip, and The Green Emerald, all feature heroines that are maybe a little rebellious, spunky, sensible, or dutiful.

Carnations symbolize love as well but their ruffly appearance isn’t quite the chic beauty that roses envelope. While tulips symbolize elegance and grace much like Hen in the second Pink book.

The third book is the only Pink book to not feature a flower, but green emeralds often represent hope and Letty is often seen as the level headed heroine with the most hopeful match among the heroines thus far.

Mary is different…she is a thorny beautiful red rose. She is proud, beautiful, and haughty but she is also hard as nails which is what ultimately draws Lord Vaughn to her.

Lord Vaughn recognizes the strength and determination in Mary and he can’t help but be attracted to a woman who is entirely unyielding, autocratic, and self-serving. She is a woman who can match him wit for wit, strength for strength, will for will. She is his equal not his inferior.

What I love most about Willig’s choice of the red rose for this books is that the symbolism actually works for both Mary and Lord Vaughn since Lord Vaughn is also attractive and sexy while at the same time often seen as the villain with a thorny exterior.

The red rose and Mary Alsworthy are synonymous with beauty, strength, sacrifice, and of course…..love.

A big thank you to The Bubblebath Reader for allowing me to post a feature for her Pink for All Seasons tour this year!