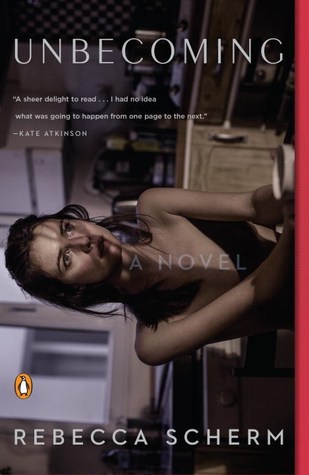 In January, I was lucky enough to get to review UNBECOMING by Rebecca Scherm! It was a complex thriller that had a bit of an edgy, gritty side which I loved!

Now this wonderful read is out in paperback just in time for the holidays! If you are needing to pick up a last minute gift for the reader on your list this would be a good option!

Here is a little bit about the novel: UNBECOMING is a novel of literary suspense about a small-town girl who dabbles in self-forgery even before being swept into the world of international art fraud—but then makes herself at home in a dangerous, dare-devil milieu far from everything she once knew. Scherm’s delicately nuanced heist novel has echoes of Alfred Hitchcock and Patricia Highsmith, and earned wide praise and comparisons to Gillian Flynn and Donna Tartt.

On the grubby outskirts of Paris, Grace restores bric-a-brac, mends teapots, and re-sets gems. She calls herself Julie, says she’s from California, and slips back to a rented room at night.  Furtively, she checks her hometown newspaper online. Back in Garland, Tennessee, two young men have been paroled and Grace knows that once they are free, her life will not be her own.

Riley Graham was the charming, favored small-town son who made Grace his when the two were very young.  Embraced by Riley’s family, especially his mother,  Grace polished her role as surrogate daughter and idealized girlfriend.

But she stumbles over a dark passion for Riley’s best friend, and flees Garland for Manhattan, NYU, and a seedy job with an art appraiser to pave her way into the competitive social scene. This leads only to dropping out and landing back home, broke and shaken.  There, using her new skills and a knack for re-invention, Grace begins methodically to plan a robbery of a local historical museum with Riley and his friends.

The heist goes bad—but not before Grace is on a plane to Prague with a stolen canvas rolled in her bag, a new haircut, and a new name.  And so begins a cat-and-mouse waiting game as Grace’s web of deception and lies unravels. Which part of her past will catch up with her first?

UNBECOMING is a major debut novel of literary suspense about a small-town girl who dabbles in self-forgery even before being swept into the world of international art fraud—but then makes herself at home in a dangerous, dare-devil milieu far from everything she once knew.

Rebecca Scherm is a graduate of New York University and the Helen Zell Writers Program at the University of Michigan. Her work has appeared in The New York Times, The Toast, Subtropics, Jezebel, and elsewhere. She lives in Michigan, where she is working on her second novel, Beta.

REBECCA SCHERM WILL BE TOURING TO:

“Startlingly inventive…As for Grace herself, she’s a real work of art—even if she is a fake.” —New York Times Book Review

“Intricately detailed and rich with art and deception, Scherm’s debut is a treat.” —People

“[A] suspenseful and terrific debut…recounted with convincing psychological insight and in rich detail.  UNBECOMING is a sorrowful coming-of-age story that blossoms into a cautionary tale—and then into something all its unsettling own.” —Wall Street Journal

“A fascinating exploration of an ambiguous character.” —The Boston Globe

“Scherm has elevated the heist novel beyond entertainment. Like a painting that becomes more intriguing the longer you study it, UNBECOMING is a genuine work of art.” —Minneapolis Star-Tribune

“A marvel: part noir mystery, part feminist coming-of-age, part meditation on the way we tell ourselves the stories of our own lives…[UNBECOMING] will absolutely absorb you.” —Buzzfeed

“Nothing about Scherm’s debut novel feels done before, except, of course, the feelings of nail-biting suspense and page-turning curiosity.”—Glamour.com

Pick up your copy or gift it this holiday season here!