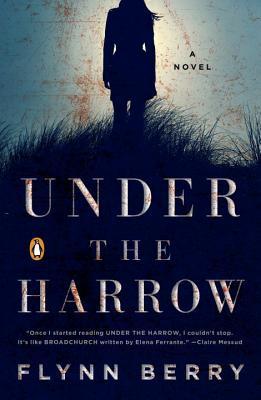 This summer has been a major in-house favorite at Penguin Books and it’s also been getting rave reviews from early reviewers!

I love a good thriller as much as the next person and I am so mad that I couldn’t fit this one into my review schedule for the summer but I wanted to make my readers aware of this new release that sounds unbelievably chilling and haunting!

Claire Messud said, “It’s like Broadchurch written by Elena Ferrante. I’ve been telling all my friends to read it — the highest compliment. Flynn Berry is a deeply interesting writer.” Beneath the mystery of UNDER THE HARROW is a heartbreakingly honest portrait of sisterhood’s contradictions and complexities, and a keen understanding of grief and trauma, what Kirkus called “the deep, all-encompassing loss felt by those left behind.”

When Nora takes the train from London to visit her sister in the countryside, she expects to find her waiting at the station, or at home cooking dinner. But when she walks into Rachel’s familiar house, what she finds is entirely different: her sister has been the victim of a brutal murder.

Stunned and adrift, Nora finds she can’t return to her former life. An unsolved assault in the past has shaken her faith in the police, and she can’t trust them to find her sister’s killer. Haunted by the murder and the secrets that surround it, Nora is under the harrow: distressed and in danger. As Nora’s fear turns to obsession, she becomes as unrecognizable as the sister her investigation uncovers.

A riveting psychological thriller and a haunting exploration of the fierce love between two sisters, the distortions of grief, and the terrifying power of the past, Under the Harrow marks the debut of an extraordinary new writer.

Flynn Berry is a graduate of the Michener Center for Writers and has been awarded a Yaddo Residency. UNDER THE HARROW is her first novel. The story is inspired by real-life crimes: a series of murders on Long Island, and a home invasion/murder that took place near her home in Austin. Berry took college criminology courses while at The Michener Center, which lends the novel a gritty realism.

Praise for UNDER THE HARROW by Flynn Berry

“Once I started reading UNDER THE HARROW, I couldn’t stop. It’s like Broadchurch written by Elena Ferrante.”

Flynn Berry’s UNDER THE HARROW might fit nicely among the sunscreen and beach towels . . . this debut is bound to make it onto many ‘to read’ lists.” —Elle.com

This psychologically intense and darkly atmospheric mystery reminded me of Patricia Highsmith in its vivid style and toxic substance. I was completely drawn into Nora’s grief as it propelled her on a hunt for the killer, so much so that even when I knew something was a bit off-kilter I was too committed to Nora to care.”—Milwaukee Journal-Sentinel

“I read UNDER THE HARROW through the night—I couldn’t put it down. Berry’s deft touch with atmosphere and emotion are sure to make this a stand out.”—Alex Marwood, author of The Wicked Girls and The Killer Next Door

“Berry’s cool voice and the world it invokes are the stuff of classic crime fiction, but this is deeper than a caper—it is the story of a woman working through her stages of grief.”—RT Book Reviews

“A meticulously wrought new thriller . . . [UNDER THE HARROW] envelops you in its suspenseful plot from the first page . . . It’s not solely a plot-fueled thriller, though: Berry’s sentences are spare and biting.”—Huffington Post, “Summer 2016 Books You Won’t Want To Miss”

“[A] keenly wrought debut… Berry accomplishes the rare feat of making the victim come alive on the page without ever sacrificing the deep, all-encompassing loss felt by those left behind.”—Kirkus Reviews

[A] tight debut….Readers will enjoy trying to ferret out the clues along with Nora, but those who think they have the mystery figured out may be caught off guard.”—Publishers Weekly

“What grabbed me by the bones and hurled me through this read-in-one-sitting novel wasn’t the plot, as compelling and tenacious and suspenseful as it is. Rather, it was Flynn Berry’s perfect, unrelenting prose that pinned me to my chair. This is flawless storytelling.”—Jill Alexander Essbaum, author of Hausfrau

“This moody, atmospheric mystery hits all the right notes. I was engrossed in this story of two elusive sisters and their equally elusive truths.”—Janice Y. K. Lee, New York Timesbestselling author of The Expatriates

“A nail-biter that fans of Gone Girl and Girl on the Train will no doubt love, UNDER THE HARROW is swiftly carried along by a momentum of unraveling certainties that ramp up with every page, building to the end’s thrilling crescendo. I loved this dark, chilling book and couldn’t put it down.”—Suzanne Rindell, author of The Other Typist

“Flynn Berry’s writing is clear and spare yet textured and instantly immersive. You know from the get go that something is not quite right, and this sense of unease and mystery grows and grows as you discover more about Nora’s complex relationship with her sister. I read UNDER THE HARROW very quickly and when I wasn’t reading it I was thinking about it.”—Harriet Lane, author of Her

“UNDER THE HARROW is a compulsively readable and atmospheric novel that I consumed almost in one sitting. The portrayal of the two sisters is subtle, original and compelling.”—Rosamund Lupton, author of Sister

“UNDER THE HARROW offers exactly the kind of voracious, absorbing, one-sitting read that readers love. Taut with suspense, it is full of insight and suffused with emotions that will move you. The central relationship between two adult sisters is a heartbreaker, the tenderness, the loyalty, and the sorrow all ringing so true.”—Robin Black, author of Life Drawing

“UNDER THE HARROW airdrops the reader into the unsettling aftermath of trauma, where shifting memories collide with obsession in a propulsive story of love, grief, and murder. Gripping and nuanced, this stylish thriller is not to be missed.”—Koethi Zan, author of The Never List

“[A] keenly wrought debut… Berry accomplishes the rare feat of making the victim come alive on the page without ever sacrificing the deep, all-encompassing loss felt by those left behind.”

UNDER THE HARROW (A Penguin Original; On sale: June 14, 2016; ISBN: 978-0-14-310857-3; $16)is Flynn Berry’s debut novel: a chilling story with a slow-burning feeling of dread, a sophisticated psychological edge, and a sharpness that Gillian Flynn fans will love. It grabs you immediately and doesn’t let go.

Beneath the mystery of UNDER THE HARROW is a heartbreakingly honest portrait of sisterhood’s contradictions and complexities: jealousy, rivalry, long-held grudges, devotion, unspoken understanding, and forgiveness. Berry’s spare, elegant writing is thrilling, dominated by emotion yet subtly anchored by verisimilar details that stick in your head as vividly as your own memories. Her gift for capturing the extraordinary emotions of trauma recalls many of her favorite contemporary writers: Kate Atkinson, Tessa Hadley, and Paula Hawkins. UNDER THE HARROW is a thrilling and heartbreaking novel that will stay with readers long after they discover its surprising resolution.