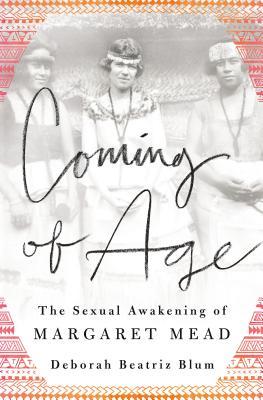 Though I have a Master’s in American History, I rarely read biographies. I don’t know if that’s because I’ve spent so much of my academic career reading history books and researching topics….but when I sit down to read I like reading fiction….preferably with history.

Now that said, I do on occasion read biographies or nonfiction if the subject sounds interesting etc. I was so sad that I couldn’t fit this book into my review schedule this summer because it sounds like one of those books that would be right up my alley! So instead I decided to do a special feature complete with a Q & A from the author so be sure to keep reading!

The startling coming-of-age story of famed anthropologist Margaret Mead whose radical ideas challenged the social and sexual norms of her time.

The story begins in 1923, when twenty-two year old Margaret Mead is living in New York City, engaged to her childhood sweetheart and on the verge of graduating from college. Seemingly a conventional young lady, she marries, but shocks friends when she decides to keep her maiden name.

After starting graduate school at Columbia University, she does the unthinkable: she first enters into a forbidden relationship with a female colleague, then gets caught up in an all-consuming and secret affair with a brilliant older man. As her sexual awakening continues, she discovers it is possible to be in love with more than one person at the same time.

While Margaret’s personal explorations are just beginning, her interest in distant cultures propels her into the new field of anthropology. Ignoring the constraints put on women, she travels alone to a tiny speck of land in the South Pacific called Samoa to study the sexual behavior of adolescent girls. Returning home on an ocean liner nine months later, a chance encounter changes the course of her life forever.

Now, drawing on letters, diaries, and memoirs, Deborah Beatriz Blum reconstructs these five transformative years of Margaret’s life, before she became famous, revealing the story that Margaret Mead hid from the world – during her lifetime and beyond (summary from Goodreads).

The book was researched through letters with Mead’s professional connections, lovers, diaries and memoirs to explore the college and early years of Mead in the 1920s. It is intensely personal to documentary filmmaker and acclaimed author Deborah Blum because of her chance meeting with Mead when she was a young woman.

Q and A with author Deborah Beatriz Blum

Margaret Mead was a firecracker. She was born in 1901, at the end of the Victorian era and raised in a world in which women had few opportunities. Young ladies were expected to marry early and were not encouraged to pursue any kind of work outside the home. Margaret became famous because she upended all the social and sexual constraints that kept women in their place. It’s fair to say that without her, the revolutions of the 1960s — including women’s liberation and free sex — would never have happened.  She did all of this by being, of all things, an anthropologist. It’s remarkable really, when you think about the changes she was able to bring about.

When the story begins, Margaret, engaged to her childhood sweetheart, is living in New York City and about to start graduate school in anthropology at Columbia University.

Married life provides security, but is lacking in passion. When she is unexpectedly caught up in an affair with a brilliant older man, and then in a forbidden relationship with a female colleague, she begins to question the concept of monogamy.

She also begins to test the limits in her professional life.

As a graduate student in anthropology she is expected to do fieldwork with a Native American tribe. Over the objections of friends, family and professional associates, she insists on going to Polynesia. In August of 1925, she travels 9000 miles, first by train then by ocean liner, to a tiny island in the South Pacific called Samoa. Once there she investigates the way adolescent girls in a “primitive culture” differ from their counterparts back in America. The subject coincides with issues she’s wrestling with in her own life. She writes up her observations in a book called Coming of Age in Samoa, which is published in 1927 and becomes an unexpected bestseller.

By introducing the American public to the idea that unmarried couples can enjoy carefree sex, Margaret triggers a sexual awakening that is to continue for decades.

My interest in Margaret Mead was triggered by a chance encounter.  At the time, Mead was in her early seventies and world famous, I was a recent college grad, working as a receptionist at a small publishing company in Cambridge, Massachusetts. Late one afternoon, while I was sitting at the switchboard and counting the minutes until closing time, I heard a noise in the foyer. Looking down the hall I saw an old woman struggling to get out of a heavy overcoat. Her hair was mousy gray, her shape squat and dumpy. Surprisingly, her mere presence was causing a commotion among the men. I asked a co-worker to tell me who she was. With great reverence she whispered, “That’s Margaret Mead.”

I’d never seen men behave that way around a woman who wasn’t beautiful. What gave this old woman so much power? Without my realizing it, a seed had been planted. I began to read about her, starting with her memoir. The ideas she floated had to do with finding one’s own unique path in the world and having the confidence to assert oneself. This resonated – it was the way I wanted to live my own life.

As a young woman, Margaret came to believe that she was incapable of maintaining “a single hearted devotion.” She questioned why love and intimacy need be limited to one person at a time, or, for that matter, limited to the opposite sex. She gave herself permission to live outside the norms of accepted society. For the time in which she lived, her behavior was extremely radical, if not downright taboo.

Margaret was, at the same time, anxious to safeguard her reputation. She knew if the details of her forbidden affairs ever came to light her career would be ruined. Her secrets were not laid bare until 2009, many years after her death, when her letters entered the public domain. I was able to make a digital copy of thousands of these letters. They provided a window into her mind during her formative years.