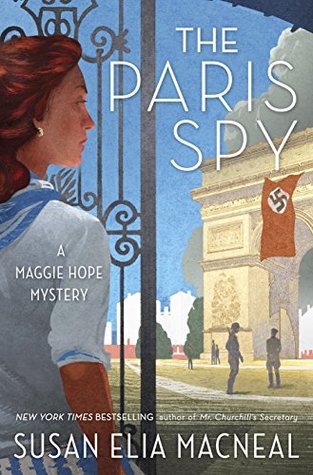 Earlier this year I read the latest Maggie Hope mystery, THE PARIS SPY and was once again hooked on our favorite secretary turned spy!

I happened to find this series via the cover. I saw the cover on one of my social media platforms back in 2012 and just knew that I had to read this book…..I was fortunate enough to get my hands on an ARC when it came up and was hooked!

I have since read all of the Maggie books and was thrilled to learn that more are planned—I am not ready to say goodbye to my favorite red head just yet.

This series has always been solid….each book rates around a 4 or a 5 for me. Sometimes I don’t always like the direction that Maggie goes but I love that she is consistent and a different kind of heroine. Today the wonderful creator of Maggie, Susan Elia MacNeal, celebrates the release of her latest novel in paperback!

If you have yet to discover this series, start with the first book, MR CHURCHILL’S SECRETARY, but if you are a long time fan of this series like me, then be on the look out for the paperback version of this book available 4/17!

It’s springtime in Paris, 1942. The Nazis have captured one of England’s most intrepid spies, who soon discovers that the Germans may have a mole working deep in the British SOE. From Paris, Maggie Hope must unmask that traitor—before the enemy learns WWII’s deadliest secret: the site of the planned Allied invasion in Normandy.

THE PARIS SPY is MacNeal’s most captivating story to date in her award-winning series. Blending thoroughly researched WW II historical facts with one-of-a-kind storytelling and a resourceful, daring heroine, this is an unforgettable read that will transport you straight to the murky, perilous days of a city at war.

Susan Elia MacNeal is the New York Times, Washington Post, and USA Today bestselling author of the Maggie Hope mystery series. She is the winner of the Barry Award and was shortlisted for the Edgar and several other awards. She lives in Park Slope, Brooklyn, with her husband and son.

Praise for THE PARIS SPY

“A fast-paced climax leads to an ending that will leave readers eagerly awaiting the next installment.” —Publishers Weekly

“You will grieve with Paris. You will be outraged by the destruction. You will be terrified for all the heroes, be there with them every step, and care desperately that they succeed and survive. And perhaps above all, like me, you will be overwhelmed with their sacrifice for the freedom we still enjoy.” —Anne Perry, New York Times bestselling author of the Charlotte and Thomas Pitt series and the William Monk series

“This has to be Maggie Hope’s. Vivid and fast-paced, crammed with authentic detail, The Paris Spy is an extraordinary trip through the edgy drama of wartime Paris, skillfully plotted and studded with cameos by real historical figures.” —Jane Thynne, author of the Clara Vine series

“The Paris Spy is a mystery you won’t put down until the absolutely stunning conclusion. Only Susan Elia MacNeal—and the extraordinary Maggie Hope—could wrap such a tale of courage and betrayal around a secret that will cost lives and honor to protect.” —Charles Todd, New York Times bestselling author of the Inspector Ian Rutledge series and the Bess Crawford series

“With its riveting plot and cliff-hanger finish, this is a solid addition to a series as well researched as it is entertaining.”