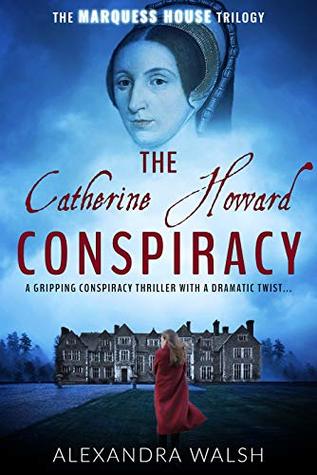 I have a special treat for you historical fiction fans today and that’s an excerpt from The Catherine Howard Conspiracy!

I haven’t had a lot of Tudor era books on my blog for a while, and though I love the period, I went through a long stretch where I read a few too many Tudor era novels so I had to give it a break. But fortunately, this book caught my eye and made me excited all over again for Tudor historical fiction.

Today I have a little sneak peak for you guys and can I just say how interesting this one sounds? And it’s the first in a new series!

What secrets were covered up at the court of Henry VIII …?

When Catherine Howard arrives at the court of King Henry VIII to be a maid of honour in the household of the new queen, Anne of Cleves, she has no idea of the fate that awaits her.

Catching the king’s fancy, she finds herself caught up in her uncle’s ambition to get a Howard heir to the throne.

Terrified by the ageing king after the fate that befell her cousin, Anne Boleyn, Catherine begins to fear for her life…

Mary inexplicably cut all contact with Perdita and her twin sister, Piper, but she has left them Marquess House, her vast estate in Pembrokeshire.

Perdita sets out to unravel their grandmother’s motives for abandoning them, and is drawn into the mystery of an ancient document in the archives of Marquess House, a collection of letters and diaries claiming the records of Catherine Howard’s execution were falsified…

What truths are hiding in Marquess House? What really happened to Catherine Howard?

And how was Perdita’s grandmother connected to it all?

THE CATHERINE HOWARD CONSPIRACY is the first book in the Marquess House trilogy, a dual timeline conspiracy thriller with an ingenious twist on a well-known period of Tudor history (summary from Goodreads).

Forty minutes later, Perdita slid into the seat opposite Warren.

“Anything interesting?” she asked, nodding to the broadsheet neatly folded in front of him so he could fill in the crossword on the back.

“Not much,” he said. “Although, there is an obituary of your grandmother.”

Perdita felt her heart contract and said lightly, trying to mask any disappointment: “Does it mention Piper and me?”

Warren reached across the table and squeezed her hand.

Perdita shook her head. “No, I read an obituary earlier, they’re probably all the same.”

Ignoring both the proffered newspaper and Warren’s curious look, she pulled the menu towards her, dropping her head so he could not see the tears filling her eyes.

She found it difficult to explain her emotions to Warren. The obituary would, no doubt, eulogise Mary Fitzroy’s brilliance and her outstanding work as an historian, presenting her life as a list of scholarly achievements, interspersed with some personal details to give readers a sense of the woman behind the achievements. Yet, these comments about Mary’s family represented the most painful parts of Perdita’s life. Reading one obituary had been enough, she did not want to read any more.

Blinking away her tears, she scolded herself: pull yourself together, she thought, Mary showed no interest in you while she was alive, why would you or Piper be mentioned in her obituary?

She had finished eating and was pouring coffee when the manager interrupted them. He seemed agitated as he handed her a thick cream envelope.

“Dr Rivers, a message has arrived for you,” he said. “A courier is waiting if you wish to send a reply. I’ll be happy to relay any answer.”

The manager nodded and retreated. Perdita turned to Warren, her eyebrows raised in confusion. “What the…?”

“Open it,” urged Warren, who seemed suddenly nervous. “It’s probably from the University asking if they need to send a replacement.”

“Unlikely,” said Perdita. “No one I work with knows about my connections to Mary Fitzroy. Anyway, they’d have emailed, not gone to the expense of a courier.”

She slit open the envelope and unfolded an expensive, heavyweight sheet of headed writing paper. In one corner was a small and unusual emblem of a portcullis surrounded by a repeating pattern of tiny swords, interwoven with a plant Perdita did not recognise. The motto underneath was in Latin: Ecce signum!and across the top, the word Jerusalem.

“Behold the proof!” she murmured, translating the motto. Across the table, Warren stiffened slightly, waiting while Perdita read the letter. White-faced she looked up from the short note and handed it to him.

“Read it,” she said, her voice hoarse.

“It’s from Mary Fitzroy’s solicitor, he’s requested a meeting of the utmost urgency and has suggested today at 11 a.m.”

“Marquess House, Mary’s estate in Pembrokeshire. It’s not far from here,” she replied.

He looked at her in confusion. “This morning…?”

Perdita nodded. “Am I being paranoid?” she whispered. “Or is there something strange happening?”

“I live in London and, in theory, have no connection to Mary,” she said. “How do they know about me and, more importantly, how the hell do they know I’m here?”

“There are lots of ways they could know you’re here,” he said calmly.

“The news of the dig has been in the local paper,” he continued. “As one of the more senior members of the team and a known expert in the symbolism of jewellery, your name was mentioned…”

“But why have her solicitors been keeping tabs on me?”

Warren took the letter from her and smoothed it out on the table. “Do you see this?” He pointed to the emblem in the corner and Perdita nodded. “Jerusalem is a historical trust that funds archaeological digs, particularly in this area. Perhaps they were financing yours and, if your grandmother’s solicitors are affiliated to them, it’s likely your grandmother was aware of which projects they were involved with this summer. It could have been your grandmother who was keeping an eye on you, not the legal firm, and now with her sudden death, you are fortuitously in the right place for the solicitors to contact you quickly.” Perdita was unconvinced and beginning to marshal counterarguments, when he added with a final flourish: “It’s a village, Perds, it isn’t London, people know each other’s business.”

Looking into his calm, grey eyes, she sighed. She knew he was trying to offer a rational explanation and, now he had put it so bluntly, she agreed with the assessment of how the solicitors knew her whereabouts. It did not stop the powerful sense of pain that had shot through her at the thought that her grandmother might have been monitoring her. Mary may have been aware of her proximity, but she had still made no attempt to contact her. This was why she was reacting so skittishly to the letter: after a lifetime of being ignored by Mary Fitzroy, it felt strangely sinister to be contacted by her solicitor the moment her grandmother had died. It was unlikely she and Piper had been remembered in her will, so for what possible reason had she been summoned to Marquess House?

“Will you go?” Warren’s voice floated across her teeming brain, bringing her back to the present and the sunny dining room.

“Yes,” said Perdita, tight-lipped but determined. She glanced at her watch, then pushed away her unfinished cup of coffee. “I’ll tell the manager to let them know we’re coming.”

In a swift, elegant movement, she stood and walked from the room. The manager was hovering behind the reception desk.

“Tell them, I’ll be there at 11 a.m.,” she said, then ran up the stairs to her room. Piper was in Austin, Texas, so she was six hours behind them and still asleep. Taking a deep breath, Perdita walked to the window and looked out over the landscaped gardens, breathing deeply to steady her nerves. When the door clicked open, she did not turn, knowing Warren would come to her and encircle her in his arms as he had done so many times before when the strangeness of her family situation had shaken her to the core.

“Whatever they say, whatever they do, you don’t have to stay or listen to anything that might upset you,” he said, his arms around her waist, his head resting next to hers.

“I know,” she said, her voice hoarse with tears. “But you understand, don’t you? I have to know, to see…”

She felt rather than saw him nod. “Of course,” he said. “I’ll drive us there.”

From tales spun for her teddies when she was a child (usually about mermaids) to film scripts, plays and novels, Alexandra Walsh has always been a storyteller. Words are her world. For over 25 years, she has been a journalist writing for a wide range of publications including national newspapers and glossy magazines. She spent some years working in the British film industry, as well as in television and radio: researching, advising, occasionally presenting and always writing.

Books dominate Alexandra’s life. She reads endlessly and tends to become a bit panicky if her next three books are not lined up and waiting. Characters, places, imagery all stay with her and even now she finds it difficult to pass an old wardrobe without checking it for a door to Narnia. As for her magical letter when she was 11, she can only assume her cat caught the owl!

Alexandra’s other passion is history, particularly the untold tales of women. Whether they were queens or paupers, their voices resonate with their stories, not only about their own lives but about ours, too. The women of the Tudor court have inspired her novels. Researching and writing The Marquess House Trilogy (Book One: The Catherine Howard Conspiracy) has brought together her love of history, mysteries and story telling.

2 thoughts on “Excerpt: The Catherine Howard Conspiracy by Alexandra Walsh”