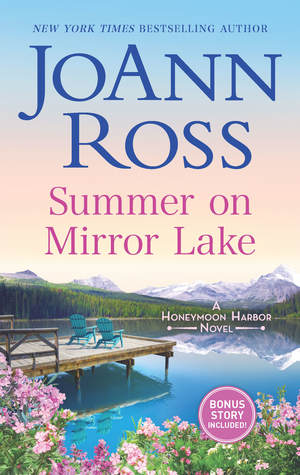 This summer is full of new and exciting beach reads and I am loving some of the new releases! One of my favorite ‘beach reads’ authors is JoAnn Ross. She has written a number of books and her talent as a seasoned writer shines through in her books.

She has a wonderful new novel out not, SUMMER ON MIRROR LAKE, and I am thrilled to be able to offer a sneak peak! I have an excerpt below that you don’t want to miss out on.

I also have a copy up for giveaway on my Instagram page this week so head on over to my IG page and be sure to enter for a chance to win!

Over the course of their summer romance, Gabe gets a taste of the life he might have had if he’d taken a different path. But with his return to New York City looming on the horizon, he’ll have to choose between the success he’s worked tirelessly for and a ready-made family who offers a very different, richly rewarding future…if he’ll only take the risk (summary from Goodreads)

Frustrated, and coveredin flour, she snatched the re­ceiver from its base on the counter, not recognizing the number. “Who is this?”

Just that. No name. Not that she needed one. She’d dreamed of that voice crooning sweet nothings to her while they made love in a Viking faering anchored in Serenity Cove.

“I’m sorry, but I’m a bit busy here.” She sneezed, cre­ating a new cloud of flour.

“Can you take time to open the door?”

“No. I can’t let you in. I already told you, I’m conta­gious.” She was also wearing pajamas printed with ice cream sundaes. Not to mention the flour all over the front of them, in her hair and undoubtedly all over her face.

“I also have cold medicine. And the 50th Anniversary DVD of Charade.”

“Where did you find that?” Blockbuster had closed years ago, there was only a single rack of rentals at Mar­shall’s Market and she sincerely doubted he’d brought the romantic suspense comedy with him from New York.

“After Brianna told me it was your favorite movie, I called my mom. She always made us watch old movies when it was her night to choose. I figured she’d have this. Because it’s a classic.”

“Wasn’t that handy? Did you ever think your sister’s trying to set us up?”

“It occurred to me.” She could hear the shrug in his voice.

“And you’re not bothered by that?”

“Not particularly. I’m only bringing soup, cold medi­cine and an old movie. I’m not asking you to wear my class ring.”

It wasn’t a letterman’s sweater, but it was close enough to have her uneasy that they were thinking along the same lines. He’d be so much easier to resist if he were more like horrid Greed-Is-Good Gordon Gekko.

She heard voices, a brief conversation, on the other side of the door. “That was your neighbor,” he said. “Wanting to make sure I wasn’t harassing you. If you don’t let me in, we’ll start drawing a crowd.”

“Or you could leave.”

“But then you wouldn’t have the chicken soup. Which is supposedly not only good for your soul, but also for colds.”

“I’m beginning to understand why you’re so success­ful.”

“No.” She sneezed again. A second time. Then a third. “Because you won’t take no for an answer.”

Before she could answer, she heard another voice, this one a female’s. Then his baritone response, followed by a girlish giggle.

“That was your landlady,” he informed her of what she’d already figured out. “She thinks I’m very sweet. And a hottie. Her words, not mine.”

“Mrs. Moore is in her eighties. And I don’t want to burst your bubble, but while you may be good-looking, in a Black Irish way, she also hits on the UPS guy when he’s wearing his brown summer shorts. Along with the college kid delivering pizzas to earn college money. She’s an equal opportunity flirt.”

“I imagine it helps keep her young. My grandparents have been married for decades, but I dropped by the house one morning and noticed that my grandmother had put on fire-engine red lipstick before going out to Luca’s pasta making class at the senior center. But I’ll take your compliment.”

“It wasn’t a—oh, damn.” Realizing that he wasn’t going to go away and they were definitely going to soon be drawing a crowd, she marched over to the door and flung it open. And felt that same skip of her rebellious heart and those butterflies start fluttering their wings again. But since last night, they’d turned into great blue herons like the ones that nested at Herons Landing. “You might as well come in.”

“Thanks.” Her already-tiny foyer seemed to shrink even more when he entered. He also took the air out of the room, making it difficult to breathe. Even dressed in jeans, a black Mannion’s Brewery T-shirt and work boots, the man radiated a masculine charisma that prob­ably drew women to him like a magnet.

Don’t think of that! Blaming her stuffed-up head for that uninspired simile, as those gray eyes swept over her, she remembered what she must look like. “I had a flour bag mishap while searching in the cabinet for honey.” She combed her fingers through her bed head in an attempt to somewhat tame it, which only succeeded in sending up another cloud of flour.

New York Times bestselling author JoAnn Ross has written over a hundred novels for a bunch of publishers. Two of her titles have been excerpted in Cosmo and her books have also been published by the Doubleday, Rhapsody, Literary Guild, and Mystery Guild book clubs.

A member of the Romance Writers of America’s Honor Roll of best-selling authors, she’s won several awards, including Romantic Times’s Career Achievement Awards in both category and contemporary single title.

Currently writing a new Honeymoon Harbor series for HQN set on the Washington peninsula, that will launch in April, 2018, JoAnn lives with her husband (her high school sweetheart, who proposed at the sea wall where her Shelter Bay books are set), in the Pacific Northwest.