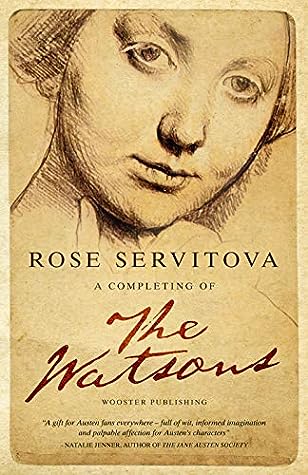 One of my favorite authors in all of English Literature is of course, Jane Austen. She is the definition of classic if you ask me. She always writes timeless love stories and memorable but also relatable heroines.

Because she is such a popular author, many contemporaries have admired her so much that they put their own modern spin and style to their Austen retellings.

In this book, Servitova brings her own wit and humor to this lovely retelling and I am thrilled to be able to share an excerpt with you guys here!

Emma Watson returns to her family home after fourteen years with her wealthy and indulgent aunt. Now more refined than her siblings, Emma is shocked by her sisters’ flagrant and desperate attempts to ensnare a husband. To the surprise of the neighbourhood, Emma immediately attracts the attention of eligible suitors – notably the socially awkward Lord Osborne, heir to Osborne Castle – who could provide her with a home and high status if she is left with neither after her father’s death. Soon Emma finds herself navigating a world of unfamiliar social mores, making missteps that could affect the rest of her life. How can she make amends for the wrongs she is seen to have committed without betraying her own sense of what is right?

Jane Austen commenced writing The Watsons over two hundred years ago, putting it aside unfinished, never to return and complete it. Now, Rose Servitova, author of acclaimed humour title, The Longbourn Letters: The Correspondence between Mr Collins and Mr Bennet has finished Austen’s manuscript in a manner true to Austen’s style and wit. (Summary from Goodreads)

On the third day after the ball, as Nanny, at five minutes before three, was beginning to bustle into the parlour with the tray and knife-case, she was suddenly called to the front door by the sound of as smart a rap as the end of a riding-whip could give. Though charged by Elizabeth to let nobody in, she returned in half a minute with a look of awkward dismay to hold the parlour door open for Lord Osborne and Tom Musgrave. The surprise of the young ladies may be imagined. No visitors would have been welcome at such a moment but such visitors as these – such a one as Lord Osborne at least, a nobleman and a stranger, was really distressing.

He looked a little embarrassed himself as, on being introduced by his easy, voluble friend, he muttered something of doing himself the honour of waiting upon Mr Watson. Though Emma could not but take the compliment of the visit to herself, she was very far from enjoying it. She felt all the inconsistency of such an acquaintance with the very humble style in which they were obliged to live. Having in her aunt’s family been used to many of the elegancies of life, she was fully sensible of all that must be open to the ridicule of richer people in her present home. Of the pain of such feelings, Elizabeth knew very little. Her simple viewpoint, or juster reason, saved her from such mortification; and though shrinking under a general sense of inferiority, she felt no particular shame.

Mr Watson, as the gentlemen had already heard from Nanny, was not well enough to be downstairs. With much concern they took their seats, Lord Osborne near Emma and the convenient Mr Musgrave, in high spirits, on the other side of the fireplace, with Elizabeth. When Lord Osborne had hoped that Emma had not caught cold at the ball, he had nothing more to say for some time and could only gratify his eye by occasional glances at his fair neighbour. Emma was not inclined to give herself much trouble for his entertainment and after hard labour of mind, he produced the remark of it being a very fine day and followed it up with the question of, “Have you been walking this morning?”

“You should wear half-boots.” After another pause, “Nothing sets off a neat ankle more than a half-boot; nankeen galoshed with black looks very well. Do not you like half-boots?”

“Yes, but unless they are so stout as to injure their beauty, they are not fit for country walking.”

“Ladies should ride in dirty weather. Do you ride?”

“I wonder every lady does not. A woman never looks better than on horseback.”

“But every woman may not have the inclination, or the means.”

“If they knew how much it became them, they would all have the inclination and I fancy, Miss Watson, when once they had the inclination, the means would soon follow.”

“Your lordship thinks we always have our own way. That is a point on which ladies and gentlemen have long disagreed. Without pretending to decide it, I may say that there are some circumstances which even women cannot control. Female economy will do a great deal my lord but it cannot turn a small income into a large one.”

Lord Osborne was silenced. Her manner had been neither critical nor sarcastic but there was a something in its mild seriousness, as well as in the words themselves, which made his lordship think. When he addressed her again, it was with a degree of considerate propriety totally unlike the half-awkward, half-fearless style of his former remarks. It was a new thing with him to wish to please a woman. It was the first time that he had ever felt what was due to a woman in Emma’s situation but as he wanted neither in sense nor a good disposition, he did not feel it without effect. Pages 58-60

3 thoughts on “Excerpt: A Completing of the Watsons by Rose Servitova”