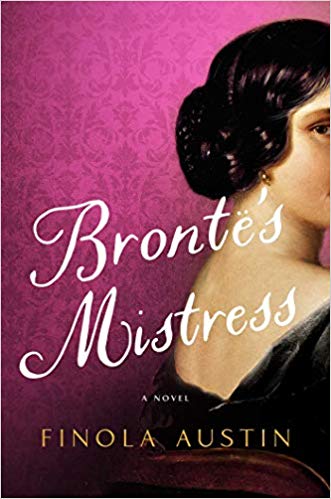 To say that I am a Bronte fan is the biggest understatement of the year. When I saw that this book was coming out, I couldn’t wait. That feels like a horrible understatement itself but the anticipation was at a fever pitch for me!

The cover is to die for and the premise of this book sounds so promising. I am reading it later this month and will get a review up here once I am done, but for now since the book is releasing this week, I am thrilled to offer you guys a little sneak peak with this lovely excerpt.

If you love the Bronte’s as much as I do, then this is the book you have been waiting for. Don’t wait to get your hands on this one. It’s already getting rave reviews and I just can’t tell you how excited I am for it!

Yorkshire, 1843: Lydia Robinson—mistress of Thorp Green Hall—has lost her precious young daughter and her mother within the same year. She returns to her bleak home, grief-stricken and unmoored. With her teenage daughters rebelling, her testy mother-in-law scrutinizing her every move, and her marriage grown cold, Lydia is restless and yearning for something more.

All of that changes with the arrival of her son’s tutor, Branwell Brontë, brother of her daughters’ governess, Miss Anne Brontë and those other writerly sisters, Charlotte and Emily. Branwell has his own demons to contend with—including living up to the ideals of his intelligent family—but his presence is a breath of fresh air for Lydia. Handsome, passionate, and uninhibited by social conventions, he’s also twenty-five to her forty-three. A love of poetry, music, and theatre bring mistress and tutor together, and Branwell’s colorful tales of his sisters’ elaborate play-acting and made-up worlds form the backdrop for seduction.

But Lydia’s new taste of passion comes with consequences. As Branwell’s inner turmoil rises to the surface, his behavior grows erratic and dangerous, and whispers of their passionate relationship spout from her servants’ lips, reaching all three protective Brontë sisters. Soon, it falls on Lydia to save not just her reputation, but her way of life, before those clever girls reveal all her secrets in their novels. Unfortunately, she might be too late.

Meticulously researched and deliciously told, Brontë’s Mistress is a captivating reimagining of the scandalous affair that has divided Brontë enthusiasts for generations and an illuminating portrait of a courageous, sharp-witted woman who fights to emerge with her dignity intact.

I walked until I reached the Monk’s House, which was shrouded in darkness. The Sewells, like most of the other servants, had not yet returned. Only one light burned in one of the upper rooms—Mr. Brontë’s room.

Would he be preparing Ned’s lessons or reading a letter from Charlotte or Emily? There was a chance he was tinkering with his poetry. Whatever the pattern of his solitary hours, he would set everything aside were I to come to him, were I to let him see me with my face red and tears in my eyes. And it wouldn’t just be for manners’ sake. He would understand.

But I couldn’t go in, could I? Just about visible through the gloom was the white statuette of the monk himself. The figure, hood worn so low it covered his face, had watched over the entrance to the Monk’s Lodge for centuries from his niche above the door. One of his hands was raised, making the drapery of his robes uneven. I hadn’t thought it before, but perhaps his hidden gesture was a warning or a threat, not a blessing.

The front door opened at my touch. I stepped inside.

It looked the same: narrow, uncarpeted, with low, dark beams and an uneven central staircase. The hallway was empty except for a stand, which held a broken umbrella and a pair of Tom Sewell’s discarded boots.

I had not been in the Monk’s House above a handful of times since the morning after our honeymoon. Edmund had led me by the hand from building to building and from room to room of my new home.

“You are mistress here, and here, and also here,” he’d said. “The bells of Holy Trinity have been ringing out your arrival. They will fête you in the villages.” He twirled me so hard I nearly fell, but then caught me just in time and pushed me up against the wall to kiss me.

I gave the place little notice then, for all it was a fine house, beautifully preserved and unmistakably English, with its sloping roofs and lattice windows. I’d cared only for the Hall. I would drape curtains fit for the stage in my dressing room just to see Mother gasp at the expense. I’d take inspiration from the Venetian frescoes I’d just seen for our dining room. I thought then they’d never fade from my memory. And I’d commission a great fountain to make a feature of the stew pond.

“It’s allegorical,” I would say with a wave of my hand, when my unmarried friends came to marvel at my good fortune. “Edmund, my husband, can explain the mythological subject.”

But a month later, I was pregnant, sick to my stomach, and fretful when I slept. My grand schemes evaporated faster than Edmund’s ardor and sounded as distant as Italy’s opera houses. Soon I was unable to either sit or stand with ease, and the doctor prescribed rest. My own mother came to nurse me, and Edmund’s mother extended the time she was to live with us, reclaiming her dominion over the household. She, just as domineering then as she’d been tonight, hung floral chintz curtains in my dressing room, in the very same material she now had in her own.

“Mr. Brontë?” I called from the bottom of the stairs, hanging on to the wooden banister, but afraid to venture any farther, get any closer.

I climbed the first step with my left foot, as always. The habit brought me some comfort, but a lump was rising in my throat.

The second. The house gave a great groan. It knew I was here. This was foolish. The third, taking two steps this time, regardless of the pattern. I would go to him. And then?

I paused. Something had caught on my hand. A splinter.

He would understand if only I could find the words with which to confide in him.

Other young men might think it improper, my coming here, but he would not care for such niceties. Our conversation in “the woods” had confirmed this. And what was it the Reverend Brontë had said? Mr. Brontë and his sisters were children raised by the moors.

I cupped my eyes with my hand to protect them from the light that streamed across the landing. His door was ajar.

Maybe when he saw me, he would take me in his arms, and I would have no choice but to melt into him. His kisses would be fevered like my bridegroom Edmund’s, drinking deep of me, his hand guiding me by the waist, drawing me down.

Finola Austin, also known as the Secret Victorianist on her award-winning

blog, is an England-born, Northern Ireland-raised, Brooklyn-based historical novelist and lover of the 19th century. By day, she works in digital advertising. Find her online at FinolaAustin.com. Brontë’s Mistress is her debut novel.

One thought on “Excerpt: Bronte’s Mistress by Finola Austin”