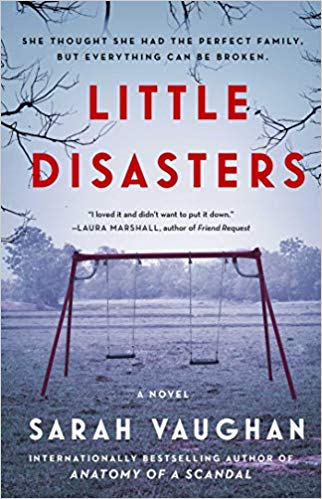 This book is one that I am so excited to share with you all on a personal level. Not only does it sound like it’s going to tackle some big issues that women face but the author’s own personal story about how she came to write this book is so memorable!

You will have to keep reading to see what I mean about the author’s own story down in an article that I included from Publisher’s Weekly. The article is outstanding and really captures the excitement of this novel. She sounds like she has been through so much and that it was important for her to get the details of this book right and I can’t help but be intrigued by that dedication and her story!

This book sounds like it’s going to be a thriller that taps into mom life. Women face such interesting challenges in the professional world as well as the domestic world and it’s always an interesting topic to explore which is why I am really looking forward to this one. Keep reading to get all the details!

A new thought-provoking novel exploring the complexity of motherhood and all that connects and disconnects us.

You think you know her…but look a little closer.

She is a stay-at-home mother-of-three with boundless reserves of patience, energy, and love. After being friends for a decade, this is how Liz sees Jess.

Then one moment changes everything.

Dark thoughts and carefully guarded secrets surface—and Liz is left questioning everything she thought she knew about her friend, and about herself. The truth can’t come soon enough. (summary from Goodreads)

Sarah Vaughan’s New Novel Lurks in the Shadows of Motherhood

With her latest novel, bestseller Sarah Vaughan uncovers a hidden inner turmoil she knows all too well

Sarah Vaughan smiles from behind the desk in her bright home office, where laundry also gets folded and visiting guests spend the night. The window behind her looks onto her garden, which spills into the sprawling green fields behind her Cambridge, England, home. She looks comfortable sitting with a wall of books at her back. All this is plain through a Zoom call in the early days of the coronavirus lockdown.

“All of my novels, so far, have been quite cathartic and taken elements of my personality,” says Vaughan, whose fourth novel, Little Disasters (S&S/Bestler), publishes in the U.S. on August 18. “Writing shouldn’t be therapy, but inevitably it often is. A sexual assault I’d experienced in my early 20s. The darkest reaches of motherhood…. They all show up.”

Vaughan’s last book, Anatomy of a Scandal (2018), secured her commercial foothold. The idea for Scandal began germinating as far back as 2004. That’s when Vaughan, then a correspondent for the Guardian, interviewed a just-fired member of Parliament named Boris Johnson. Johnson had been “sacked” for lying about an affair. What struck Vaughan wasn’t the affair, it was his ease in lying about it. “It was the first time I’d interviewed someone with such a clear, relaxed attitude toward the truth,” she says.

Vaughan started writing Anatomy in 2016, finishing the manuscript in nine months. Part courtroom drama, part portrait of a marriage, and part psychological thriller, it follows a female barrister prosecuting a rape case in which the prime minister’s best friend is the defendant. It drew, she says, on her own experiences to “explore power, privilege, and consent.”

Anatomy spent 10 weeks on the Sunday Times bestseller list, and Netflix announced in May its plans to adapt the novel into a six-part miniseries.

Little Disasters, which grips and guides readers into dark moments of motherhood, is the novel most deeply rooted in Vaughan’s own life. She was 19 weeks pregnant with her second baby in July 2007 when she collapsed in the street and crawled home. A condition called pelvic girdle syndrome left her bedridden for the rest of the pregnancy and barely able to walk for a year. Vaughan’s difficult pregnancy forced a sudden, silent shift—from an identity built around her work as a journalist to one of unfamiliar isolation, with no friends or family nearby. Although never diagnosed, Vaughan believes she suffered from postnatal anxiety and mild maternal obsessive-compulsive disorder, or OCD. “For some postnatal mothers, OCD takes the form of intrusive thinking about harming their baby,” she explains.

Little Disasters’s protagonist, Jess Curtis, may be gripped by a similar demon. A stay-at-home mother of three, Jess is battling postpartum depression when she lands in the hospital with her 10-month-old daughter. The baby’s injuries leave authorities, as well as Jess’s friends and family, wondering if Jess herself could have harmed her baby. Vaughan builds the domestic thriller around the central question: why? Research helped her answer it. She interviewed several pediatricians, a perinatal psychiatrist, an obstetrician, a retired detective, and social workers. “I needed to get the details right,” she says. Those efforts paid off. Simon & Schuster UK released the book in April in England, while Vaughan and most of the world were locked down at home. But she has been reading, virtually, for events—and enjoying rave reviews.

“Sarah’s novels feature women who are navigating their roles as wives, mothers, and daughters, but who often also have other great responsibilities—lawmakers, doctors, politicians,” says Lizzy Kremer, Vaughan’s literary agent. “And they enact this work with the same attention and loving commitment. She shows us that these ordinary women are achieving extraordinary things, sometimes against the odds, and that it is up to each of us to draw the line between the public and the personal, between right and wrong, between revenge and forgiveness.”

For Vaughan, strong characters have been lifelong companions. As an undergraduate at Oxford, she studied literature and read Henry James. “It literally didn’t occur to me that anyone other than dead white men or Virginia Woolf could write a novel. So when Zadie Smith got her deal for White Teeth, I remember being really astounded that a young English woman could get a book contract.”

After Oxford, Vaughan spent a year waiting tables. She moved on to spend three months at the Times, before landing a trainee spot at the Press Association, a British news agency. Editors sent the young reporter with brisk shorthand straight into the courtroom. “I was suddenly observing how dramatic court cases could be,” she says. “It was the absolute best training for me.” After 18 months, she joined the Guardian as an intern. It was August 1997.

That’s when she got an unforgettable call—about Princess Diana. Vaughan had been out clubbing and “was lying on the floor trying to work out why the room was spinning,” she recalls, when her news editor told her there had been an accident. “I couldn’t really compute. They told me not to come in immediately, but to set my alarm early. At six, the clock radio kicked in, and the presenter was talking about Diana in the past tense. Adrenaline sobered me up pretty swiftly.” She raced into the newsroom and wrote a 2,000-word story about the tragedy.

She spent 11 years at the Guardian as a news reporter, a health correspondent, and a political correspondent. After having her second baby, she took a voluntary buyout. She and her physician husband bought a house in Cambridge, where he had taken a new job, and she did it up. It’s where they’ve raised their daughter, now 15, and son, now 12.

“I started to write for Mother & Baby magazine and the Guardian,” she recalls. “But I hated pitching ideas as a freelancer rather than being in a newsroom. I found it really demoralizing. When I was on staff covering Parliament, there was lots of banter. Blair was prime minister; I felt at the heart of things.”

She turned 40 the week her son started primary school. An idea had been gestating. She talked with her husband, and they agreed: Vaughan was going to commit herself to writing a book within a year. “I knew nothing about writing a novel, but I knew I had to give myself a deadline.” After a few months and 66,000 words, Kremer had a manuscript for The Art of Baking Blind, about motherhood and the impossibility of perfection.

“I was intrigued about the mothers I saw around me: really highly qualified, capable women, flinging so much energy into the cakes they cooked up for school bake sales,” Vaughan says. The book was published in the U.K. in 2014 by Hodder and went on to be published in nine other countries, including the U.S., where St. Martin’s released it in 2015. Her second novel, The Farm at the Edge of the World, came out in 2016. It told a story of family and loss, and became a bestseller in France in 2017. Anatomy came next, and it led readers to a place where personal and professional experiences collide. Vaughan was ready to go there, too.

Disasters emerged on the other side of her own valley in early motherhood. She didn’t have the extreme, disproportionate thoughts of Jess, but she understood how she could. “I was so riddled with doubt and my sense of self was so diminished,” Vaughan says. “I had been in control. Suddenly, I had nothing to show for my days other than I’d made soup and roasted a chicken.”

Vaughan’s research taught her that depression affects some 10%–15% of women postpartum, but just 2%–3% suffer obsessive-compulsive disorder. It often shows up in very perfectionist, high-achieving women, she says. They may have had OCD when they were young. It gets submerged, and then a trauma triggers it. Exercise, finding friends, and cognitive behavioral therapy helped Vaughan most. That, and writing.

Women have written to Vaughan, saying that Disasters helps explain these deep and alarming shadows of motherhood. “Women are talking with their partners, saying, ‘I’ve never read anything about this before, and I realize I’m not going crazy,’ ” Vaughan says. “They’re not alone anymore.” She can imagine their relief.

From her own sunny desk at home, Vaughan has let the light stream in.

Victoria Scanlan Stefanakos has written for Newsweek, Forbes, and Working Mother and, as a mother of two teenagers, is fascinated by psychology.