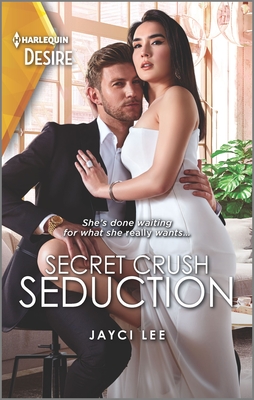 While I might be gearing up for all my favorite fall reads, which usually include a ton of mysteries and thrillers rather than romances, ever once in a while a romance catches my eye.

I love this romance novel cover and of course with it being a Harlequin novel, I know it’s going to be a good one!

Today I have this upcoming billionaire style romance up for special feature including an excerpt. If you are looking for a shot break from all the murder mysteries that are coming out, then look no further than this book right here!

She’s done waiting for what she really wants…

Aspiring fashion designer Adelaide Song wants to prove she’s more than just a pampered heiress. All she needs is a little courage—and the help of deliciously sexy Michael Reynolds, her childhood crush and her brother’s best friend. But when her secret crush turns into an illicit liaison, Adelaide realizes mixing business with pleasure spells trouble for all her plans…

With a jolt of alarm and a rush of air, he and Adelaide were suddenly standing at opposite ends of the kitchen table before his mind grasped what had happened. After several steadying breaths, he heard quiet, slippered footsteps coming down the hallway.

“Michael. Thank you for coming.” Mrs. Song stood in front of him with her hand extended. Her voice sounded faraway and muted, as though he was sub-merged under water. Somehow, he managed to fit his hand around hers, which she pulled back after a gentle squeeze. He noticed Adelaide’s father standing next to her.

“Mrs. Song,” he said, bending lightly at the waist in a proper greeting to both elders. “Mr. Song. It’s great to see you.”

“James. For heaven’s sake, Mike. I’ve been asking you to call me James for over a decade.” Adelaide’s fa-ther smiled widely and slapped him on the back. “I miss my son’s stoic mug. The least you could do is visit more often. Plus, you’re the polar opposite of Garrett, so I’d enjoy your company more.”

“Anytime, James.” Michael laughed, unaccountably pleased. Not that he’d ever admit it, but he missed his best friend, too.

“That was a lovely reunion.” Adelaide’s tart comment brought him to a full stop.

He searched her face, but her cheeky, playful facade hid her true thoughts from him. It was a Song family superpower. They could don any mask in a split second and hide all their feelings behind it. It was annoying as hell on a good day, but he hated those masks with a vengeance now.

Backing away from his turbulent thoughts, Michael started setting out the banchan on the informal kitchen table, reserved for casual family dinners. Once he was done putting out the small plates of accompaniments for the rice, next came the bowls of rice themselves, customized for each person’s appetite. Slightly below the rim of the bowl for Mrs. Song and piled in a gentle curve above the rim for James. He couldn’t help but smile when Adelaide handed him a bowl, piled high like shaved ice.

“Oh, you remembered,” he teased. Maybe they could pretend nothing happened earlier.

“Of course, I remembered. I cook double portions when you and Garrett are around. I’m surprised you guys don’t inhale the table.” Her tone was light and casual, but she didn’t meet his eyes. “Let’s go eat.”

Although he was distracted by their almost kiss, the home-cooked meal tasted fantastic. It nourished him, body and soul. Michael hoped it carried him through what she had planned for them.

She picked at her food, hardly eating anything at all, and took nervous peeks at her grandmother and him. Michael didn’t like that. He didn’t like it at all. When she put her spoon down and sipped her water, he tensed for whatever was coming.

“Hal-muh-nee,” she said, pausing to clear her throat. “Michael and I wanted to ask your permission to work on a charity event on behalf of Hansol.”

He nearly choked on a mouthful of short ribs.

“The two of you? A charity event?” James said, looking back and forth between them.

“Yoon-ah.” Mrs. Song usually switched to her grandchildren’s Korean names as a sign of affection or when she needed to soften the blow. “I don’t think you’re—” “I’m not asking for a permanent position at Han-sol. At least not yet,” Adelaide interrupted, desperation creeping into her voice. “I know you’ve been holding me back because I’ve tarnished our family’s reputation before, but this could be my chance to turn that around. A chance to show the public that the youngest of the Songs has her act together.”

The eldest Song pressed her lips together with an in-scrutable expression. Adelaide took that as her cue to continue. “And I know better than anyone I don’t have much hands-on experience. That’s why Michael has offered to help.”

The water he’d gulped after choking on the short ribs went down the wrong pipe, throwing him into a coughing fit. What the hell? I offered? Michael should stop this train wreck but shock and panic rampaged through his mind. He didn’t trust himself to be alone with Adelaide for more than a few minutes. There was no way he could spend extended periods of time with her and not slip up.

“Both of you trust and respect Michael, and he is our family’s PR specialist. He could help me make the right decisions for the charity event, and maximize the chance to rehabilitate my wild-child image.”

The table was eerily silent as Mrs. Song gazed down at her folded hands. Then she raised her head with a sigh.

“My reasons for ‘holding you back,’ as you put it, are not what you think,” she said softly. Michael gripped the sides of his chair. Adelaide deserved this chance, and he desperately wanted it for her even though she had chosen the wrong way to get it. “But I think your idea has promise, and your enthusiasm tells me you are determined to succeed.”

“Don’t thank me, yet. I have no intention of helping you, because this is your project and you must succeed on your own. You’re going to have to go through the proper channels at Hansol to receive the funds to put together the event. While Michael’s guidance would be appreciated, he could only advise you, not make your decisions for you.” Grace Song’s expression grew a shade harder. “Adelaide, you will be representing Han-sol in your endeavors. You must act with utmost professionalism, and I don’t want so much as a whiff of scandal surrounding you while you’re working on be-half of Hansol. Remember, the company has a very proficient CSR department, which is capable of taking over the event if the need ever arises.”

“I won’t forget.” Adelaide lifted her chin. “I won’t disappoint you and Dad.”

California with her tall-dark-and-handsome husband, two amazing boys with boundless energy, and a fluffy rescue whose cuteness is a major distraction. She is semi-retired from her 15-year career as a defense litigator, and writes full-time now. She loves food, wine, and travelling, just like her characters. Books have always helped her grow, dream, and heal. She hopes her books will do the same for you.