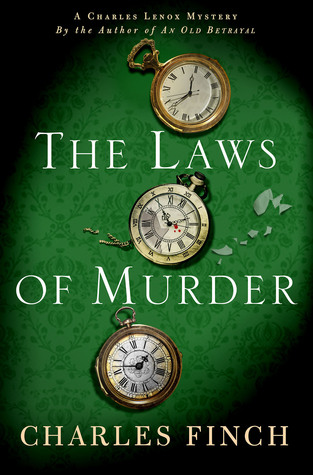 As we get ready to celebrate the release of Charles Finch’s latest Charles Lenox novel, THE LAWS OF MURDER on 11/11/14, I am participating in a special WHODUNNIT feature!

This feature was written by Charles Finch and focuses on the importance of “WHY” in WHODUNNIT’ novels! Be sure to pre-order your copy of THE LAWS OF MURDER here and you can also check out a Charles Lenox quiz by clicking here.

Make sure to visit my review and enter for a change to win a copy of the latest novel on my blog this week as well!

Who, what, where, when, why.  Those are the five questions I’ve tried to answer on this blog tour, and the hardest one comes at the end of the list, just as the hardest questions in a novel start to get answered just as the pages begin to thin out.

Why mystery novels?  For me, the answer is easy and impossible.  Easy: I picked up A Study in Scarlet when I was eleven or so, read it in one sitting – people say that as an exaggerated indication of their absorption in a book, but I mean it literally – and then chased down every story I could find about Sherlock Holmes, reading them over and over and over, until I reluctantly moved on to writers who were nearly as magic, Agatha Christie, Dick Francis, Elizabeth George, Dashiell Hammett.

But impossible, too: What is it about mystery novels?  What kind of person escapes into murder and mayhem and enigma?

They say the best thing to do for children is to give them a safe and predictable structure, and then total freedom within that structure.   That’s probably why Hogwarts is so appealing; it’s a safe and ordered place (for a few books at least), but once you’re inside it you can fly, you can cast spells, you can do anything.

Mystery novels are a variation on that model, I think.  The Holmes stories, for instance – in all of them, Holmes and Watson snuff out the danger and end up back in the same place, 221b Baker Street.  There they have their fireplace, their VR shot into the wall, the tobacco in the slipper, and the supremely English Mrs. Watson downstairs to bring them their telegrams.  That is to say, that in the Holmes stories a funny, wonderful version of Victorian domesticity is restored – it may be eccentric, but it is safe, and secure.  It’s a port in the storm.  And it completes the circle: in most of the stories we start out in a well-ordered Victorian drawing room, with a confused but well-meaning Englishman or Englishwoman; a threat is introduced against that person; Holmes understands and neutralizes the threat; and by the end of the story we return to the drawing room again, to a wonderful vision of life in Baker Street.

Indeed, when I pick up Sherlock Holmes now it’s often if I’ve had a long week, or even if I’m a bit under the weather.  Almost as much as the mysteries themselves I like to visit Holmes and Watson in their rooms, sitting by the fire on a stormy London night.  And that feeling of sanctuary is what I think Holmes’s contemporary readers found, too.  Whether they entirely understood it or not, the Victorians were building a society that pointed towards our modern society – less bloodthirsty, more ordered, gentler.  The stories of Sherlock Holmes acknowledged the perils of that struggle, but promised that the society at the end of it would be a better one.

That may seem like a limited example – think of the bloodthirstiness of Thomas Harris, the moral weariness of Raymond Chandler, the compromised victories of Elmore Leonard.  But for my own why – well, I write Victorian mystery novels, and while I try hard to make them realistic, talking about the poverty and violence of the time, not just the Dukes and Duchesses, I also admit that they have an element of reassurance.  My detective, Charles Lenox, always ends up back at home in front of the fire too.  We visit dark places with him; but there’s a way back from Mordor.  The greater whys of life, why are we here, why do people die, why is there suffering, the questions you think a book about death ought to answer – well, all of those can wait until we’re done with this next chapter…

One thought on “Special Feature: WHODUNNIT and WHY?”